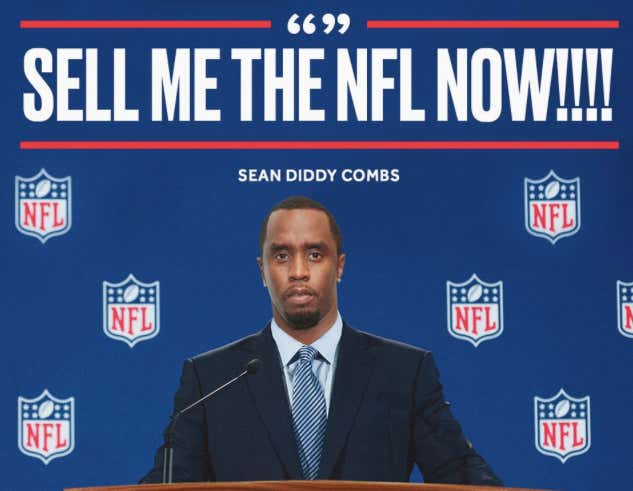 Source –  Everyday there’s a new story that combines at least two (and sometimes all) of the following: the NFL, the national anthem, players protesting, fan reactions, and owners/league brass trying to figure out how to respond to this while alienating as few customers as possible.

On Tuesday, a report that claimed NFL owners might create a new rule forcing players to stand for the anthem made headlines that caught the eye of Diddy, who then sent it out to his social media followers while revealing his dream just went from buying an NFL team to buying the entire league.

Great. He’ll have to pinch some pennies or find some super wealthy investors (his net worth is $820 million, while the average team alone is said to be worth $2.3 billion) but it sounds like a plan.

Is there anyone who embodies the American dream more than Puff Daddy? He went from the streets of Harlem, to the top of the Billboard charts, to proud owner of thirty-two NFL teams. What a story. What I would give to be a fly on the wall during those negotiations. “Mr. Daddy, we’re looking for around $73 billion. Do you have a counter?” “How about five-hunnit-million, and Ciroc…FOR LIFE?!” “Done!”

No more of this do I sit, do I stand bullshit. Diddy’s bringing people together with the power of dance. Footage of the official 2019 TD celebration dance is already leaking all over the internet.

Not to brag but I saw the purchase coming years ago. Talked about it on Letterman in 2008. Just goes to show that with some hard work and a little luck you can do anything you put your mind to.