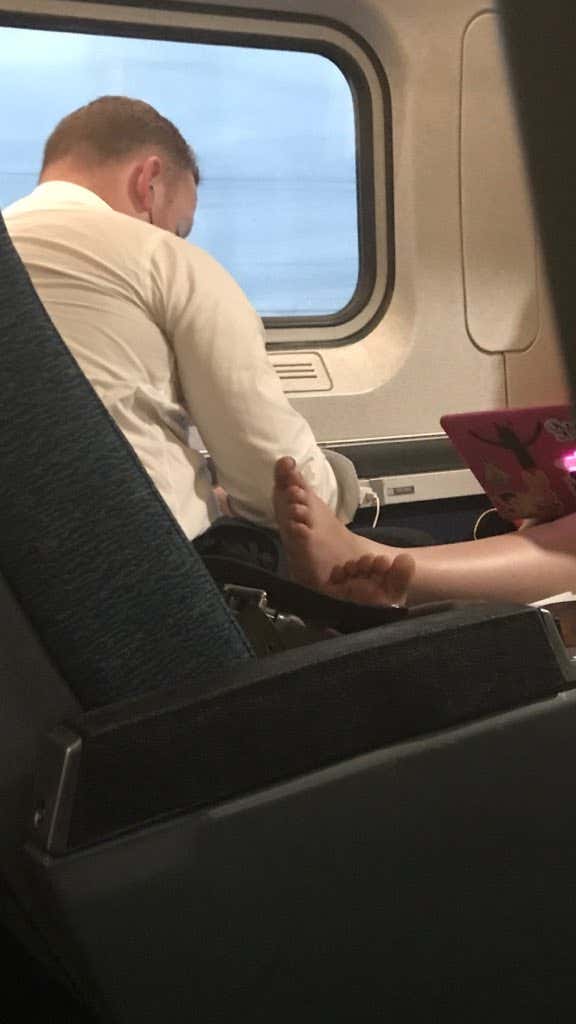 Yesterday, the Zero Blog Thirty squad went down to DC to tackle some interviews with some congressmen and whathaveyou. It was a successful day. We hopped on the train, were ready to crush some train beers, and gameplan for the rest of the week. Well, the train was pretty fucking full so we had to split up and fend for ourselves. Radio Bren, our producer, was in one seat. I was across from him, and Cons was a row ahead of us. Cons was sitting pretty at first.

But then all hell broke loose. Two larger, lispy, and loud ladies lumbered lazily into their seats. Those seats were with Captain Cons. When they first sat down, an ENITRE backpack of shit spilled onto Connor. He was wearing a nice suit and there was a cacophony of garbage in his lap. Old candy wrappers. Pencil shavings. Just straight up garbage. Connor was so damn nice about the whole thing. “It’s ok. It’s ok. No worries at all.” A true officer and a gentleman. I knew Connor was actually upset, though. He didn’t even tell the people sitting with him that he went to West Point. He must have been furious.

The ladies sitting beside him were loud as hell too. They were talking about why kissing cats is actually better than kissing dogs. They said, “kissing cats is much more special because cats arent known to kiss. So you know when a cat kisses you, they mean it. A dog could be doing it out of instinct.”

Now I dont know when people started attributing Pretty Woman characteristics to pussycats, but I won’t allow this. Cats arent fucking hookers, man. They dont have some sort of inherent value system where kissing is off limits because it’s too intimate. Preposterous. I’m not saying that you cant dress your cat up and take it out for a nice little evening out. You gotta be able to allow the cat to go to a high-end boutique and pick up something really nice and classy for dinner. Next thing you know, the help at the store are thumbing their nose at the pussy. They dont wanna pick a dress out for the pussy. They dont wanna even offer some kibble for the pussy. So, they aint getting the American Express from this pussy. “You made a big mistake. Huge,” says the pussy. (talkin cats, folks. Not vagina)

And then the unthinkable happened. The woman put her feet up right next to Connor.

They were seconds away from playing footsie with her foot and his dick. It was like Connor had sat across from the overweight, Hello Kitty enthusiast version of the 1985 classic French film L’attenzione, which was, lest we forget… a coming of age tale of love and lust shaded with overtones of incest and lesbianism. Very intriguing!

After she got done sexually stimulating my co-host, she walked to the diner cart and came back with three hot dogs and two large apple juices. The ride was over. Connor had reached his stop. He got up, collected his belongings, retrieved his suit’s jacket from under the pile of rubble that our new friend had laid on top of it, and he went home to cry. I dont blame him. I too love new love. Maybe summer isnt over just yet. Incredible.