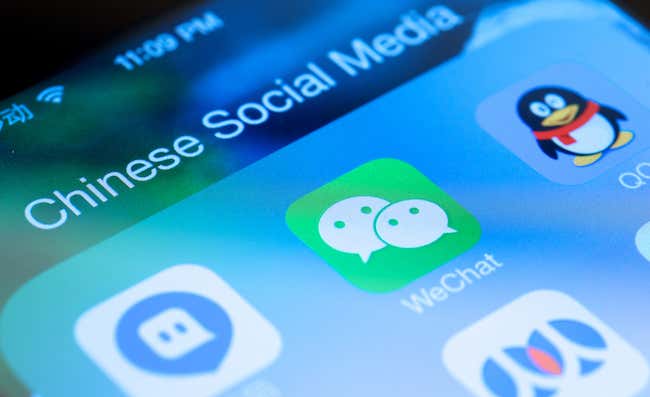 When it comes to the tech-world, Chinese hasn’t always been on the forefront of innovation. Many of their most popular Apps are just direct rip-offs of their American counter-part. Chinese Twitter is called Weibo. Chinese Youtube is called Youku. China Tinder is called TanTan. Alibaba, while not exactly the same, was at least inspired by Amazon.  However, that all changed when they came out with WeChat in 2011. I’ll be honest, at first I just thought it was cool because it let you send GIFs and voice messages to friends and groupchats, features US social media apps didn’t release till YEARS later. But since then it’s become an absolute behemoth with a billion monthly active users. I can now use WeChat to pay for goods at physical stores, settle utility bills, split dinner tabs with friends, book and pay for taxis, get dumplings delivered, buy movie tickets, book a hospital appointment, share photos, and while I haven’t experimented with this personally, solicit sex.

A year or two ago they added this nifty translation function which has made it 100Xs easier for me to communicate with Chinese people. For example, say if Hu Ayi sends me a message completely in Chinese, I just long press the message, hit translate, and voila, we are setting up the next episode of Gooned Up.  I haven’t given her the green-light to quit her day job and make Rangoons with me all week quite yet but hopefully someday. 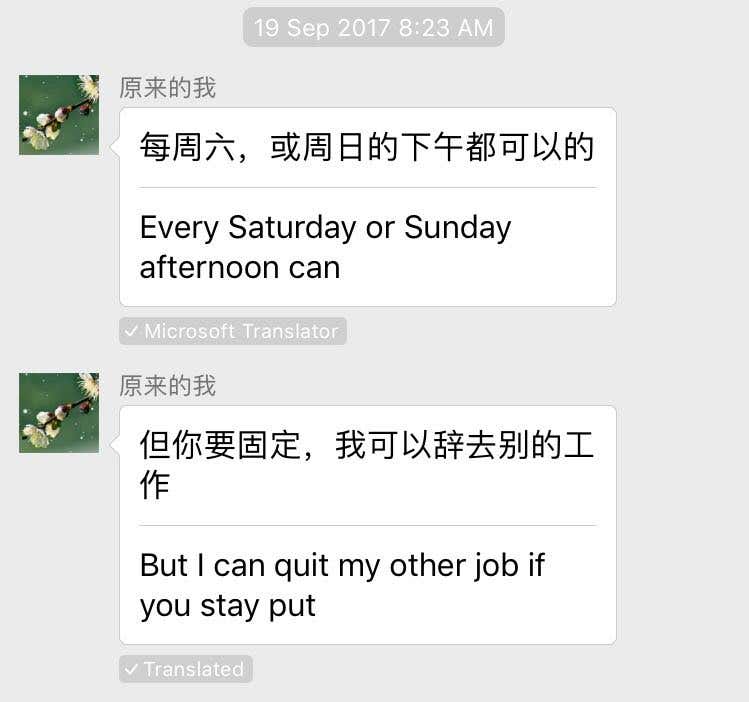 Sometimes the literal translations WeChat uses can be pretty damn funny. My new favorite hobby is translating the conversations in the “Chinese Patriots Fans” groupchat I’m in  whenever some NFL drama breaks out. Below is their discussion of Forester’s coke video. You heard it here first folks, The Big Fish is going to die this year, most likely due to absorbing too much powder. 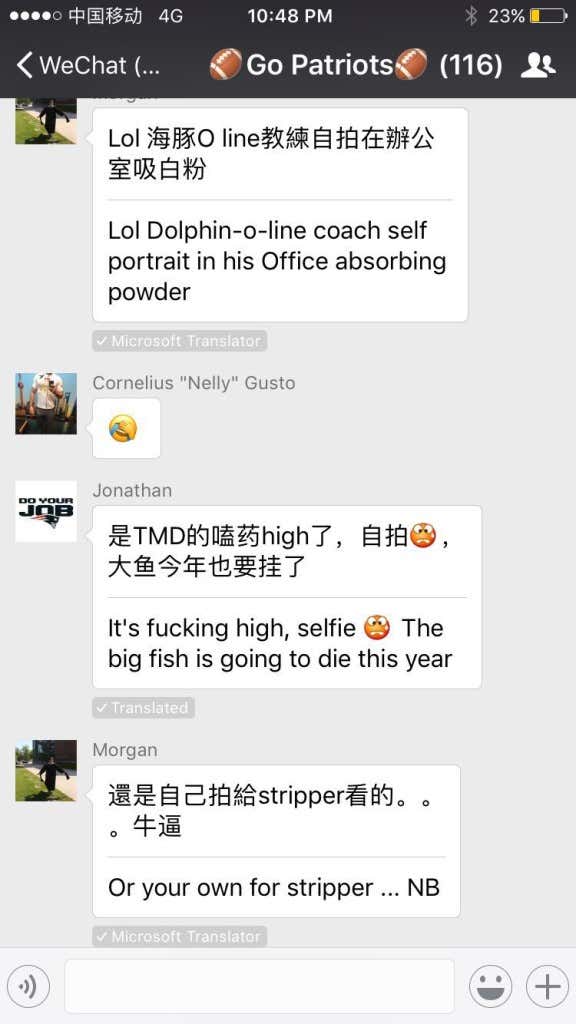 HOWEVA, this is where the story takes a dark turn, as recently, it was discovered that this nifty translation feature translates the Chinese characters for “black foreinger”, ???(Hei Lao Wai), into…the N word. 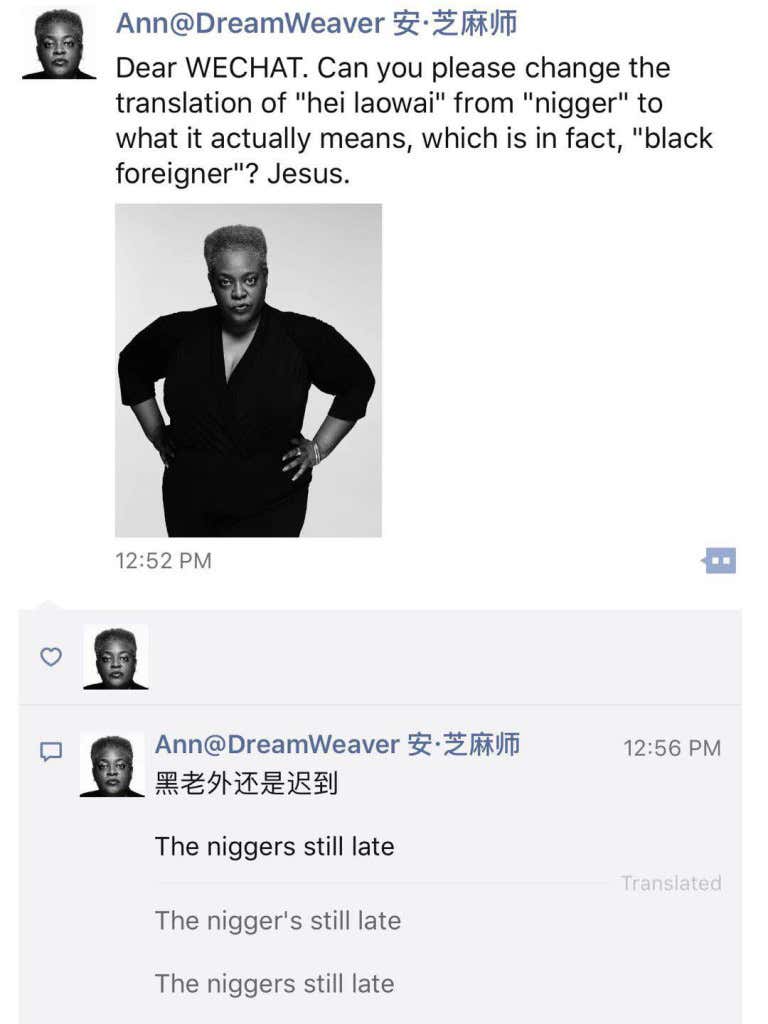 And the plot thickens AKA gets even more racist. The magazine Thats Shanghai did some research and it turns out the app would only use the N-bomb translation when “black foreigner” was used in a negative connotation. See below. 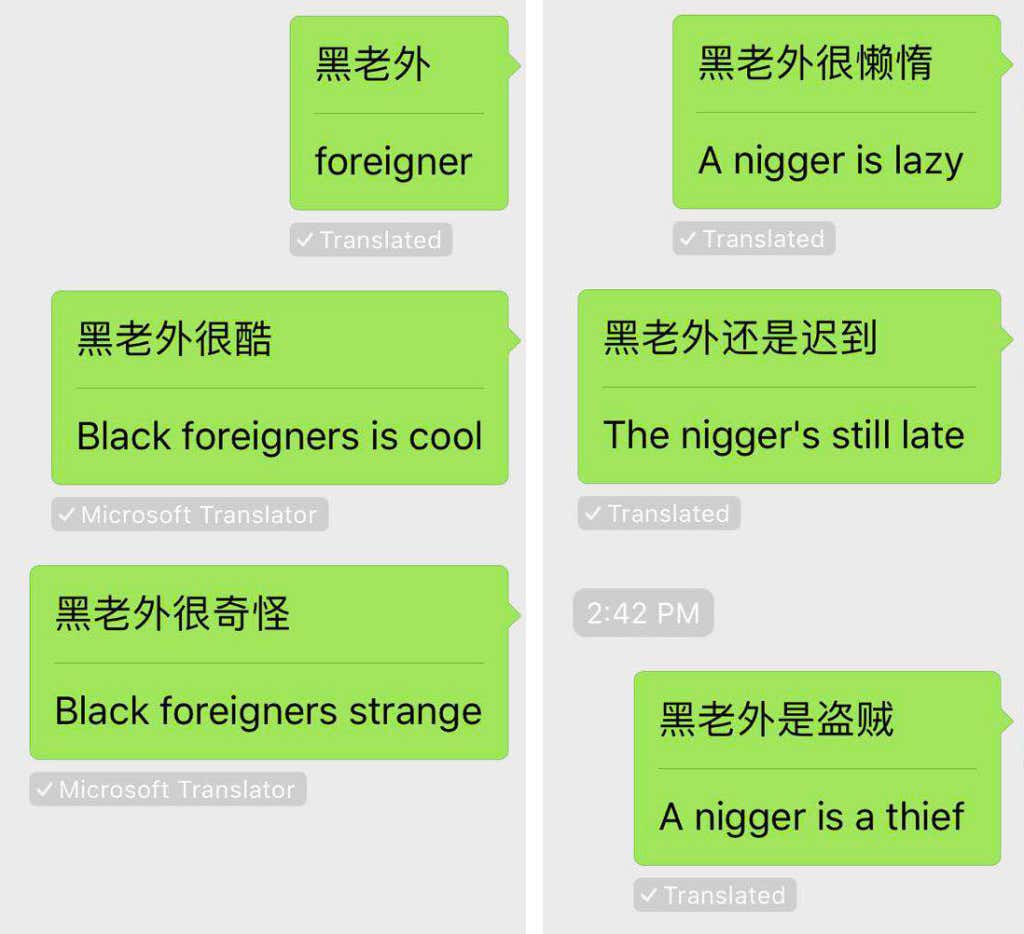 Jesus Mother and Mary! Usually when Chinese does something racist they can brush it off as harmless ignorance. Like “Oh I’m sorry we don’t have many minorities in China so aren’t always aware of what things certain people may find offensive.” I mean that was their excuse for this wildly racist detergent ad.

However, this WeChat glitch isn’t low-key racist. I mean maybe in the sense that it was able to fly under the radar for so long without people noticing but any other way you look at it this is some SUPER HIGH KEY WHITE HOOD type racist shit

Yesterday, after this story broke, WeChat apologized for their racist translation algorithm and issued the following statement:

The spokesperson for WeChat went on to explain that the app used neural machine translation, though the engine was constantly being refined to provide “more accurate, faithful, expressive, and elegant.” Now I know what you’re thinking, how dare WeChat try to blame this on their “neural machine” when this was clearly the act of a couple neo-nazi programmers they employ. But then I remembered, if the past five years have taught us anything about artificial intelligence it’s the the smarter robots get, the more racist they become. 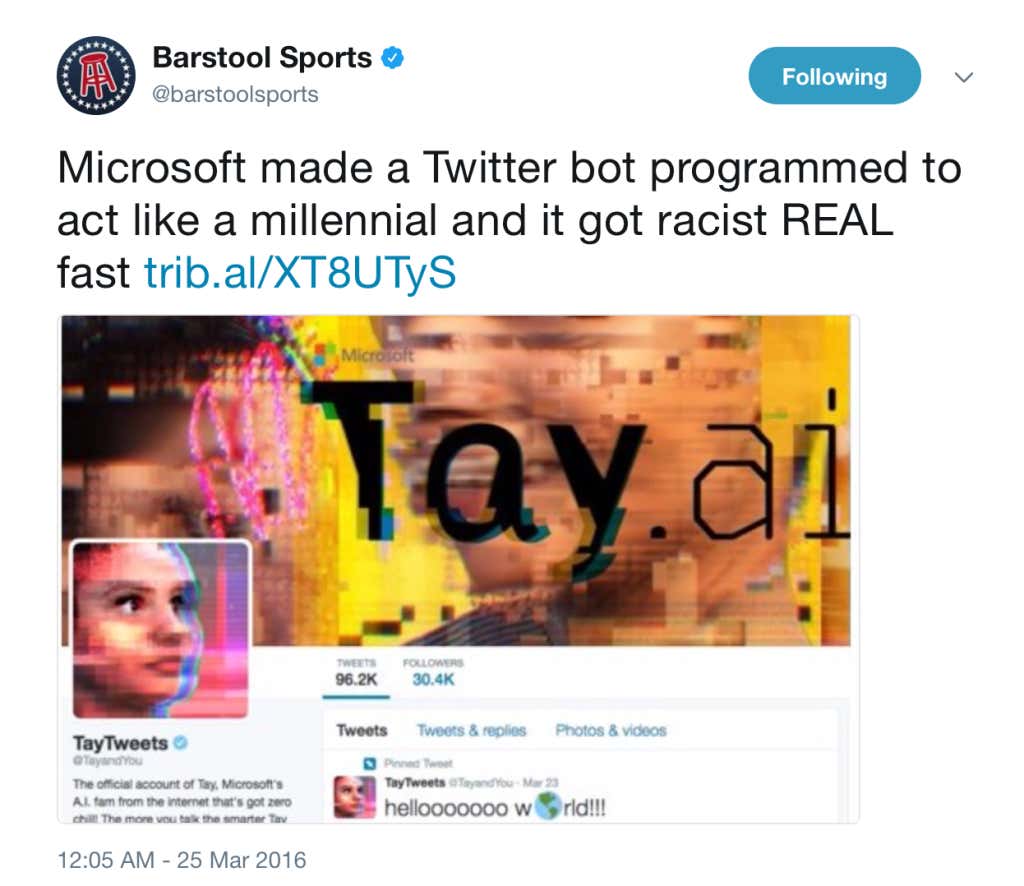 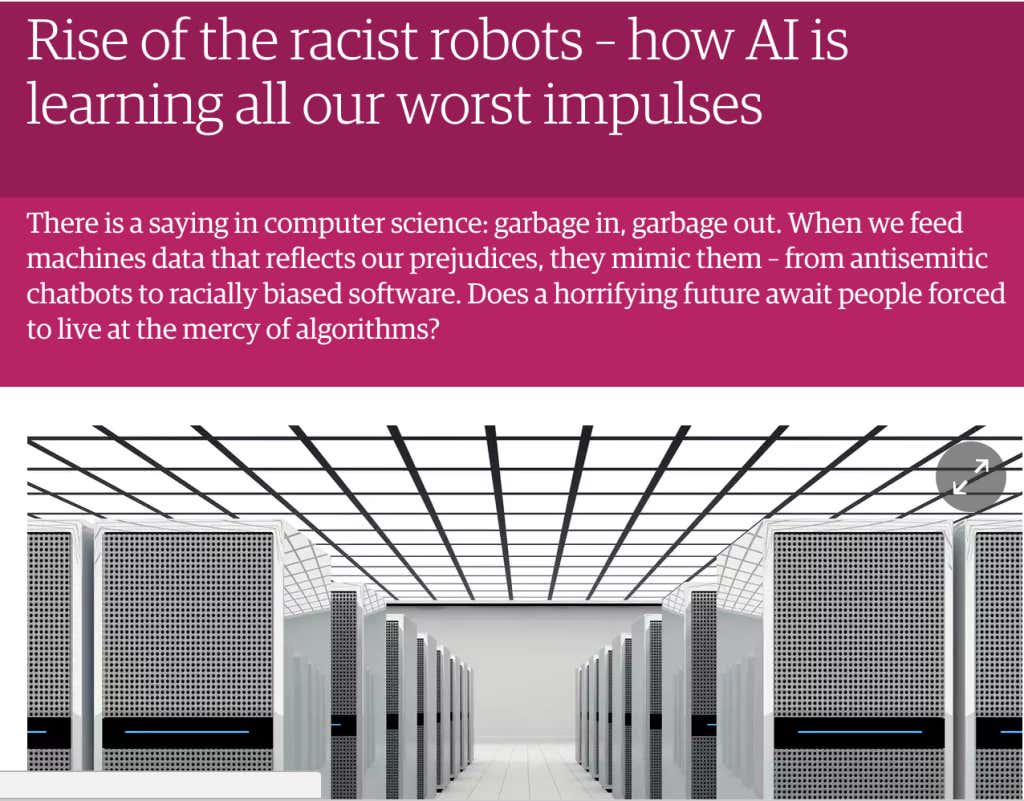 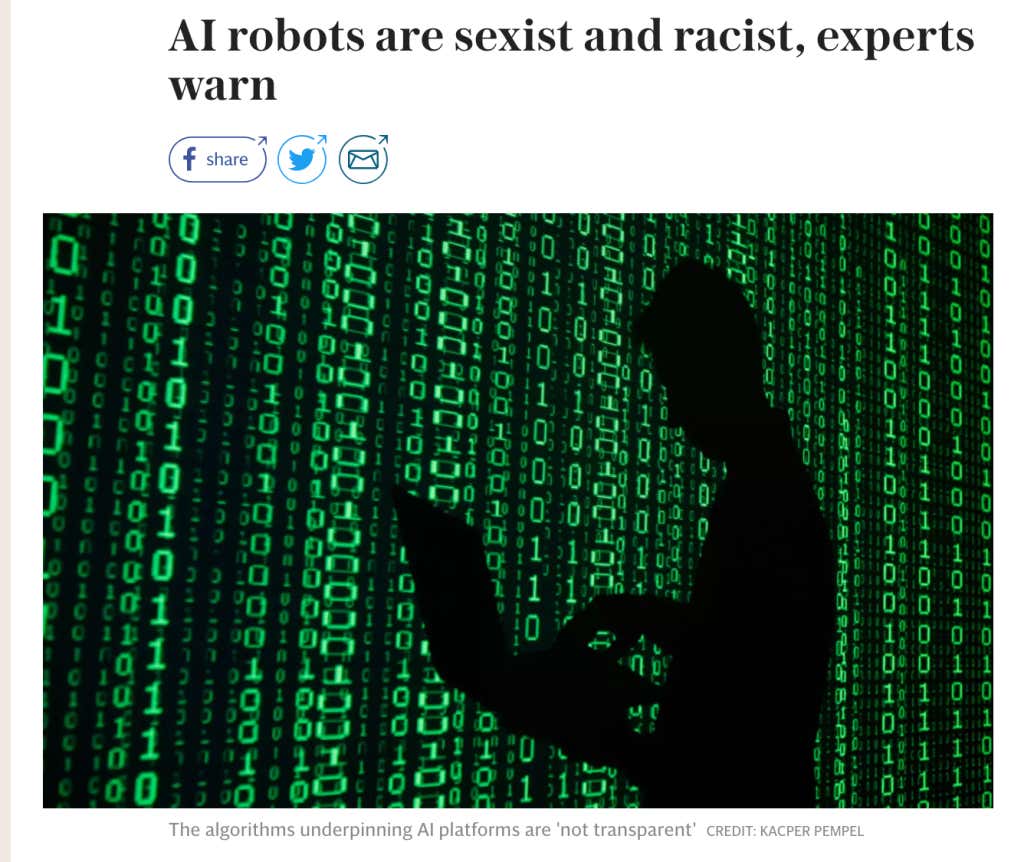 So if you think we live in a racially charged and divisive society now, take reassurance in the fact that when the robots inevitably take over in 10-100 years, they’re all gonna be gigantic internet trolls. WE. ARE. FUCKED.