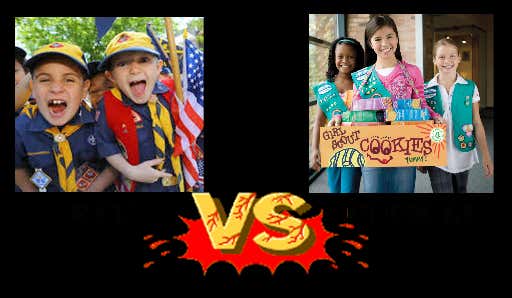 CNN- The Boy Scouts of America’s board of directors has unanimously agreed to welcome girls into the Cub Scout Program and to forge a path for older girls to pursue and earn the highest rank of Eagle Scout. “The historic decision comes after years of receiving requests from families and girls, the organization evaluated the results of numerous research efforts, gaining input from current members and leaders, as well as parents and girls who’ve never been involved in Scouting — to understand how to offer families an important additional choice in meeting the character development needs of all their children,” Boy Scouts of America said in a statement Wednesday.

Cub Scouts stand the fuck UP!!! The Girl Scouts are cut and it’s a bad cut. Today is truly a historic day in the ageless rivalry between Boy Scouts vs. Girl Scouts. As I said in my blog from a few months ago about the Girl Scouts being upset over whispers of the Boy Scouts secretly recruiting girls, whoever was able to open their doors to the opposite sex was going to cast a huuuuuuge lead in the race for scouting dollars. Yeah, dipping your toe into the opposite gender pool seems unfair. But the game is the game yo. I’m sure Branch Rickey backed Jackie Robinson because he thought the color barrier was bullshit. But he also knew that having a Hall of Fame second baseman would also help the Dodgers finally win a World Series. And that’s clearly what the Boy Scouts are doing here as well. They are playing for keeps while the Girl Scouts look to the refs for a bail out call that will never come. Anything goes in the year 2017, where those damn millennials kill any business model that seems archaic to the outside. And anyone with a brain realizes that a bunch of kids gathering together to do stuff that doesn’t involve staring at a screen is probably on the chopping block.

The Girl Scouts have had the advantage on the Boy Scouts ever since the first batch of Girl Scout cookies were taken out of the oven. But the gap has officially been closed now that there is an open door policy for the Cub Scouts. If you are a parent of a boy and a girl and you are deciding which scout your daughter is going to be in, you are choosing the Cub Scouts 100 times out of 100 so you don’t have to drop them off at different meetings at different places on different days. If the Girl Scouts want to promote segregation during this time of political strife, they might as well just dig a hole 6 feet deep and start dumping dirt on their busineess’ body right now. And for the people that say it is called Boy Scouts, well all you do is drop the Boy and call it Scouts. Once the Girl Scouts die because their membership plummeted, the Scouts group can give their members an option for being in all-boy scouts, all-girl scouts, or co-ed scouts groups. Boom, the Boy Scouts not only beat the Girl Scouts but the basically bought them for free. Pretty sure that’s right out of Sun Tzu’s Art of War (I don’t know if that’s actually true, but I know 2Pac talked about that all the time).