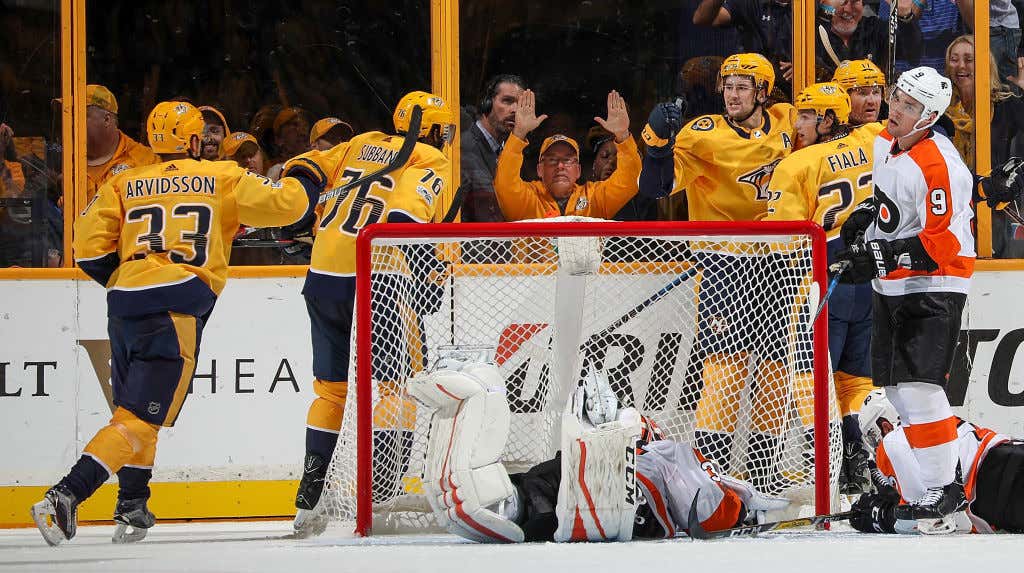 I didn’t want to write this blog last night. I was still way wayyyyy too heated about that game to put any thoughts into words. I was pissed at everybody on the roster and wanted to take the night to sleep on it and calm down a little bit. When I woke up this morning, I realized Dale Weise and Andrew MacDonald didn’t do anything wrong in the final 3 minutes of that game except for being on the receiving end of 2 egregious calls by the stripes in the final minutes of an intense game. The fact that the refs called not only one of these a penalty but BOTH OF THEM at the same fucking time with only 2:41 left in the 3rd period is outrageous.

Weise gets 2 minutes here for what? For running into a double team? The fuck is that nonsense?

And then Andrew MacDonald gets 2 minutes for a guy stepping on his stick? He wasn’t even poking and he gets called for a trip here. This just goes to show the officiating crew in Nashville last night was way out of their league. They couldn’t handle the situation. Anybody who is worth a damn swallows the whistle in these scenarios. Last 3 minutes of a crazy back-and-forth game, you let the players on the ice finish it off without trying to control the end yourself. So the Flyers now head to a 5v3 penalty kill with just 2:41 left in the game only up 1 goal. Nashville pulls their goalie and obviously they are going to score on the 6v3 to tie the game up. But like I said. I’m not mad at Dale Weise or Andrew MacDonald here. They got shafted by a couple of ticky tacky calls from stripes that were out of their league. Nothing you can really do about that. What happened next is the most blatant incompetence we’ve seen yet out of Dave Hakstol, and we’ve seen plenty of it so far.

In case you didn’t know, which it seems like Hakstol is somebody who didn’t, the new rule in the NHL this year is that failed coach’s challenges will result in a 2-minute penalty for your team. So you better damn well be sure that those mother fuckers were off before you challenge a goal. Here’s the zone entry before that Scott Hartnell goal to tie the game up at 5-5. 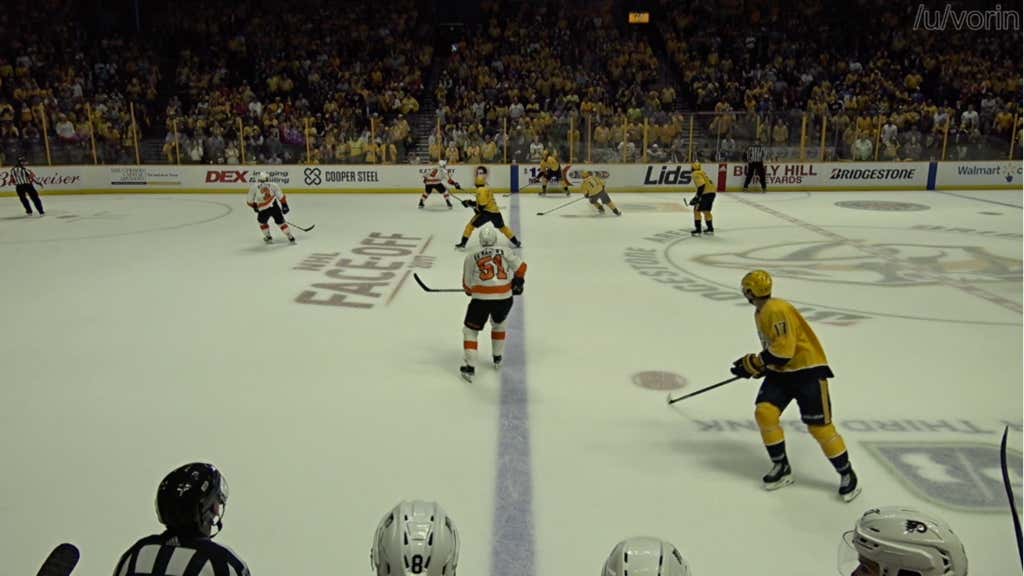 Does it look like maybe there is a slight chance that Filip Forsberg was in the zone before the puck? Sure, maybe. But does it look like he’s 100%, no questions about it offside? Absolutely not. Does it look like there’s at least 75% chance the call on the ice gets overturned with the evidence we see here? Absolutely not. This is a 50/50 call at best and that is being generous. So the risk is at least at 50% right now. Let’s weigh in the possible rewards. Here is the best case scenario–let’s just say that somehow this goal gets overturned. What happens then? Well the Predators are still on a 2-man advantage (3 if you’re counting the pulled goalie). The ice is already tilted and the most likely outcome is that they’ll just score again 30 seconds later.

God. Dammit. What Dave Hakstol did last night was steal a point from this team. The Flyers were down 3-0 to start the game. They battled back against a really good Nashville Predators team who is desperate to get their first win of the season on their home ice and they eventually take a 5-3 lead. Even with the Predators coming back to tie the game, they could have at least forced overtime and gotten a point out of the night. That would have been at least 5 points on a 4-game road trip to start the season. 2-1-1 at worst to start off the year in California for 3 straight games and then Nashville. I can live with 2-1-1. You take the points when you’re on the road. You realize the way the game is going, you let that Hartnell goal go and you just play for the overtime point. Instead, Dave Hakstol makes the worst decision that any NHL coach will make this year, gets burned by the offside review and the Flyers lose in regulation. They climb their way out of a 3-0 hole and for what? To prove that they can play with one of the better teams in the league? I guess that’s fine and everything but this team doesn’t have time for moral victories.

You. Take. The. Points. On. The. Road. Simple as that. Especially when it’s the last leg of a 4-game road trip.  And I know in the grand scheme of things it’s just 1 game. But the Metro Division is going to be a bloodbath this year and points actually count in the standings. Moral victories do not. Just wait and see how important 1-point in the standings becomes in late March/early April. The Flyers got robbed of that point by a couple of limp-dick refs and a shithead decision by Hakstol. You never want to root for somebody to lose their job and in that sense, I’m glad the Flyers aren’t actually going to fire Hakstol over this one. But the hot seat has a nice ass groove in it just for him right now.

P.S. – One day the Flyers are going to get themselves a legitimate goalie. One day. I can feel it.