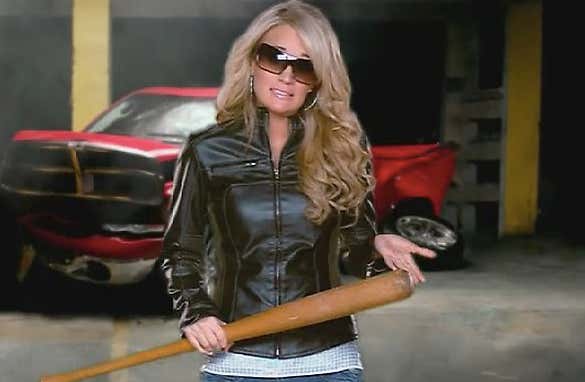 Source -  A woman trashed what she thought was her “cheating” boyfriend’s car in a drunken rage — only to discover it belonged to a total stranger.

Christine Ann Potten tore off the rear windscreen wiper and door trim and kicked off the driver’s mirror in a 1:00 a.m. wrecking spree. It was halted when a resident awakened by the commotion opened his window and shouted: “That’s not your boyfriend’s car.”

Potten, 38, staggered back home but left a trail of blood spots after cutting herself in the attack on the silver Peugeot 307. Police were called and she answered the door with her finger dripping with blood and told them: “I’m a naughty girl aren’t I?”

She was arrested and was ordered to pay $442 compensation to the car’s real owner Anita Meek after she admitted causing damage.

Yes Christine! Let’s set the scene to Carrie Underwood’s Before He Cheats. “Right now, he’s probably slow dancing with a bleached-blond-trap and she’s probably getting frisky!” *Rips windshield wiper.* Right now, he’s probably buying her some fruity little drank cuz she can’t shoot whiskey! *Bashes tail light.* “I dug those keys into the side of his pretty little souped-up-four-wheel drive, carved my name into his leather seat-” **Record scratch, thirty-eight year old Anita Meek emerges from her house to find crazed lunatic, Christen Potten destroying her car. “Um- that’s not your boyfriend’s car.” Christine flees on foot and the police are called.They show up to what they think is a domestic. Find nothing but a ripped windshield wiper, confused car owner, and a trail of blood. They follow it to a house where they find Christine Ann Potten. A portly woman so blacked out she thinks the real police are the male strippers she ordered six years ago. She answers the door with “I’m a naughty girl aren’t I?” only to get thrown in the drunk tank.

What a wild story. Carrie would be proud, she lived out her lyrics to a tee. Except for the fact that it wasn’t actually her cheating boyfriend’s car. Minor details.

Take it away, Carrie!