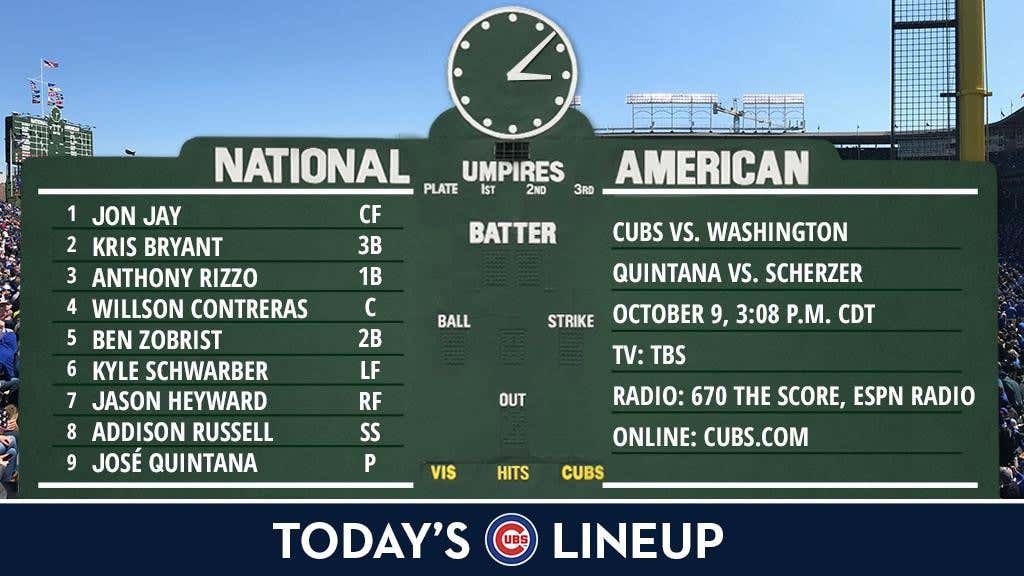 Author’s Note: I will be updating this repeatedly before and during the game to cover everything that I think is relevant to Game 3.

PREGAME: I don’t like the fact that the Cubs lost on Saturday night. Not one bit. Gun to my head I’d prefer to be up 2-0 than tied at 1-1 but HEY THAT’S JUST ME. I don’t work in professional baseball. I just write about it sometimes on a recovering smut blog turned world superpower news site. In other words, I don’t get paid to make decisions for the Cubs. That job belongs to Joe Maddon.

So let’s talk about it for a second while we wait, endlessly, for Game 3 to start.

As we know, CJ did not retire Adam Lind. He reached on a single and then Trea Turner struckout. The Cubs were up 3-1 with literally one of MLB’s best relievers sitting in the bullpen in his jacket chewing sunflower seeds. Davis should have been the one to go through Bryce, Rendon, Murphy and Zimmerman.

Think about it: do you want your best pitcher against their best hitters in their last AB of the game? Or is he better served against their bottom half of the lineup just because it’s the 9th inning and not the 8th? I don’t know.

What I know is that I want MY BEST vs. THEIR BEST, like for example when a 2-0 NLDS lead is on the line. Like work hard for me one time Joe and think outside the box. He could have gone to Wade after the Harper bomb too because, arguably, the next two outs were significant to get back in the dugout 3-3. Could we have used Wade then?

It doesn’t matter folks because we know how it all ended up. Losses are going to happen but I want to make clear that the Wade Davis not pitching is the top of my list for game 2. Not CJ. Not Monty. Not Ryan Zimmerman’s routine flyball that got carried out on Air Force 1 to left. It’s about Wade Davis collecting dust.

We got a lot of baseball left in the tank. So let’s get to it.

PREGAME 2: I know I already posted the lineup but I’m doing it twice because I spent a fair amount of time complaining already. So here’s the lineup again and some of you are scratching your heads:

Why is Ben Zobrist still in this thing?

Where is Ian Happ?

All valid questions which can be answered as follows: Righties hit .136/.187/.237 against Scherzer. Lefties hit .215/.299/.392. So you have to go with as many lefties as possible. And realistically, we’re playing for 2-3 runs so you need to keep Russell and Heyward in the lineup for defensive purposes. It’s not ideal, but this is what you have to do against Scherzer. Ian Happ would get his lunch eaten. Javy would see nothing but plus-plus sliders on the outer 25% of the plate. We know how that goes. At least Zobrist is patient and smart enough to understand how Scherzer is trying to get him out. I think that’s the ultimate take away.

For now, just hope that Bryant and Rizzo stay hot. If the Cubs win this series, it will be because of them. We’ve already seen it in Games 1 and 2. It’s just a matter of repeating that success at home, and hoping we can get some momentum on Scherzer early. The Cubs have been in the drivers seat this entire series save for the last 5 outs. I am not scared at all.

PREGAME 3 (11:30):  I am going to the game (thanks Big Cat!) and will be texting in updates to Chief throughout the game. Send questions to me on twitter @barstoolcarl and I’ll post some of them here too.

PREGAME 4 (12:30): Zobrist vs. La Stella is coming up in the comment section already and for good reason. Why not play LaStella? He’s 3-6 career against Scherzer in as many plate appearances, and that’s tied for 9th most PA’s for TLS against any MLB pitcher. So it’s not a huge sample size to us, but relative to TLS himself he has to feel pretty comfortable with his body of work against Scherzer. There’s only 18 pitchers he has seen more in his 4 year career of 755 plate appearances.

In the same respect, Zobrist has 226 career plate appearances in October. Zobrist is .250/.317/.392 in those plate appearances. TLS has 11 where he has put up a .000/.000/.000 slash. In a 1-1 series against MLB’s best right handed pitcher, I have to imagine Zobrist’s experience is the final trump card. I agree that TLS is the better match-up against Scherzer on its face. But mix in the environment, circumstances and experience and you can understand why Maddon prefers Z. That said, TLS could and easily should be the first bat off the bench to face Scherzer with RISP. I also think TLS’s value there (which I compare relative to all available bench options across MLB) to be quite high.

Also, I can say comfortably that Ben Zobrist is not nervous, pressing, or mentally unstable in any respect about the fact that he’s about to be playing in a 1-1 Game 3 at home. He doesn’t care about the first two games of this season and he has officially moved on. That’s his character and make-up. I am a little soft on how bad he’s looked… and actually confused with some of his pitch selection (swinging at first pitch of first two at bats in game 1)… but I think if there’s one guy not named Rizzo or Bryant who can go have a 3 hit day against Scherzer, it’s Zobrist.

Finally, and based on what I saw in games 1 & 2, I think Javy would struggle big time against Scherzer. Javy on Scherzer is a matchup nightmare. I don’t want to get into it because that means negatively talking about Javy hours before a big game, but just trust that Scherzer is pretty much the worst pitcher Javy could face. He will likely be pinch hitting as soon as Scherzer comes out though. Hopefully that is in the earlier part of the game.

9th inning
Wade shuts the door and its time to party. Get loaded. Be happy. Enjoy the moment. The Cubs are in the driver seat. This is what it’s all about. The superstars were the superstars and now it’s time to reflect over a dozen beverages of your choice. Go nuts.