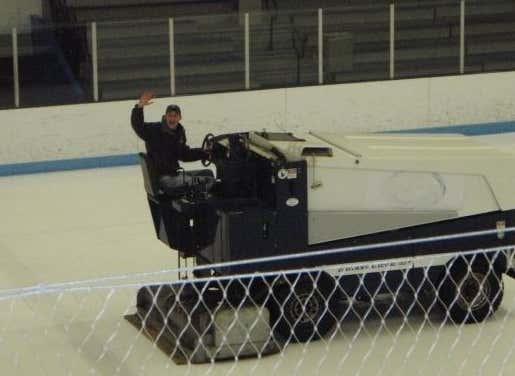 With hockey season underway I thought I’d shed some light on the unsung heroes of the rink. The visibly invisible. Without them pucks wouldn’t glide and lights wouldn’t turn on. They’re the first ones there and the last ones to leave. They’re the guys whose extra ice time turns next week’s loss into a win. They’re worker bees that keep the whole operation afloat, quietly circling the boards mesmerizing children and parents alike. I’m talking, of course, about Zamboni drivers. You may not typically notice them but hopefully after reading this article, you will.

As a former driver myself, I can appreciate the man behind the machine. A highly important yet massively under-appreciated cog in both the professional and local seasonal hockey wheels. That sentence made me laugh.  Having said that, I want to provide some insight into the life of a Zamboni driver as well as some do’s and don’ts to make dealing with your local driver easier.

Say thank you; manners matter. It’s not easy or enjoyable getting up at 4:30 in the morning and walking into a freezing cold, pitch black rink. Not only that, it’s scary. Don’t care how big you are, getting murdered will cross your mind. Especially when you turn the corner into the bay (Zamboni slang for garage). Also, keep your children under control. If little Tommy starts bitching about his bunchy socks shut him up.

Zamboni drivers are big on the one-hand-washes-the-other lifestyle. If you’re skating at night and want extra time, pay for it. Not the rink, that would be ridiculous, pay the driver. Think of it as a tip. I can’t tell you how many times the old men would slip me a twenty and a six-pack in exchange for a few more goals.  If you haven’t negotiated the terms of your time prior to hearing the buzzer, get off the ice or prepare to get run over.  I’ve sent many a child scrambling for their life because I came barreling onto the ice mid-drill.  And if for some reason you don’t want to pay for time, work something out with the next team’s coach. You can have an extra five minutes if he forfeits a fresh sheet.

Don’t critique the ice. Just like art, it’s subjective. To the skater it may be a mess but to the driver it may be a masterpiece. If it’s flooded, it’s been done out of necessity not disrespect. Although all bets are off when it comes to the crease. Unless the driver’s raising the blade two-and-a-quarter spins and shutting the wash water off you can expect a pond.

Don’t ask for an extra net, or bumpers, or pucks, or cones. Don’t get on the ice until the Zamboni’s off. We know how orgasmic it can be marking up a fresh sheet, just wait. It’s not worth the embarrassment of flying through the Zamboni doors. Besides, we don’t sharpen skates and the pro-shop is closed. Don’t spit on the floors. Don’t try to talk to us while we’re driving. No one wants “death by Zamboni” in their obituary. Unless you’re at a professional game, don’t clap. We can’t hear it anyway. Sitting on a Zamboni is like sitting inside a jet engine. Don’t smoke weed in the locker room. Drinking is fine as long as everyone’s over eighteen. I’m sure there are other do’s and don’ts, but you get the idea.

At any rate, ask any good Zamboni driver and they’ll tell you their “machine” is an extension of themselves. Like an Avatar and his horse. When the vertical auger clogs, so does his colon. When the blade is sharp so is his wit. When the ice is shining so is his face. It’s a skill few possess yet all should appreciate.

To this day, driving the Zamboni was one of the best jobs I’ve ever had. It was truck driving on ice with occasional human interaction. In other words, a third grader’s dream. Not only that, it had a clubhouse vibe that would rival HQ. Everyone always hanging around busting balls. Having a few cocktails (Bud-Lights).  I enjoyed (and suffered through) some of the biggest moments in Boston sports history at the rink. When the Pat’s lost to the Giants in 2007 I was at the rink. The place went nuts. A drunk skater told me I should drive the Zamboni through the boards in protest. I did not. I had another chance in 2012 but I don’t like to dwell on the past. Besides, we’re on to New York.

The rink is like a time capsule. When you’re there, you’re family…or maybe that’s The Olive Garden. So next time you’re watching a hockey game and you see a Zamboni driver creeping along the boards, give him a nod. He’s the one making it all happen.

Little known fact about Zamboni drivers- they can sing (3:25).