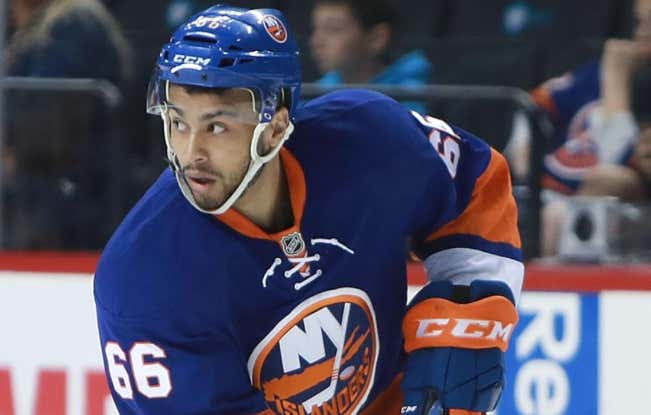 Well it’s that time of the year again my friends; another season of Islanders hockey where the positive takes are made up and the progression doesn’t matter.

After spending much of the offseason talking about this organization’s dealings off the ice, it’s finally time to start worrying about it’s dealings on the ice, because what’s a season of Islanders hockey without a dash of cynicism? As the team who just never, quite, seems to put it all together might have just put it all together, with a few minor holes that can bring down the whole ship.

Andrew Ladd’s Season –  Ladd has been a topic of argument since signing a 7-year, $38.5M contract prior to last season and is still yet to find himself in the good graces of the majority of fans. His rocky season last year can be chalked up to nagging injuries as well as not finding a suitable role within the top-6 until later in the year; finishing with 31 points, his lowest in a full season since he joined the league.

Heading into the year 100% healthy and with a definite roll as 2nd line LW will do Ladd some good as he looks to bounce back from what even he will tell you was season in which he underperformed. Look for Ladder to help carry a line with Barzal and Bailey.

The Kids Taking The Next Step – Players like JHS and Beauvillier will be looking to build off of what were standout, though not history making, first cracks in the league last year, while true freshman such as Ryan Pulock and Mat Barzal hope to show why they deserve to be in the league full-time.

Beau has shown signs that he can be a valued contributor in the middle-6 and will likely find a home on a line with Brock Nelson and JHS to start the year but did have his given hardships throughout his rookie season. He’s shown enough to warrant a roster spot, but not enough for said spot to be untouchable going forward. Keeping him and JHS together is the right move, despite how enticing a 2nd line of Ladd-Barzal-JHS sounds.

Ho-Sang, on the other hand, had a tremendous showing in camp this month and seems to be ready & able to continue turning heads with his speed & creativity. Something about Showsang just makes you want to root for the guy; people who don’t know him think he’s punk, people who do know he’s a kindhearted guy who just likes to have fun and put on a show. Placing Nelson in between the BeauSang tandem should turnout to be fruitful for all three. Let 66 reign on ‘em folk.

PulockSZN has finally arrived and boy has it been lackluster thus far. The name we’ve been waiting to hear get called has finally gotten a real shot to crack an NHL roster, and though everything that comes from the preseason should be taken with a grain of salt, Pulock’s first couple of games haven’t really lived up to the hype that’s been building these last few years. I expect him to find his place within the roster, as well as proving to be a force on the powerplay, but it might take the 22 year old some time. He is a defenseman after all.

As underwhelming as Pulock has been at times this preseason, Barzal has been the opposite. Arguably the Islanders biggest force coming out of camp, there is absolutely not reason to exclude Barzal from the conversation of the team’s best playmaker, even with JT on the roster. B-Zazzle looks to be ready for some real NHL minutes and has been clicking in each and every spot Dougie has placed him within the team’s forward core. If we’re talking about kids living up to their hype, Barzal should be at the front of the list this year.

Jordan Eberle Is A New York Islander – It only took Garth 9 seasons but JT finally has his elite winger in Jordan Eberle. Last year we saw a first line of Lee-Tavares-Bailey find minor success, now swapping Bails out for a perennial 50 point scorer should put that line at an all-time high in productivity. JT has not one, but two, real-life goal scorers on each wing; Lee down-low and Ebs everywhere else. I expect big things from this trio which means absolutely nothing can go wrong because this is the Islanders we’re talking about here, right?

Dougie’s First Full Year At Head Coach – The trend towards prosperity this team took upon Dougie replacing long-time head coach in Jack Capuano last January was something Isles fans have never seen. What he did with this roster in just half a season has fans extremely hopeful for what he can do with an even more skilled roster, his own extremely experienced coaching staff, and a full offseason to plan out this whole operation. Dougie is sitting pretty atop a team that can very easily put up numbers if managed properly, something the first time Head Coach has done well thus far.

JTs Whole Existence As An Islander – It’s always dope to see the Islanders making national headlines. It rarely happens and when it does it’s often not for the right reasons and oh hey there’s Bob Mckenzie on national television saying JTs camp have put off contract talks to focus on the season, awesome.

In what could very well be JTs last season as an Islander expect any and all storylines to lead back to one question; What the fuck is going to happen to the team’s cornerstone player and captain? With the bid for a new arena near Belmont filed, and what appears to be a young and potential-filled roster set to take the ice, the Islanders have the ball rolling in the right direction, but with Garth hanging on by a thread, the slightest slip could see JT heading for greener pastures and a fanbase losing everything.

Why They’ll Make The Playoffs

The LTE line of Lee-Tavares-Eberle connects in all situations, while support comes from the 2nd line finding their rhythm over time. A combination of Lee/Ladd, Tavares, Eberle, Barzal, Leddy/Pulock finally gives this team a powerplay they can count on while Greiss is able to take over the team’s sole starting ‘tender, with Halak acting as a formidable backup in his final year here.

Why They’ll Miss The Playoffs

Pulock and Barzal aren’t able to carry the weight their roles demand while Dougie mismanages the tandem goalie situation. Contract talks between JT fall to the wayside as he ends up getting moved at the deadline. New 1C in Brock Nelson can’t manage 1st line minutes while the picks Garth acquired for JT begin to gather dust.

All in all they’re an actually good team with what is arguably their best 1st line in decades. That’s not to say they are a cup favorite, but anywhere from a 4 to an 8 seed isn’t out of the question. The potential to have a well balanced and contributing middle-6 as well as an extremely good goalie tandem in Greiss/Halak is there but that is, of course, if everything goes according to plan, as nothing is guaranteed in life and the Islanders.

The team finishes around the 100 point mark and gets into the playoffs via the 6 seed, they make it out of the first round but fall short thereafter; JT re-signs for a kajillion billion dollars, I write this same season preview next year but with Ebs the player we need to re-sign and Bellows, Vande Sompel, & Sorokin as the kids we’re excited about.

Good luck and godspeed this year, let’s make it a good one.