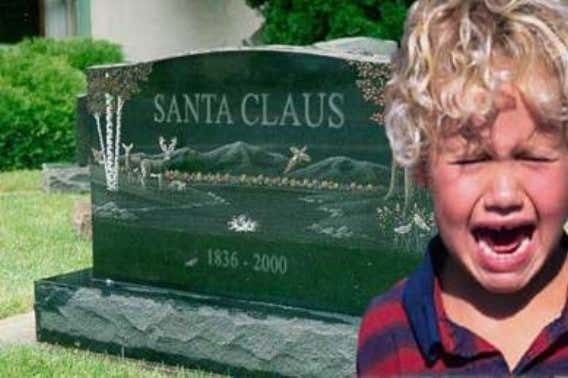 Telegraph – Archaeologists in Turkey have made a discovery which could settle a century-old debate … and disappoint millions of children around the world.

They have unearthed what they say is likely the tomb of the original Santa Claus, or Saint Nicholas, beneath an ancient church in Demre, southern Turkey.

Cemil Karabayram, the head of Antalya’s Monument Authority, said the shrine was discovered during electronic surveys that showed gaps beneath the church.

“We believe this shrine has not been damaged at all, but it is quite difficult to get to it as there are mosaics on the floor,” Mr Karabayram told the Turkish Hurriyet Daily News.
…

Previously, the remains were believed to have then been smuggled to the Italian city of Bari by merchants in the year 1087. … However, Turkish experts are now claiming the wrong bones were removed and those taken abroad belong to another, local priest, rather than the legendary bishop.

Sweet mother of god, Archaeology is a grim business. I mean, this is some real Indiana Jones and the Last Crusade shit. Busting through the tiles of old buildings to desecrate ancient graves. Smuggling the bones of old dead guys around like stolen jewelry. Only instead of defiling Sir Richard because he has the Grail map on his tomb, now it’s frigging Santa Claus.

Way to go, Cemil Karabayram. Nice job escalating the War on Christmas. It’s not enough Christian kids can’t do Christmas songs in public schools and everything is all “Happy Holidays” now so our holiest days don’t trigger anyone. Now you’re going to dig up Father Christmas and parade his rotting corpse through the streets just to sell t-shirts to tourists. And good luck to any Christian kid who hears about it because there aren’t enough grief counselors in the world to deal with the fallout.

My suggestion to anyone with young kids who catch wind of this is to tell them the Santa who’s grave got robbed is the one from Rudolph. He’s the biggest asshole in the history of Christmas. A slave master who abuses the help and degrades children with birth defects. They can do whatever they want to him.