After the cancellation of Week 3 due to a player’s strike, the NFL season resumes with replacement players. The NFL Players’ Association were fighting for the right to free agency. The replacement games were not well received by fans, as attendance plummeted, despite several star players including Joe Montana crossing the picket line to play for the San Francisco 49ers. The regular players would return after three weeks, as the players returned to work October 15th, without a new CBA.

Ever since the 1982 strike ended, the NFL Players’ Association now led by former Raiders lineman Gene Upshaw was looking to get the league to adopt free agency. The strike began following Week 2 once again as the New York Jets beat the New England Patriots 43-24 at the Meadowlands in the final game before the players walked off the job on September 21st. The strike caused the cancellation of Week 3, which hurt the Miami Dolphins more than any other team, as they were scheduled to play their first game at their new stadium against the reigning champion New York Giants. Not wanting to disrupt the season as much as the 1982 strike, the NFL Commissioner Pete Rozelle ordered the season to continue with replacement players in Week 4.

The replacement rosters were full of players who were cut in training camp and played in the USFL and CFL. Though cracks began forming in the union right away, as 15% of the NFL crossed the picket line to play with the scabs. Among the players who crossed the picket line were Howie Long of the Los Angeles Raiders, Tony Dorsett, and Randy White each from the Dallas Cowboys, Mark Gastineau of the New York Jets, Doug Flutie of the New England Patriots, Steve Largent of the Seattle Seahawks and Joe Montana of the San Francisco 49ers. Despite their presence, the fan reaction to the scab games was overwhelmingly negative as most games had less than 10,000 fans per game. Nowhere was the reaction worse than in Philadelphia where the Teamsters and fans joined the NFLPA on the picket line and drove around Veteran’s Stadium honking their horns, as less than 5,000 fans attended the Eagles game against the Chicago Bears.

With some teams having players cross the picket lines and other teams being made up completely of replacement players some of the games were incredibly lopsided. In a Monday Night Game in Week 4, the Super Bowl Champion Giants after starting the season with two tough losses to the Chicago Bears and Dallas Cowboys to open the season lost to the San Francisco 49ers 41-21. The Giants would lose all three games with replacement players and became the first reign champion to start the following season 0-5. The Giants would go on to finish in last place with a disappointing record of 6-9. 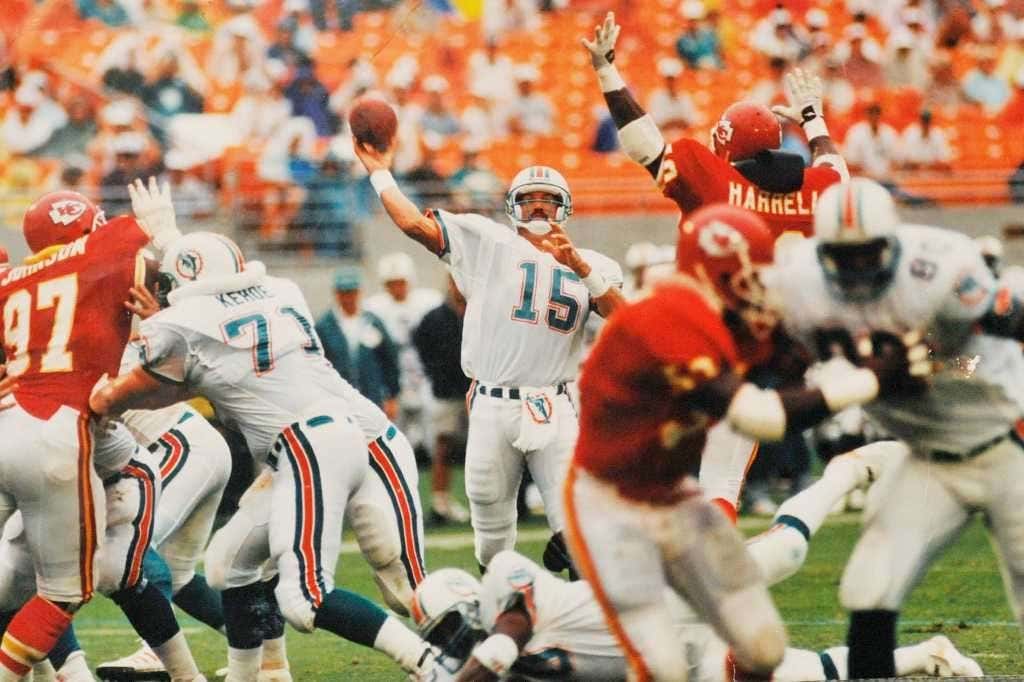 The replacement games continued in Week 5, as the Miami Dolphins finally opened Joe Robbie Stadium against the Kanas City Chiefs. Instead of Dan Marino throwing the first pass for Miami it was Kyle Mackey. The Dolphins would blank the Chiefs 42-0 with Rickey Isom scoring the first touchdown in the Dolphins new home. With more players crossing the picket line after each week, the Players’ Association surrendered and agreed to end their strike on October 15th.

Even though the players agreed to end their strike on October 15th, the NFL would continue using scabs in Week 6, as the truce was declared too late to have all the regulars in uniform. This set up one of the most dramatic moments of the replacement games, as the Washington Redskins who had no players cross the picket line faced the Dallas Cowboys, the team who had the most regulars in their lineup at Texas Stadium. The Redskins scabs would win the game 13-7 and helped provide a springboard to a second Super Bowl Championship, while the Cowboys finished with a losing record for the second straight year and began to look toward rebuilding. Despite their contribution, going 3-0, the Redskins replacement players never received a Super Bowl ring.

Among the notable players who appeared in replacement games, where former NCAA Coach Rick Neuheisel started at quarterback for the San Diego Chargers while current New Orleans Saints Coach Sean Payton, who won guided the team to a Super Bowl Championship, was under center for the Chicago Bears. Meanwhile, playing two replacement games for the Los Angeles Rams, was a Defensive End who played football at UNLV named Marion Knight. The defensive end, better known as Suge Knight would go on to become a world famous record producer.