Dan Bilzerian says he went to get a gun after seeing a girl get ‘shot in the head’ at Mandalay Bay Las Vegas shooting pic.twitter.com/EyiEWqlOdo

This is why children shouldn’t classify heroes by their followers or their photos. @danbilzerian this is what kills me about people like you. Always playing “operator dress up” and so so tough when the cameras are on. A woman just got shot in the head and you are running away filming that’s not what operators do. Please stop trying to be someone your not. People are dying, you’re running away not helping them and pretending it’s worthy of a video is disgusting. A post shared by Dakota Meyer (@dakotameyer0317) on Oct 2, 2017 at 5:12am PDT

Source – A Medal of Honor winner and Marine Corps veteran has slammed the ‘King of Instagram’ Dan Bilzerian for filming himself running away moments after he saw a woman shot in the dead in Las Vegas.

Professional poker player Bilzerian – who tried and failed to become a Navy SEAL – constantly posts photos of himself alongside his arsenal of weapons, working out topless, or surrounded by a bevvy of Instagram models.

But Afghanistan veteran Dakota Meyer, who is married to Sarah Palin’s daughter Bristol, says that when faced with real danger, Bilzerian simply ran away. …

‘A woman just got shot in the head and you are running away filming that’s not what operators do. Please stop trying to be someone your not. People are dying, you’re running away not helping them and pretending it’s worthy of a video is disgusting. …”

Meyer is a veteran of the United States Marine Corps and was awarded the Medal of Honor for his actions during the Battle of Ganjgal on September 8, 2009, in Afghanistan – becoming the second youngest, living Medal of Honor recipient.

There are certain things that are best said by certain people. If I rip into Dan Blizerian it would come off like I’m just another out of shape middle aged man (true), jealous of the fact his whole life is poker and boat parties with smokes (truer) who would have also fled the scene in terror (truest). Fortunately Dakota Meyer is none of those things. Dakota Meyer is this: 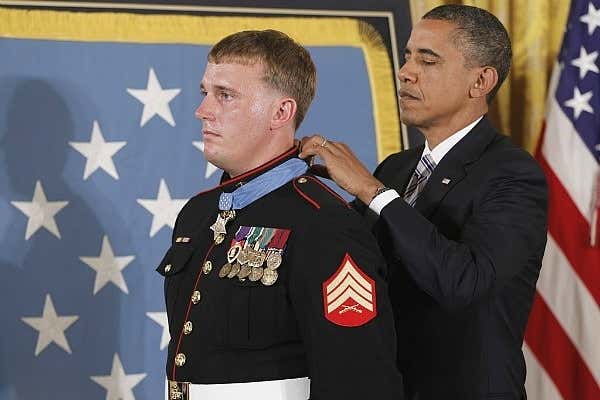 Rather than stay at a relatively safe distance from an intense fire-fight in which fellow Marines, US Army soldiers, and Afghan soldiers had been caught in an ambush – which he had been ordered to do – Meyer went time and again into the killing zone. During the six-hour battle, he evacuated 12 of those pinned down, provided cover for another 24 to withdraw to safety, and killed at least eight Taliban fighters in the process.

So while it’s objective true that it was a total scumbag move for Bilzerian to turn a victim being shot in the head as a chance to get social media clicks, you don’t have to take my word for it. Not when a genuine American hero with valor in the truest sense of the word that dozens of other brave men owe their lives to is saying it much better than anyone else could. These unfathomably horrible – and now common – situations bring out the best in some people and the worst in others. Thankfully the military and the first responders in Vegas have a lot of the former, and most of the latter are only on the Internet.