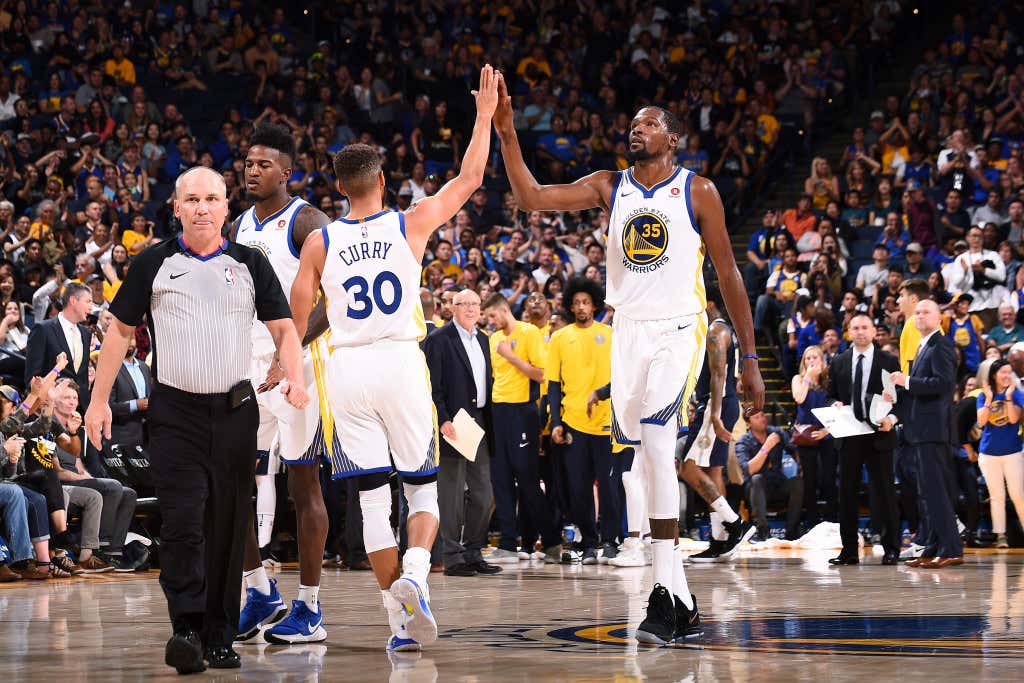 May I officially present to you, Last Night In The NBA. In an effort to give more love to all the beautiful basketball that is going to be played essentially every night for the next 8 months, each morning we’re going to have a quick run through of all the notable plays from the night before, even West Coast games that happen when we’re all supposed to be sleeping.

Last night basketball finally returned. Don’t really care that the games don’t mean anything, this was the closest we’ve had to legit NBA basketball in the last 110 days. We were blessed with two preseason matchups, Warriors vs Nuggets and Lakers vs Timberwolves (did you hear Lonzo was undefeated in scrimmages? Omg).

There’s no denying it, there’s clearly trouble already brewing in the Bay. I’m sure they thought per usual they could step out on the court and automatically be given a W, but not so fast. This is a new look Nuggets team, with a veteran All Star in Paul Milsap and a fully ready to break out Nikola Jokic.

Is this the year Emmanuel Mudiay finally figures it out? He did have 19/6 on 6-10 shooting, and did this

and Draymond got his DPOY trophy

To top it all off, they most definitely are going to end up turning Jordan Bell into the next Draymond and I’m sick about it already

The bigger surprises though were definitely Tak Gibson hitting two threes, and then Shabazz Muhammed going for 22 on 7-12. Pretty sure MIN didn’t even want to keep him in the first place, and he had the best night of anybody. Oh, and suck it Lonzo

Now for the Lakers, Kyle Kuzma continued to give us exactly what he did in Summer League which to be honest wasn’t all that bad.

He finished with 17/5 on 8-11 shooting, not too shabby for the 27th pick in his preseason debut. Julius Randle did his thing with 15/7 in what will be a big year for him because he needs to show other teams his worth since chances are the Lakers prefer the cap space over keeping him after this season. Finally, a -13 on the night, Lonzo finished with 5/7/8 on 2-9 shooting (1-5 from deep) with 3 TOs in a game high 35 minutes. Brandon Ingram didn’t really shoot it all that better, going 4-15. Add in 1-7 from Larry Nance and KCP, the Lakers starters were pretty terrible tbh. Nance did almost kill a guy though

We have MIA vs ATL and LAC vs TOR today to help deal with the conclusion of football, so sit back and enjoy your Sunday, good things are on the horizon.