Obviously this is one of those tough situations where you don’t know who to believe. In one corner, you have a Philly fan. I don’t know shit about this guy, but we all know the reputation of throwing batteries, booing Santa Claus, and just being blockheads in general.

In the other corner, we have Brandon Marshall, who has been dubbed The Black Cloud on this very website for his erratic, numbskull behavior. Granted Year 1 BMarsh is usually as well behaved as you are going to get. But since the Giants are 0-3 and Marshall has been a disappointment so far in blue, all bets are off about what type of BMarsh we are going to get. Regardless, this is a battle of sports tomfoolery titans unlike anything we have ever seen or will see again. It is the Pointing Spiderman meme brought to life. 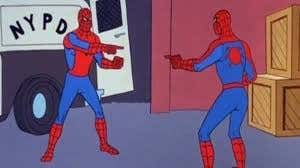 Now I’ve watched this video about 20 times with a completely unbiased eye. Sure I love my Giants about as much as I hate obnoxious Eagles fans. But that’s beside the point. The fact of the matter is I don’t see a loogie. Is there a chance that some spit shrapnel came out of BMarsh’s mouth? Of course. But that does not constitute a spit my friend. No court of law would uphold that it was a legit spit, from the Supreme Court all the way down to the now defunct court in the dregs of that dump Veteran’s Field. My thoughts are that this fan got into a shouting match with a player, saw a chance to take a dive while being recorded in the hopes of going viral, and here we are. Even the way this guy says “You just spit on me” seems fraudulent as fuck. This Philly fan is no different than that soccer coach that acted like his throat was karate chopped by Bruce Lee in his prime. Flop City.

And the capper to all this is that Brandon Marshall is friend of Trent.

You simply cannot be a friend of Trent if you are a bad guy. Trent’s inner cirlce is only for those with the purest hearts.

VERDICT: Brandon Marshall is NOT GUILTY of spitting on this random Eagles jamoke and the judge’s decision is final.

P.S. There is definitely a chance of a Second Spitter in this scenario and his name may or may not rhyme with Shmoshell Shmeckham Shunior.