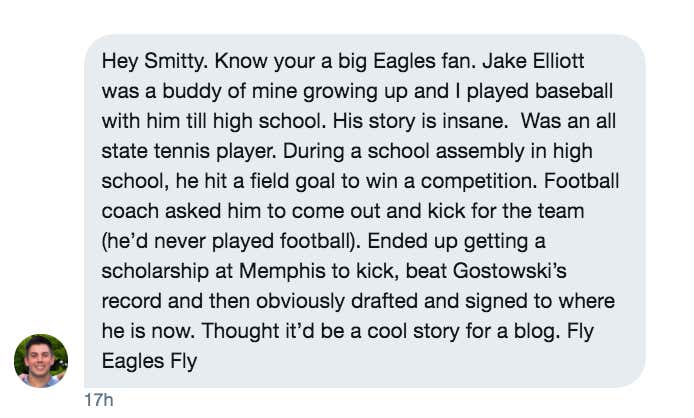 That little tidbit slid into my DM’s last night and has been making the media rounds this morning. What a way to spontaneously find your destiny. Like discovering plutonium by accident or falling backwards into a menage with two smoke roommates, Jake Elliott is one lucky bastard to have fate on his side during that random high school assembly. The longest FG ever made by a rookie kicker…with plenty of room to spare. Regardless, that kick was the ultimate win-win situation for Jake Elliott, who yanked a 52-yard FG attempt earlier. If he makes it, he’s a hero. If he squashes it, oh well. He’s not supposed to hit that kick. Now he’ll be revered by the Eagles fanbase forever. And by forever I of course mean until he misses his next kick and the savages immediately call for his head on a stake. You’re only as good as your last play in South Philly.

The only thing better than Jake’s story was his parents reaction to his historic boot. Awesome.

PS – The happiest lads/degenerates in all the land in the middle of enemy Giants fan territory. Pretty sure Louis is still convinced we lost the game.