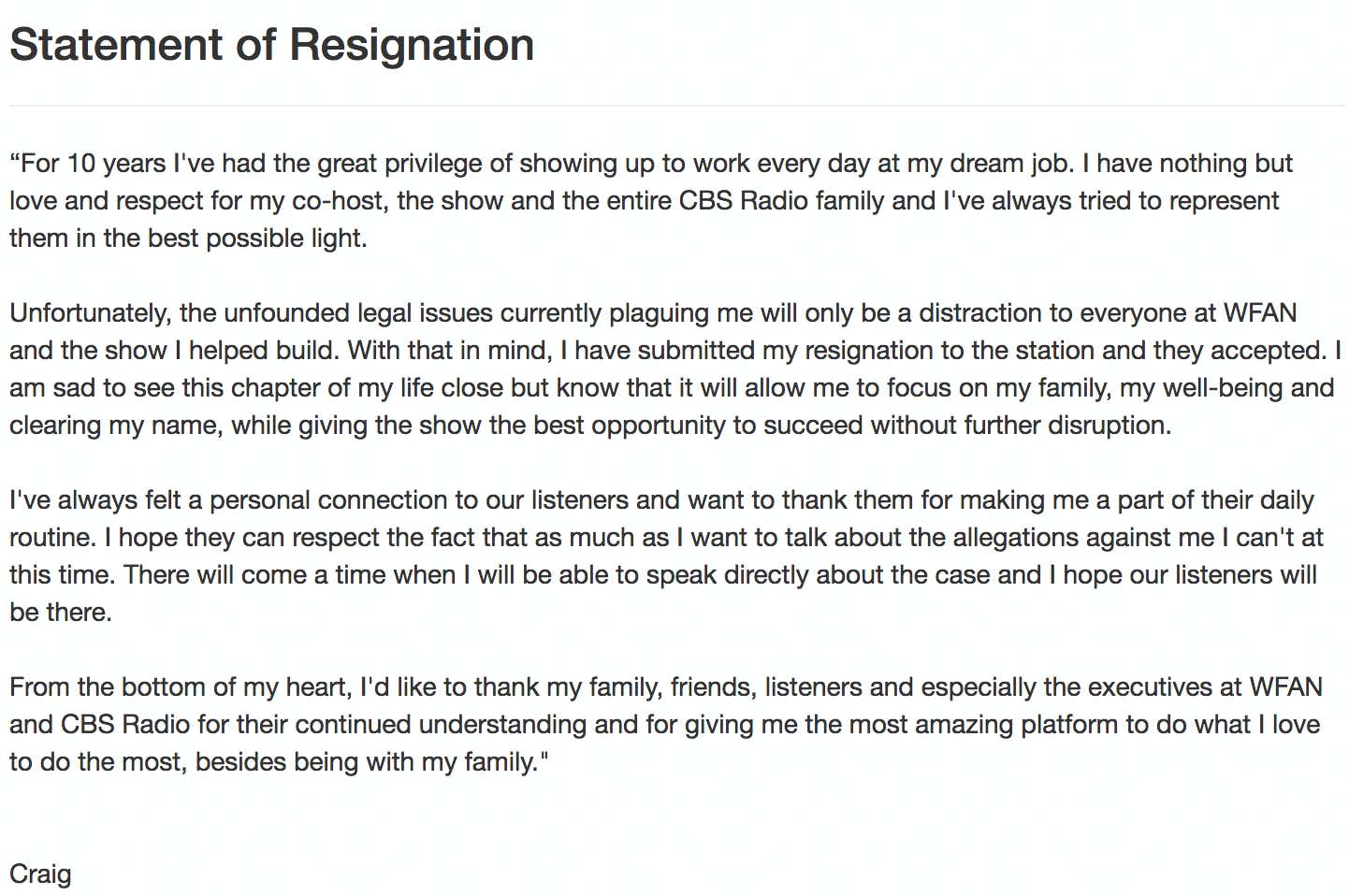 No surprise here. Unfortunately for Carton’s family, Craig’s status on the Boomer and Carton Show is the least of his worries. When you’re facing what looks like certain jail time, I think its a forgone conclusion you wont be carrying on your day job as usual. His statement of resignation was about as expected as it gets. Of course he’s gonna say he’s innocent and the facts will set him free etc etc blah blah. Nobody ever releases a statement like “Yup! I did it!” I’m sure there are still some details yet to come out, but I cant imagine any of them are good for Craig. The feds dont bust down the door at 5am unless they know they gotcha

Boomer addressing the situation in the manner he did wasnt surprising either. The Booms is a consummate professional and a loyal guy. And while I’m sure on some level, where he wont talk about it publicly, Boomer wants to just say “You fucking asshole you ruined a good thing!” I do think he genuinely wishes the best for Craig and his family.

So while this is all very predictable, its still jarring for any fans of the morning show. For 2 reasons – 1) WFAN erased any mention of Carton with the QUICKNESS. From the rebranded name “The Morning Show with Boomer” to any signage or pictures in the studio, Craig Carton’s likeness was wiped clean from WFAN overnight. Just like a snap of the fingers and arguably the most successful sports talk show in the world is gone forever. Which brings me to…

2) I feel HORRIBLE for the rest of the morning show. Particularly Al, Jerry and Eddie. Boomer will obviously be fine. It sucks for him as well but he’s got a million other jobs, lotsa money, and is deep into his career. Thats not exactly the case for Al Jerry and Eddie. Not like they are some rookies or anything like that, but they aint former NFL MVPs and TV personalities and what not. HOWEVER, they were all a MAJOR part of that show and it all came together to create a number 1 smash hit. Which is the luckiest and rarest thing in entertainment. You gotta be talented and funny and entertaining but then there’s an element of luck and serendipity to really make it to that next level. The whole morning show team came together perfectly and were blessed with that fortune. One in a million shot and now its ruined. They are all supremely talented and will absolutely continue on with successful radio careers but to make it 10 years and 1 day and then unexpectedly be thrown into turmoil BLOWS. Al Jerry Eddie if you’re reading this my intent is not to point out the obvious and highlight the shittiness of the situation. But rather to pay respect to what you all created and give you the credit that some of the behind the scenes guys dont always get. Al as a producer, third cohost, and WEIRDEST DUDE in the world…Jerry as a great update guy and playing that self deprecating punching bag role…Eddie as an absolute MASTER of the audio drops, music and sound effects guy (which truly, genuinely elevates the entertainment of that show) They all deserve unlimited props for creating what Craig unfortunate took away.

Best of luck to all of them professionally and personally. Like I said I think they’ll all be just fine. Whatever iteration of the Morning Show WFAN creates those guys will be right there making more radio magic. And best of luck to Carton’s family throughout this whole process too. What Carton did was scummy and low but I think it came from a place of desperation and that sucks for everyone around him. Hopefully anybody who is innocent makes it out of this saga as unscathed as possible.