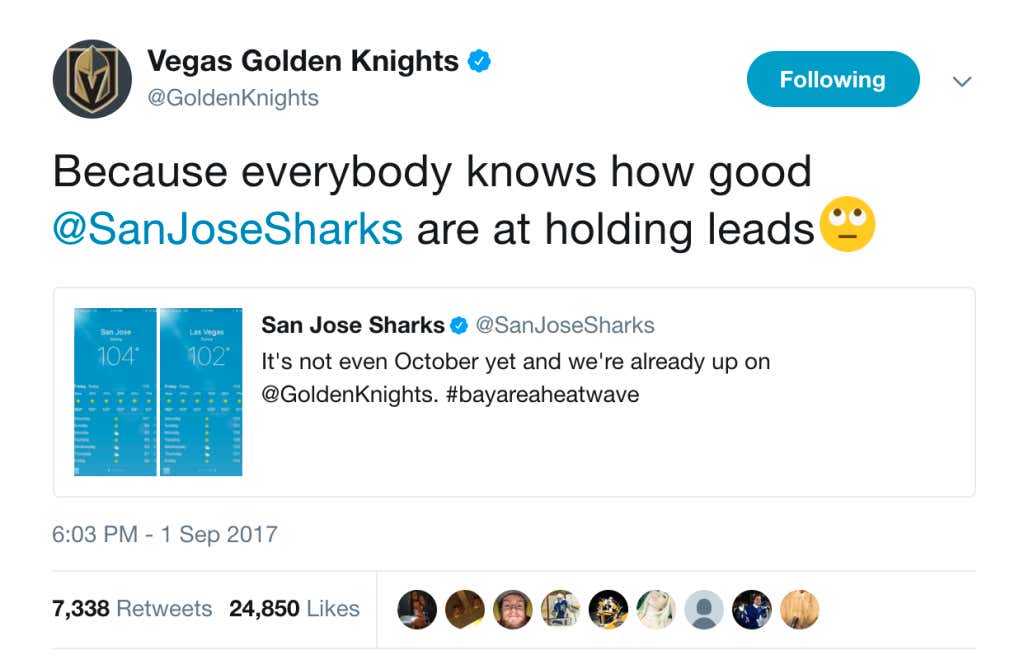 Lotta people this offseason been sucking the Golden Knights’ Twitter dick. Personally I’ve found it to be quite nauseating. Not the Twitter account. Just everybody losing their mind every time they respond to somebody talking about how it’s the greatest account of all time. Maybe subconsciously it’s a jealousy thing, I don’t know. With that being said, I’m starting to believe that whoever is running this account is a cold-blooded murderer. Exhibit A) The death of the Los Angeles Kings.

It starts with the Kings taking a quick shot at the Knights after a rookie tournament game last night. All in good fun. No harm, no foul.

I mean, they’re simply stating a fact. The Golden Knights have never won a game yet in franchise history. Therefore their win percentage is 0. Still seems a little unnecessary to call out the new kid on the block like that, for which the Golden Knights responded with this.

Out of the two, I say the Golden Knights end up looking the worst here. Saying you’re not big or important enough to warrant a chirp is never the best look. So the Kings could have just left it at that. Unfortunately, hubris got in the way here and they couldn’t just let this one die. Which led to this drastic mistake.

First of all, you should have just moved on. Second of all, if you’re going to respond then it can’t be with something this fucking lame. Wannabe? Way to bring the daggers out with that one. Really showed them. Totes roasted. Boston Market. But as the old adage goes, “if the King comes at the Golden Knight, he best not miss”. They missed. 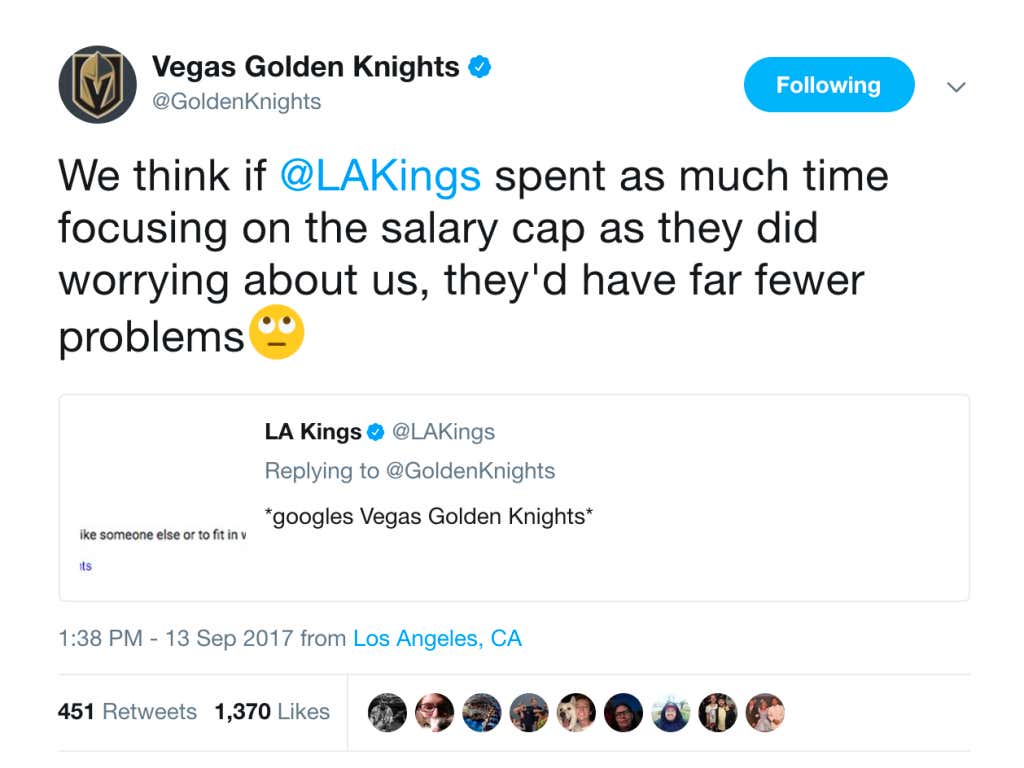 Right for the jugular.

Now I’ll be honest. I think the Golden Knights might be in over their head here. The Kings haven’t exactly dealt with the same salary cap issues as the Blackhawks. You take a look at their roster from the last time they won the Stanley Cup and their roster today, and most of the big names are still there. Drew Doughty, Anze Kopitar, Jeff Carter, Marian Gaborik, Dustin Brown, Jonathan Quick. Doughty is on a good deal. Kopitar is on a good deal. Carter is declining but it’s still not terrible. Really the only deal that looks like shit right now on their book is Dustin Brown. And they still have $6 million to play around with right now. But still, that’s a shot to the neck of the LA Kings. That’s how you take shit to a personal level. That’s how you generate bad blood between a team who has won 2 Cups in the last decade and an expansion team. And this Twitter murder couldn’t have happened to a better team.

Assuming whoever runs the Kings account probably has Jezebel set as their homepage.