Now if you remember, the Ducks were fresh off winning gold at the Junior Goodwill Games with Team USA. So they went from winning a major international tournament to playing JV High School hockey with the Eden Hall Warriors. That’s like sending the Penguins to go play a season in the ECHL. I’m not sure if books were even taking bets on Eden Hall JV vs the Blake Bears. Warriors -11.5 at Mayweather-like odds. And the boys got off to an extra hot start in the first 2 periods.

Conway scored so easily here it was almost like he was Bombay trying to score with Mrs. Conway.

The Cowboy with unlimited amounts of disrespect right here. Fulton fucking everybody up in the background (clear interference but whatever). It’s as if the Blake Bears didn’t even get off the bus that morning. The Warriors got up 9-0 after 2 periods leading Averman to these famous last words.

The Ducks thought they had this one wrapped up already. Thought they could just coast through the rest of the game and get out of there with the win. Thought they were on track to become the greatest JV hockey team the world has ever seen. Nothing but 10-0 blowouts on the horizon. But one by one, the Bears kept chipping back. Julie the Cat was worthless in net. They got undisciplined. And with 30 seconds to go, the Bears scored on the powerplay after an egregious Charlie Conway penalty to pull within 1. 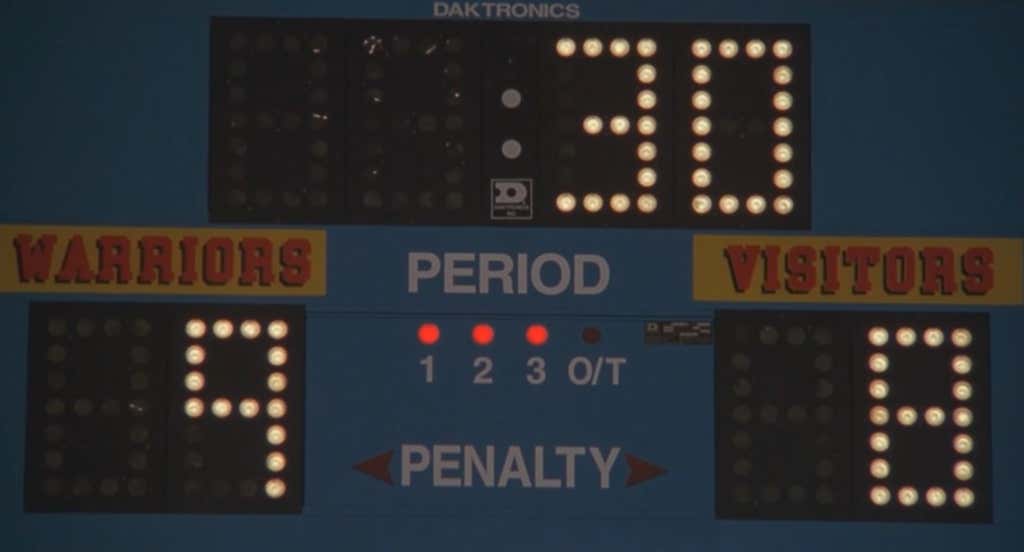 30-seconds left. They already let up 8 goals in the 3rd period. All they had to do was hold on for a final half minute and they’d still get out of there with the win. Regardless of being one of the worst meltdowns high school hockey has ever seen, it would still show up in the W column on their record. A win is a win is a win. Unfortunately, 30-seconds was just enough time for Rick Pitino to finish and for one of the most bone-headed plays in hockey history to go down.

Now here’s what we have to decide. The Warriors blew a 9-goal lead in the 3rd period. However, they still didn’t lose. They just ended up with a tie. Is tying better than blowing a 34-point lead and losing by 1? Maybe. But there’s more that goes into this than just a tie or a loss. You have to think about the teams and you have to think about the situation. Texas A&M was still coming into that game last night as the underdog. I don’t think anybody in the world saw the 1st half going that way. If you didn’t watch the game in it’s entirety and just saw the final score 45-44 UCLA, you’d think that Texas A&M played a great game. Meanwhile, the Warriors were supposed to smoke the Bears. It was supposed to be a 12-0 game. This was supposed to be stop 1 on their Tour of Destruction. But Conway was being a selfish little prick, wanted to rack up his points to impress that soon-to-be Puck Bunny in the stands and ended up blowing the whole thing. At the time, I think that’s more devastating. We all know how it turns out for Conway and the Ducks in the end. But this almost completely ruined Conway’s career for a while. Kid left the team and was on a downward spiral toward a life of depression and crack whores. Thank god Bombay was there to save the day.