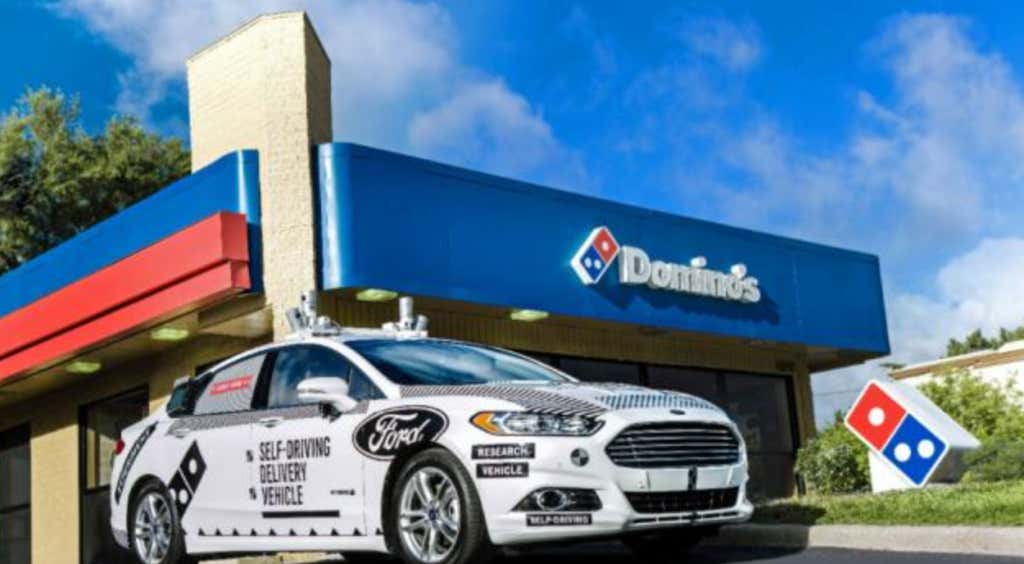 (Source) – Some Domino’s customers in Michigan may soon be getting their pizzas delivered by a self-driving car. Domino’s Pizza and Ford Motor Co. announced Tuesday that they are teaming up to test how consumers will react to having their orders delivered by an autonomous vehicle, as a number of companies explore how to integrate the emerging technology into their business models. Ford has promised to build a fully driverless car by 2021, while Domino’s hopes to someday replace all of its drivers with driverless cars.

Our boy Clem already blogged this but I’m sorry, his opinion was wrong so I couldn’t let that be the only Barstool take. I know Clem likes to say he’s bigger so his food opinion matters more, but he’s way off base here. Driverless deliveries are dumb as hell, no matter how much human interaction you can avoid.

However, I won’t rock with them on this little experiment. A delivery that just delivers to your house and not to your door? Well, that’s not a delivery at all. Unless there’s a robot in this car that’s gonna carry the box and ring my doorbell then I’ve got no use for this. If they don’t come up with a means to get the pizza from car to door then it’s the dumbest invention of all time because I’m not going out and putting in some code to get my pizza. I’m not going that on a beautiful summer day, let alone in the rain or snow.

I don’t order a pizza to walk to the street to get it, putting on pants and shoes was everything I was trying to avoid. Getting fresh air was the main obstacle I was avoiding when I bought a pizza and Kickers and Cheesy Bread and Lava Cakes via an app on my phone. Once I’m up off the couch I might as well walk to New Jersey for my food. Bringing the pizza to my apartment isn’t the delivery, bringing it to my door is. That’s without a doubt the most important part. Calling me and saying I need to go outside to complete the delivery is like giving me 90% of a blowjob and telling me to finish myself off the rest of the way, THAT’S THE PART I REALLY WANT YOU TO DO.

Get it together, Dominos. You’re a lovely establishment but I can’t continue to give you my patronage if you’re gonna start blue balling me with my pizza.