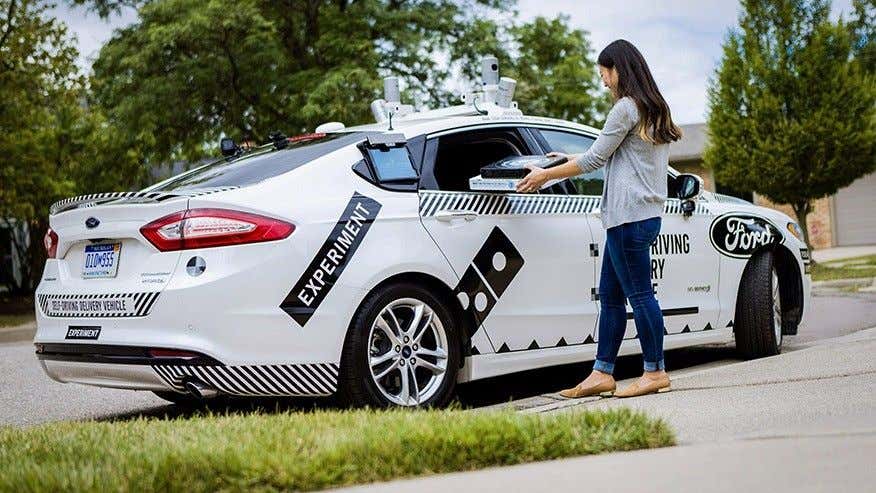 Bloomberg- Driverless pizza delivery will take a test spin of sorts in Ann Arbor, Michigan, as Domino’s Pizza Inc. and Ford Motor Co. team up to research reactions to robots bringing dinner to the driveway. But while the hot pies will arrive in an autonomous-capable Ford Fusion, there will still be a company engineer at the wheel, manually driving the car through the streets of the Midwestern city that’s home to the University of Michigan. The goal of the partnership is to examine how customers react to stepping out of their homes and walking to the car to fetch their pizza from a locked warming compartment, rather than having it carried to their doorstep.

“We’re interested to learn what people think about this type of delivery,” Russell Weiner, president of Domino’s USA, said in a statement. “The majority of our questions are about the last 50 feet of the delivery experience. For instance, how will customers react to coming outside to get their food?”

Usually when I see a story about self-driving cars, I am out immediately. It’s hard enough dodging yellow taxis in New York. I don’t need to worry about cars being driven by a microchip and Google Maps taking my slow ass out at an intersection. Plus Johnny Cab was creepy as fuuuuuck in Total Recall.

But I am all in on these Domino’s cars for one simple reason. I hate dealing with humans when ordering food. I hate talking to them on the phone. I hate making small talk when I answer the door. I hate having to say “Food’s here” even though nobody else is home so the delivery person doesn’t judge me for ordering all that food for myself. Being able to order online is like 70% of the reason I order Domino’s. I don’t have to talk to a soul and the Pizza Tracker is oddly mesmerizing. 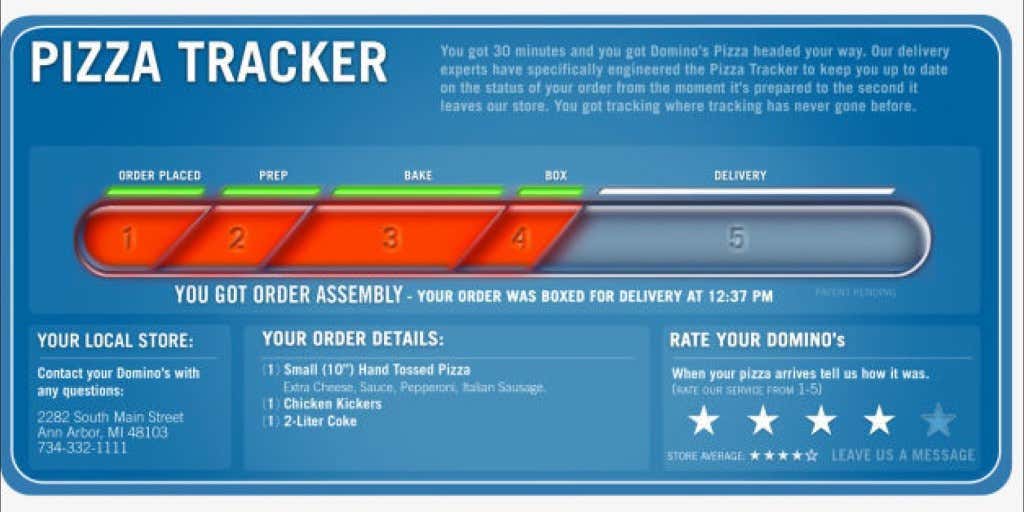 Learning the names of the people making my food while they make it gives me the oddest power trip.

Now I’m not here to bash Domino’s for their food. Yeah it doesn’t hold a candle to the pizza around me. But that’s fine. If I order Domino’s, I am not ordering it because I want pizza. I am ordering it because I want Domino’s, which means I want cheesy bread and lava cakes and I am craving that brand of “pizza” (notice the quotation marks). It’s like going to McDonald’s. I don’t go to Mickey D’s because I want hamburgers. I am going to the Mickey D’s because I want their fries and Sweet & Sour Sauce and Coke (like I’ve said a million times, McDonald’s Coke is the GOAT) and all that other shit that nobody on the planet does as well. I’m not getting good ass cheesy bread or Mickey D’s fries from actual restaurants.

And if you are going to self-drive a car that looks like it is from 2117, even better. Sure I don’t want to leave my house to get my delivered food, ESPECIALLY in a place where the weather sucks dick for about 50% of the year. But I can throw a hoodie and sweats on if all I am going to do is press a button on the iPad. Plus anyone that sees me outside is going to be too distracted by what appears to be Doc Brown’s car from the motherfucking future to notice that I look like a bum. The amount I care about having to go outside probably equals the amount I save in tips and shame when dealing with a real human. And while I would never order pizza to be delivered in a blizzard because I worry about the driver’s safety, you better believe I will order it if a self-driving car is delivering my food. A human life means something to me. A Ford Fusion’s life doesn’t mean shit to me (no offense to the Ford family or the assembly line, which was a game changer back in the day. Then again, so Barry Sanders and Calvin Johnson were game changers as well and they retired early on the team owned by the Fords. So yes offense to the Ford family but no offense to the assembly line).