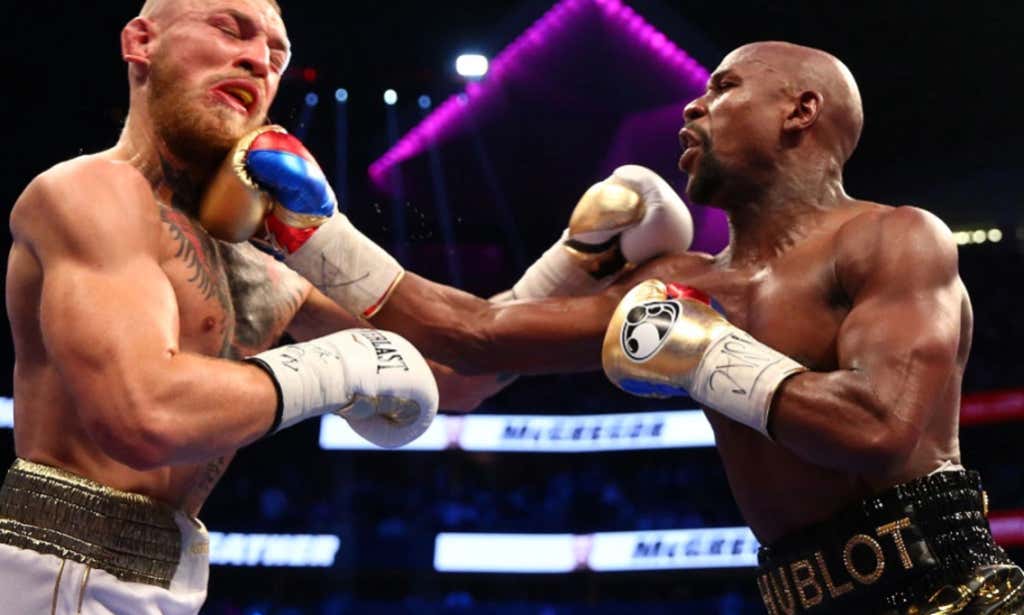 Last night, during the megafight between Floyd Mayweather and Conor McGregor, some fans viewing via pirate sources had additional information to digest at several points during the fight. Hardly visible during the action, what appeared to be some kind of code appeared on screen, raising suspicions that someone, somewhere, was trying to find out who was ‘stealing’ streams.

During the fight, TF received an unsubstantiated report that an unusual watermark was being embedded into streams originally broadcast by Sky Box Office in the UK. The message we received simply told us there were codes on the screen, but we were unable to get any further information from the source who had already gone offline.

Quick inquiries with two other sources watching pirate streams confirmed that codes had appeared on their screens too. One managed to take a series of photographs which are included below.

According to our sources, these codes didn’t appear when the main action was taking place but when the camera turned to people in each corner. Since no digits appeared over the top of the fight itself, it might suggest that they were put there by a broadcaster, in this instance Sky Box Office, who were licensed to show the fight in the UK.

If that was indeed the case, it’s certainly possible that the sequence of numbers would allow Sky to track the illicit stream back to a subscriber and/or a set-top box tied to a particular account. Since that subscriber has then re-streamed that content back online illegally, the code would act as a homing beacon and could spell bad news for the individual involved.

Sorry for the nerdiness of this blog, but it looks like people who created the illegal stream for the Mayweather McGregor fight could be in some deep shit after the code of the stream was flashed on the screen randomly. From what I gather here, people much smarter than me or you have the ability to track down the stream and trace it back to the original user. If they’re able to find the guy I’d imagine there will be a heavy lawsuit or jail time, but that’s not the point of this blog. This made me think how fucked we’d be as a society if we weren’t able to stream sports illegally online.

If you’re in your young 20’s like I am and you went away to college, odds are you or one of your friends had a hacked Kodi which made it possible to literally watch anything you want. No one pays for cable when you’re in college are you kidding? We’re all broke, spending every last dime we have at the bar on ourselves or girls we hope we can persuade to sleep with us. At the end of the night you wander home, smoke a bowl, and throw on whatever sports are still going on in the west coast and gamble on it. It was the best. Even while you’re pregaming to go out you throw on whatever Thursday night football was on or on Saturday the big college games throughout the day. Now that most of my friends have moved to the city, almost all of them have one of these bad boys and stream whatever they want. It’s the future.

It’s easier to do now, but flashing back to my high school days were a bit trickier. You went on First Row Sports or ATDHE.tv (or whatever it switched to at the time) and had to literally play Mission Impossible to click the right X’s and get to the actual video. If you clicked the wrong X you got no less than a billion popups. The rush you would get when you clicked the right X was like no other. Doing this during my accounting classes in 10th grade back in 2010 for March Madness or daytime baseball was unbelievable. My friend and I had an in with the teacher (she needed people to take her class otherwise it would cease it exist) so we never did any work in the class and got B’s for helping her out.  I’m not very good at much. I’m an average athlete, 5’9″ 155 lbs build, I have a funny tweet once in a blue moon, but if there’s one thing I trust myself in doing, it’s clicking the correct X’s in a reddit sports stream website to get to my sports stream. I was over at a buddy’s apartment this weekend for a gambling bonanza and my services were required. I mean were watching Hawaii vs. UMass football on the most ridiculous website possible and I’m out there avoiding pop-ups left and right like I’m Tom Cruise.

If you’re around my age and can’t relate to this blog then I’m sorry. You probably preferred to actually go outside as a teenager while I was trying to watch Arkansas State play UTEP in football diving into the deep web.