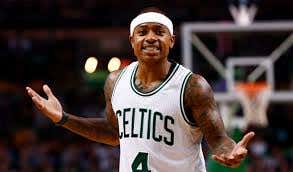 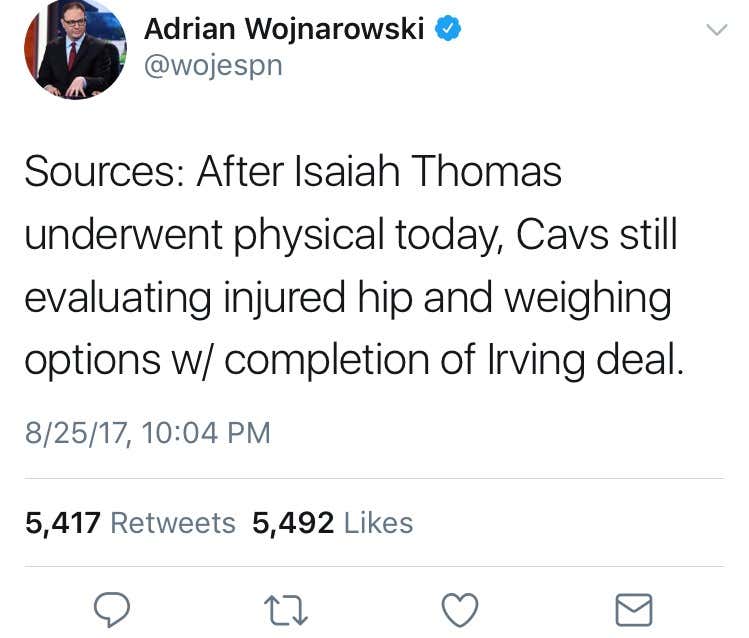 So here I was, in MN at my buddy’s wedding, waiting in line for some Michelob ultra golden light (apparently this is all MNers drink) when that above tweet came across my eyeballs.

Instantly, my heart started racing. But my brain had to step in and remind the rest of me that this is #actuallybad. For starters, let’s say the trade doesn’t go through and Jae, Isaiah, and Ante have to come back. As a team that relied heavily on chemistry, I don’t know how you come back from that. I mean #TeamIsaiah would be good, but for the actual basketball team, that is a level of destruction I want no part of. Sometimes when you burn a bridge you don’t get to pretend that it didn’t happen. That damage is real.

The other part is let’s say CLE comes back and demands more for this trade to go through. They can fuck right off with that. I would argue the Celtics already paid a pretty hefty in the first place, so if the Cavs come back and say they want Jaylen/Tatum, or even that Lakers pick, we can all agree that is completely  ridiculous right? I am not in favor of mortgaging our ENTIRE future for Kyrie Irving. You shouldn’t be either. What we gave was enough, period.

And then there’s the reality that if the Celts get Isaiah back, and his hip is this serious, he’s probably getting surgery which could mean he’s out for basically the entire year. Sure it would be interesting to see Smart/Rozier get more minutes, but it’s hard to say that is an ideal situation heading into a year already filled with high expectations.

Part of me has to think the Cavs knew the honest truth about the status of Isaiah’s hip and moved forward anyway. I mean since when do the Cavs care about the regular season? They could tell Isaiah to take 3 months off and be absolutely fine. I can’t imagine this was a situation where the Celtics were trying to give the Cavs a lemon and pray they didn’t find out.

When you think about it, both sides really need this trade to go through (as much as it hurts my heart). For the Cavs, they would be stuck back into the toxic and unhappy situation and more importantly be out a valuable building piece in the BKN pick. If this trade doesn’t go through wouldn’t you say #LebronWatch gets a little more interesting? For the Celtics, sure they get their pick back, but between the drama and an injured Isaiah, they are worse off as well.

Who knew a trade already filled with drama could get even crazier. What a clusterfuck.