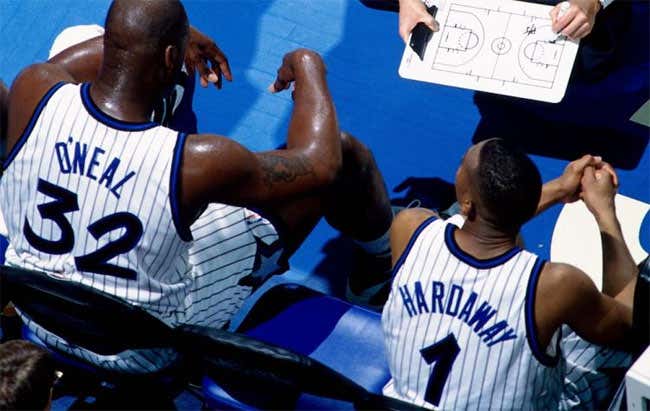 This stemmed from the release of the NBA2k all-time teams yesterday and the Blazers not having Brandon Roy on there. Apparently there’s a rights situation and that’s why he’s not in the game, but either way it started a conversation of some of the biggest what-ifs in the NBA. Brandon Roy was a really damn good player that we really only got to see for four seasons in the NBA. He was averaging 22 a game along with 5 assists, he was a rookie of the year, he was a 2-time All-NBA player. The guy was a legit star in the NBA before injuries took over. We’ve seen that happen quite a bit, especially with the Blazers, which cause people to wonder about what their careers could have been.

So with it being a Friday in the late summer (sup quarter zip season) it seems like a perfect time to ‘embrace debate.’ What are the biggest what-ifs in the NBA – the sport where I think we see this more than anywhere else. Now, these answers could be anything from what-if a trade happened, what if a coach leaves, what if this injury didn’t happen or anything on those lines. These are the most intriguing ones to me, which I think really could have impacted the NBA landscape. Tweet me yours @barstoolreags

This is probably one that most people would say because it could have meant the Bulls would have won 8 titles in a row. It would have played a direct role in how we view guys like Hakeem Olajuwon, Patrick Ewing and even Jordan himself. Plus, we wouldn’t have the best conspiracy theory out there that Jordan was suspended by David Stern due to his gambling and was forced to go play baseball. This also could have played a direct role into the next one:

What if Shaq and Penny stayed together in Orlando:

One of the teams to come out of the East when Jordan was playing baseball were the Orlando Magic led by Shaq and Penny. Maybe they don’t achieve the success right away due to Jordan’s Bulls and that leads to them staying together a little bit longer in Orlando. Could they have been the Los Angeles Lakers? Again, the entire landscape of the Eastern Conference would have been shifted. Those Nets teams of the early 2000s wouldn’t have made a few Finals in a row. Reggie Miller never makes a Final. The Pistons would have had legit competition during their two-year run. We would have been talking about the Magic as one of the best dynasties in the NBA. Speaking of Orlando:

What if Tim Duncan signed with the Magic:

There was a time in 2000 when Tim Duncan almost completely changed basketball. He was on the very cusp of signing with the Orlando Magic to create a superteam (I know, these things existed before present day) with Grant Hill and Tracy McGrady. Duncan admitted it was really close to happening but ultimately decided to come back to San Antonio instead. What’s important to note was this was in 2000, before restricted free agency was implemented in the new CBA, meaning the Spurs wouldn’t have been able to match the Magic. If Duncan would have left, the Lakers make a million Finals in a row likely facing the Magic in all of them. Gregg Popovich never turns into Pop. Manu and Tony Parker are probably role players at best and not a Hall of Famer like Manu is now. You could keep going and with the loaded 2003 Draft being not that far away, the lottery turning out differently as a direct result of this. Instead the Spurs are one of the three or four successful organizations in the league. Pop will go down as arguably the best coach in NBA history.

What if the Lakers trade for Chris Paul goes through:

Here’s another one that a lot of people like to bring up, especially since it’s one of the more recent ones. Stern absolutely Stern’d when he vetoed the Lakers trading Lamar Odom to the Hornets (now Pelicans), Pau Gasol to the Rockets with the Rockets trading Luis Scola, Kevin Martin and Goran Dragic to the Hornets while the Hornets trade CP3 to the Lakers. Leading the charge for the trade to be vetoed was Cleveland’s owner Dan Gilbert, who said that the Lakers would be saving $40 million, plus getting the best player in the trade without giving up any draft picks, would be simply unfair. Stern agreed. We all know what happened later when CP3 when to the Clippers for Eric Gordon, Chris Kaman, Al-Farouq Aminu and a 2012 unprotected pick (Austin Rivers). The other thing that happened with this trade was Doc Rivers ending up with the Clippers right after this. Even without the trade, it would have been intriguing to see the Clippers grow as they had a young core in Blake, DeAndre Jordan and Eric Bledsoe at the time. Not to mention they would have had the No. 10 pick in the upcoming draft. Luckily for the Hornets/Pelicans getting the worst of the two deals panned out as it led them to Anthony Davis. The Lakers trade would have made them good enough to not be the No. 1 overall pick, meaning they could have ended up with someone like Tyler Zeller instead. The Rockets core would have been Gasol/Courtney Lee/Goran Dragic and possibly a younger Nene. Would they have still gotten James Harden? Perhaps Dwight Howard excels with the Lakers because CP3 is one of the best pick-and-roll point guards in NBA history. Instead we know what happened there. As for Chris Paul, he would have likely won a title and this notion that he’s somehow overrated or not as good as people make him out to be because he hasn’t reached a conference championship would never be a thing. Everyone in the world would agree he’s a top-5 point guard of all time and silly debates would never happen.

What if the Thunder trade Serge Ibaka instead of James Harden:

Not sure if you know this, but our guy Tyler will remind you that the Thunder once had James Harden/Russell Westbrook/Kevin Durant on the same team. The Thunder had a bunch of ways out instead of trading James Harden to the Rockets. First, they could have traded Serge Ibaka. The fear was they were going to have to pay all four guys at some point and they valued what Ibaka brought at the time more than Harden. The other thing they could have done was amnesty Kendrick Perkins and his $8.5 million contract. The other thing is the Thunder could have looked at the new CBA and what was coming and done slight maneuvering to keep all four guys together, even with paying Harden his max. The Thunder become an absolute dynasty as these three/four grow together and they find the right role players off the bench. Would they be three MVPs? No. But they’d have a title.

What if Kobe is traded to Detroit:

A couple years ago Kobe confirmed that he squashed a deal that would have sent him to the Pistons in 2007. Kobe gave the Lakers a list of destinations he wanted to be traded to, Chicago was on there and at the top. Detroit was not on there. The trade would have been centered around Richard Hamilton, Tayshaun Prince and a ton of picks to get Kobe to Detroit. After Kobe said no, the Pistons traded Chauncey Billups to Denver for Allen Iverson. That likely doesn’t happen if Kobe is there. Would we look at Kobe differently for forcing a trade to Detroit? Would the Pistons have been good enough to beat Cleveland/Boston during that time with Kobe to make a couple more Finals? Staying with Detroit.

What if the Pistons don’t take Darko:

In terms of actual NBA Draft selections this is the biggest one – even bigger than Jordan because it at least made sense why the Blazers took Sam Bowie at the time. The problem here was Dumars didn’t do a ton of research. He admitted he did just about 20% of the research on Darko that he did later on in his career, which is how the Pistons missed terribly in one of the biggest drafts ever. They were dead set on taking Darko. They could have had Carmelo or Bosh. They could have had Wade too, but he wasn’t a great fit for the Pistons at the time, so we’ll toss him out. For the other two though? Carmelo would have been perfect in Detroit. The Pistons would have had a go-to scorer from the moment he was drafted and similar to CP3, the legacy of Melo is much different. Carmelo simply hasn’t played on good teams. We hear about his playoff failures all the time and the fact is he’s been an underdog in 80% of the series he’s played in. That wouldn’t have happened in Detroit. Both guys could have played the four spot and Melo could have slid to the three in lineups while Bosh could have moved to the five at times.

What if Arvydas Sabonis came to the NBA earlier:

It took 10 years for Arvydas Sabonis to come to the NBA. He was drafted No. 77 overall by the Atlanta Hawks in the 1985 draft, which was voided due to him being under 21. A year later, following an Achilles injury, the Blazers took him No. 24 overall, with plans of him attending and playing at LSU under Dale Brown. Sabonis was not allowed to play in the NBA however and continued to play for BC Zalgris. Sabonis was 31 by the time he finally joined the Blazers putting him past his prime, a prime that would have made him an MVP candidate in the NBA. He was that good. He was arguably the best big man in the world during the late 1980s and early 1990s. He changed the way bigs pass the ball as he was able to step out to the high post and deliver a pass or make one from the block. He’s still probably the best passing center we’ve seen. The Blazers would have had a core of Sabonis, Drexler, Cliff Robinson, Terry Porter and Buck Williams during the 1990s, making them the best team in the West most of the time.

Other ones that stick out due to injuries or whatever are the following:

What if Drazen Petrovic doesn’t die?

What if Len Bias doesn’t die?

What if Grant Hill stayed healthy?

What if Greg Oden stayed healthy?

What if the Timberwolves took Steph Curry instead of Ricky Rubio or Jonny Flynn?