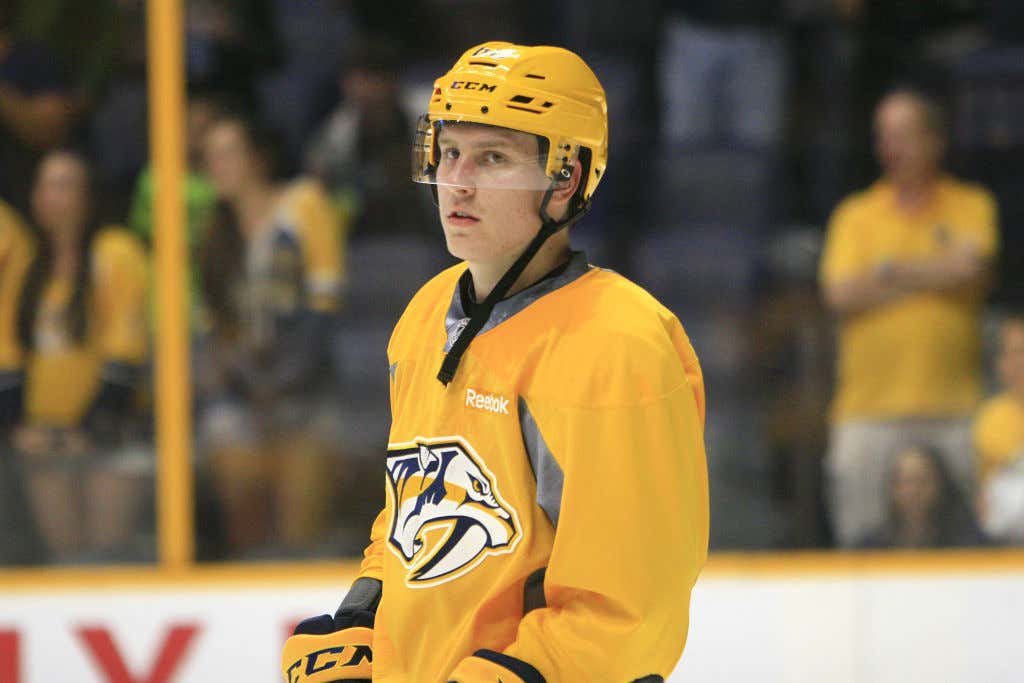 Eeli Tolvanen is a pretty curious case. He’s a part of the youth movement in Finland where they’ve been dominating the international tournaments over the last couple of years. He’s not quite at the Laine/Puljujarvi/Aho/Rantanen/Juolevi level. But he won a gold with Finland at the U18 Worlds and I’d say he’s right there at the 2nd tier of young stars their team has to build around for the next decade. Anyway, Tolvanen spent the last 2 seasons playing in the USHL where he was almost scoring a point per game as a 16 and 17 year old. He was a projected top 10-15 pick in the 2017 Draft but dropped all the way down to 30 for the Predators to pick up. The plan was going to be for Tolvanen to play at Boston College this season but got rejected from the school the night before the draft because of some sort of credit bullshit. I don’t know much about that but I do know that BC fucked up royally because instead of lighting up Hockey East this year, Tolvanen took his talents to the KHL and made his debut last night. Let’s see how that went for him.

3 goals in just over 8 minutes in the 3rd period. All of them absolute laser shows. Especially #3 on the night.

We all saw Patrik Laine walk into the NHL last year and murder goalies with his wrister. I know it’s just one game in the KHL but Eeli Tolvanen is looking like he’s just a left-handed version of Laine out there. That’s 3 straight rocket ships that Enroth never even saw before it was in the back of the net. Poor guy has been traveling around so much the last few years. From the Sabres to the Stars to the Kings to the Leafs to the AHL. He finally decides to sign in the KHL and this is what he has to deal with in his first game? Getting picked apart by an 18-year-old? Holy shit, bud. I feel awful for the guy.