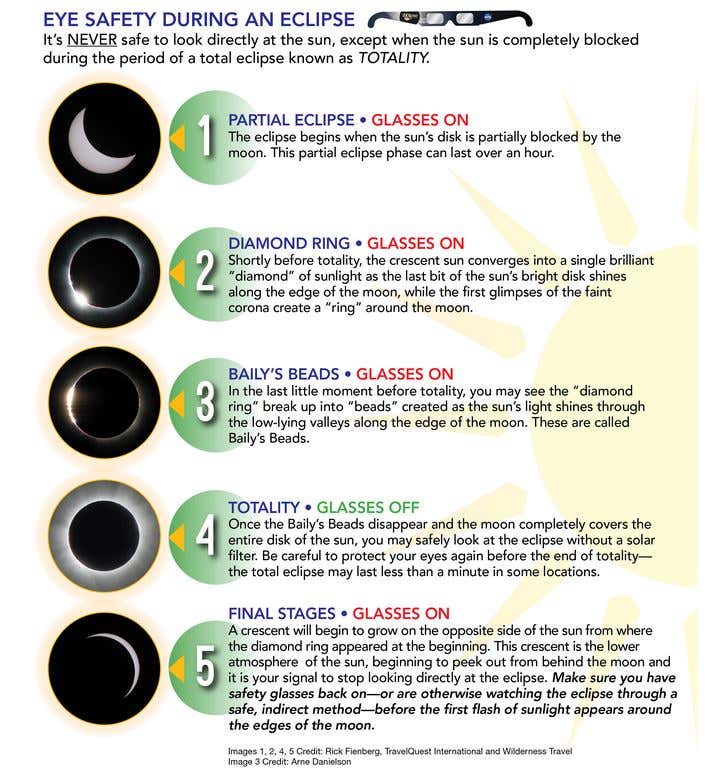 Yahoo – According to experts, viewing the sun with your naked eye during the eclipse can burn your retina, damaging the images your brain can view. This phenomenon, known as “eclipse blindness,” can cause temporary or permanent vision impairment, and in worst-case scenarios can lead to legal blindness, which entails significant loss of vision. “If people look without the proper protection [at the sun], they run the risk of injuring their eyes. And if they get an injury, depending on how often and how long they look at the sun without the protection, they do have a substantial risk of developing a permanent loss of vision,” said Dr. B. Ralph Chou, president of the Royal Astronomical Society of Canada and a former optometry professor. It is not possible to go completely blind from looking at the eclipse, Chou said, because the injury is limited to the central part of your visual field.

Let me start by clearing a couple things up. I am a huge solar eclipse guy. In fact I’m a huge astrology guy. I love me some good planets. Big Dipper, Little Dipper, North Star etc. That’s my jam. Like if I go on vacation and they have astrology viewing parties at night I’m all in. Shit is awesome. I did it with my parents in Sedona and it was so fucking cool to see all this shit through a mega telescope with somebody who knew what we were looking at. Sidenote my dad asked the astrology guy if the planet Saturn was named after the car. I still think it’s the dumbest thing Michael Portnoy esquire has ever said but I digress.

This blog isn’t to bash the Solar Eclipse. Yeah I kinda feel like this happens every 2 years not every 40 but whatever. Instead I wanna meet the guy who invented solar eclipse glasses. That dude makes Bernie Madoff look ethical. I mean how do you trick the entire population into thinking you need to wear those 3D eclipse glasses to look at the Eclipse? That if you don’t wear them than your eyes will burn off and your brain will melt or something. Is there any fucking evidence of this happening to anybody in the history of earth? No fucking way. I bet whoever came up with this theory is in cahoots with the Ebola and Swine Flu guys. Just creating mass panic over something that is so clearly fake. They’ve basically created a cottage industry over a fancy way to say “don’t look directly at the sun.” No shit homeboy. I didn’t need a solar eclipse expert to tell me that. Seriously I’d love to get the customer contact info for every fool who bought a pair of these glasses. That list is gold. Just sucker on top of sucker on top of sucker. I could sell a billion Ball Don’t Lie shirts to these morons. In fact if you see somebody wearing these tomorrow I give you permission to just mug them and take their wallet. They are basically begging to be robbed anyway.