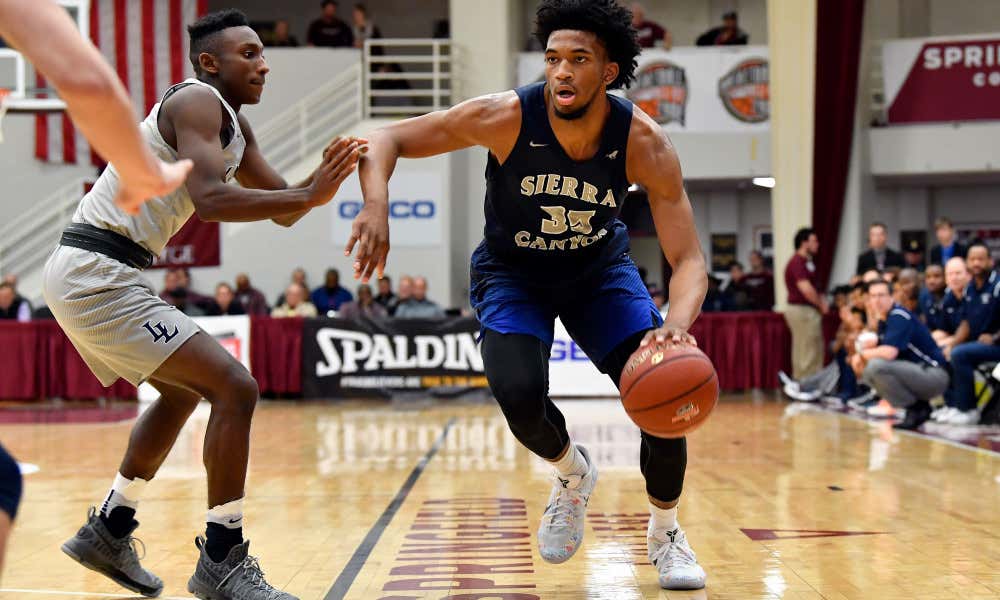 By now you’ve most likely heard Marvin Bagley has reclassified to the class of 2017 and committed to Duke. We’re still waiting for the NCAA to publicly say he’s clear to play, but the assumption is he’s fine based on the reclassification. I talked last night after he committed about the impact he will have when it comes directly to Duke and how he fits in their roster. I want to take a couple minutes and talk about how he impacts college basketball, but even more so how his reclassification completely impacts the NBA and the Draft.

From an NBA standpoint he’s the best prospect in this class now. What it really does though is add another tier 1 player to a loaded top portion of the draft. Right now the 2018 NBA Draft has more star power than the 2017, although I still like the depth of the 2017 Draft a little bit more. If you asked me today to list my top-10 without team need I’m going, in order,:

That’s a pretty good top-10 and a really damn good top-8. If you’re a Celtics fan and value assets, you should be thrilled. You’re likely walking away with two of the top guys, including possibly two potential No. 1 picks if you take the top-4. That’s going to be the thing to watch as the year unfolds. Do any of the top-4 separate themselves, as they are truly the guys who could be No. 1 picks. From there, what teams are taking and how do the trades start to play out i.e. Celtics trades with exceptions. Each of the top-4 do something a little different. Bagley and Porter are both stretch players, though Bagley is a better rebounder/finisher whereas Porter is the better shooter. Doncic is the slashing wing and Ayton is your more ‘traditional’ big compared to the others. That’s what’s going to make the 2018 Draft so interesting. Teams are going to start tanking and the lottery is going to be that important. There’s no reason for a handful of teams to even try and contend for the playoffs as we’ve seen if you don’t have a star you’re not winning in this league. Teams like the Hawks, Knicks, Magic, Bulls, etc should all be trying to get in the top-4 here.

Bagley is the type of prospect that is can’t miss. When you talk to guys who have been scouting for a long time, they consider him the best prospect since Anthony Davis and some would even go as far back as saying he’s the best high school prospect since LeBron James. To me, he has that type of hype. He’s a 6’11” lefty that can attack off the bounce, finish at the rim and while his shooting splits didn’t show it, he can shoot the ball. He has good form and when he’s playing at Duke, you should see the shot selection get better.

The thing to remember here too is even if Bagley gets denied by the NCAA – everything seems to be pointing this won’t happen as multiple people with great knowledge of the situation and family have been saying it’s unlikely to see the denial – is the NBA will have plenty of tape on Bagley. That’s the beauty of the EYBL and the development with the AAU circuit. Bagley is at his best when he’s attacking off the bounce and getting out in the open floor. He’s fantastic in transition – which fits the Duke system and likes to get the ball out in front of him.

From a college standpoint he’s already made Duke the clear favorites for the national title. They are now down to 3/1 in some places after being 7/1 yesterday, tied with Kentucky. He’s going to bump people from All-American teams in the preseason and while that’s not a huge thing, it plays a role in how players are perceived. It’s easier to say someone had a ‘let down’ season if they didn’t play to a preseason All-American hype or vice versa. Bagley is that good though. He’ll garner some NPOY votes and should be in the conversation with Bridges, Brunson and Trier for that.

What Bagley also does is solidify that we should never talk about Duke doing ‘things the right way’ ever again. They are a basketball factory. That’s not a knock. In fact it’s credit to K and his staff for adapting to the times. They couldn’t sit back and continue to recruit just four-year players. They need stars to keep up with teams around them and at a national stage. For all this talk about one-and-dones ruining college basketball – it’s not true and it’s also an NBA rule – it’s doing the opposite. It’s drawing intrigue. People were up watching SportsCenter and a LLWS doc waiting for this kid to announce his school. It’s time to start looking at Duke the same way we look at Kentucky though. They are a one-and-done factory who have shown that all that matters is getting the best talent. It’s cool to see a guy like K change like that. The question is when does everyone else follow?

If you’re an NBA fan, you should pay attention to the college game this year. Watch those top-8 guys (just seven college guys) above and see the type of talent heading into the 2018 NBA Draft. Bagley’s reclassification is significant because it brings more hype to the season and all eyes on Duke yet again. As for Duke, they will be my No. 1 team in the preseason poll, but there are questions. K needs some depth in the back court as it’s just Duval/Allen/Trent right now and he has three guys who are best fitted to play the five spot in college to fill out two spots in Bolden/Carter/Bagley. That said, the starting 5 of Duval/Allen/Trent/Bagley/Carter is so damn good.