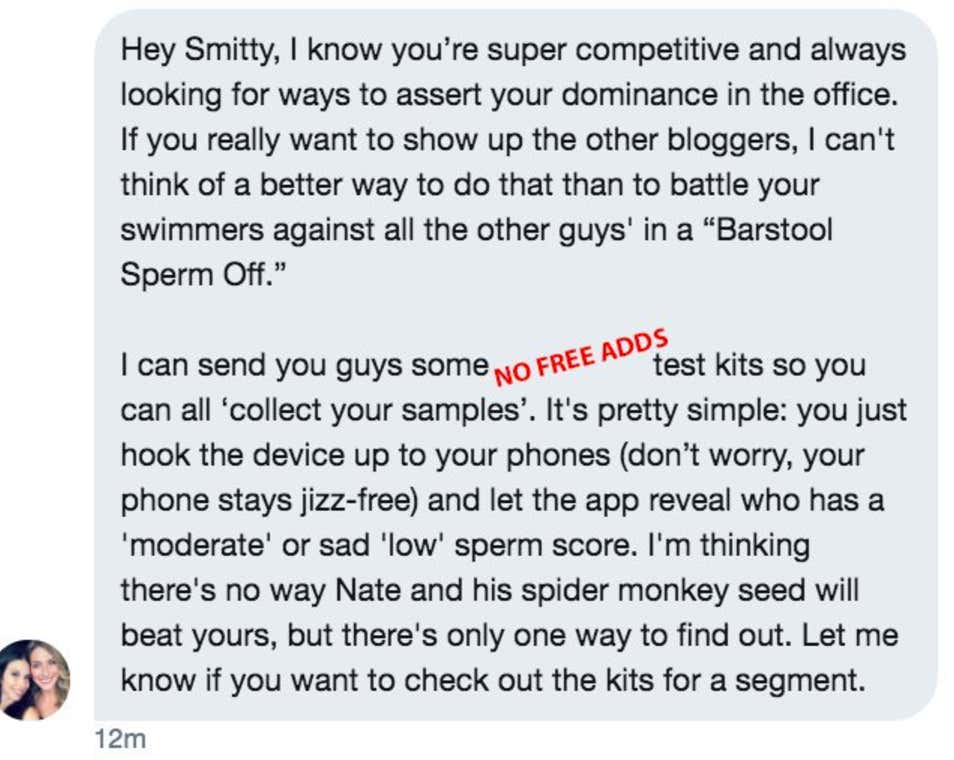 So this came through the ol’ Twitter DM machine yesterday. Interesting strategy for me to throw out there at the higher ups. So you’re saying we can publicly evaluate how fertile or infertile everyone is in the office? Now that’s a swell idea to pitch to the boss who (jokingly) gets ragged for shooting blanks. Maybe we can even Facebook Live a circle jerk right in front of the giant Menorah, too! I’m sure that will go over swimmingly! Pun fucking intended.

Thanks, but no thanks. Normally my mantra is that of Charles Barkley who once said “If you’d pay me enough I’d work for the Klan”. Not this time. Not by me. Ever. But kudos to her for thinking I’d spread the most seed. And I’d be flattered if it wasn’t categorically false.

True Story: Post degenerate days of poker where we’d do anything for a buck (which included getting interviewed for a Gay Porn video editor position, and then vehemently DENIED), I actually qualified on paper for sperm donation. Yes, I agree with what you’re thinking. I’m a blockheaded, borderline illiterate monstrosity that shouldn’t legally be allowed to breed for the good on mankind. However, on paper we don’t look that bad.  6’3, college “athlete” (D3 is still considered NCAA, somehow) and a diploma.  A perfect breeder for anyone lazy enough to not have a 2-minute conversation with me.  And no, I didn’t go through with it.  Not cause I didn’t want to have 500 kids hit me up in 20 years like Vince Vaughn in Delivery Man, but because I legitimately don’t think the boys can swim, and I was too scared to find out.  With the amount of time an overheated laptop has rested on my crotch, the inside of my balls resemble Chernobyl. That and I got absolute stage fright in the “delivery room” and made an absolute beeline for the exit.  Sad but true. But for real, these swimmers probably sink like a stone. A Waylan Smithers/KFC I am not.

PS – Potential Sperm Offs and Midget Deflection. A strong week of DM collateral for the kid.