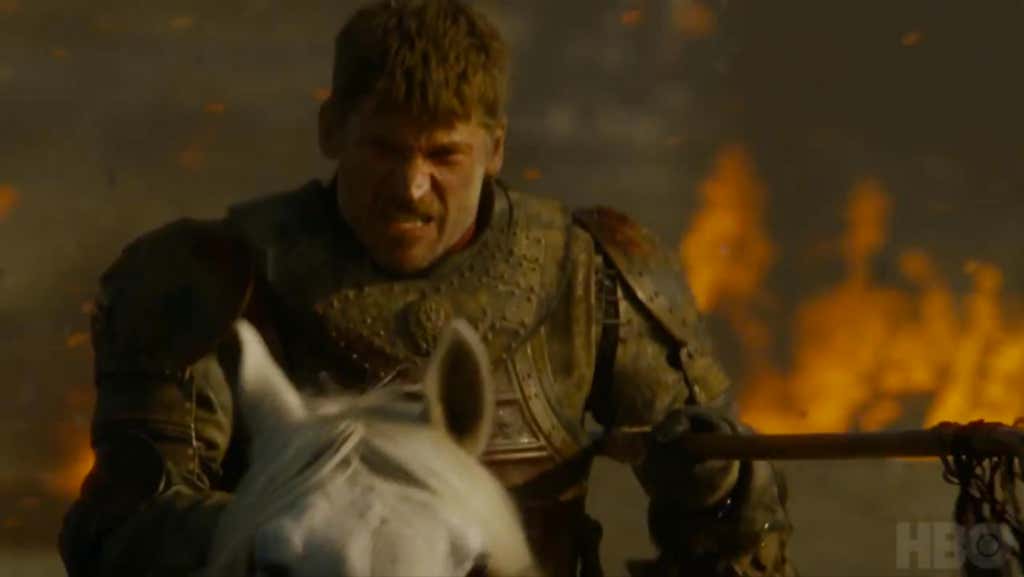 After last week’s leak, the early reviews of Game of Thrones (unfortunately) flooded the internet quickly and with unanimity: Last night was an episode that was going to leave us all breathless. The extra anticipation was hardly needed though-with Dany’s back against the wall and a war rapidly slipping through her fingers, she was going to have no choice but to uncork the secret weapon. She had to finally through down her ace card. After seven years of anticipation and buildup, the dragons were finally coming to Westeros.

For people who recently binged the show and are just now caught up, it’s hard to describe just how huge this moment was for those of us who have been watching Thrones since the beginning. Yes we’ve seen Dany’s three children in action before lighting up Slaver’s…excuse me, I mean Dragon’s Bay. And them take out the Unsullied masters and some blue-mouthed wizards in Qarth. But that was all meant to be an appetizer. We’ve known since Dany emerged from Khal Drogo’s funeral pyre that one day the Dragon Queen would be riding for Westeros. And it finally happened. It was like kissing a girl you’ve spent 7 years chasing. It was here. We finally had it in front of us. And somehow it didn’t disappoint.

Now a lot of people are rushing to call last night the greatest battle sequence in Game of Thrones history, some even saying it was the best episode in history. I am not going to go that far. Last night I threw this poll out on Twitter (wish there was a way to list five options so the last two didn’t have to be combined, figure it out @Jack).

Game of Thrones has had FIVE major battles that would for any other show, hell for any other MOVIE franchise except maybe Lord of the Rings, would be it’s signature masterpiece. How you order those five is entirely a matter of personal preference and I could make an argument for each one.

The Battle of Blackwater was something that up until that point, we had never seen anything like on television. It also was the most morally confusing (who to root for?!?!) and still Tyrion’s finest hour, helped by an acting masterclass by Peter Dinklage. The Battle of the Bastards was the most epic-feeling of each, a true Good v. Evil clash that left us cheering. It was almost biblical. Watchers on the Wall did the best job of not only giving us dizzying battle scenes but seamlessly weaving in important plot developments and characterization (Jon’s full ascendency to leadership, Ygritte, Olly’s revenge, the Brotherhood fully bands together after being fractured by a coup, ect). And Hardhome gave us the unforgettable image of Jon silently and slowly drifting away from the White Walkers as he stares the Night King directly in his eyes. For my money that’s still the most dramatic moment in Game of Thrones history. So am I going to tell you that Game of Thrones last night easily heads-and-shoulders surpasses all of those? No I am not. But does it belong in the same class as those? Absolutely. And the consistency these grand-scale moments are given to us by a, and let me remind you even though it’s so obvious, TELEVISION SHOW is something we’ve never had before. It’s a privilege to watch. 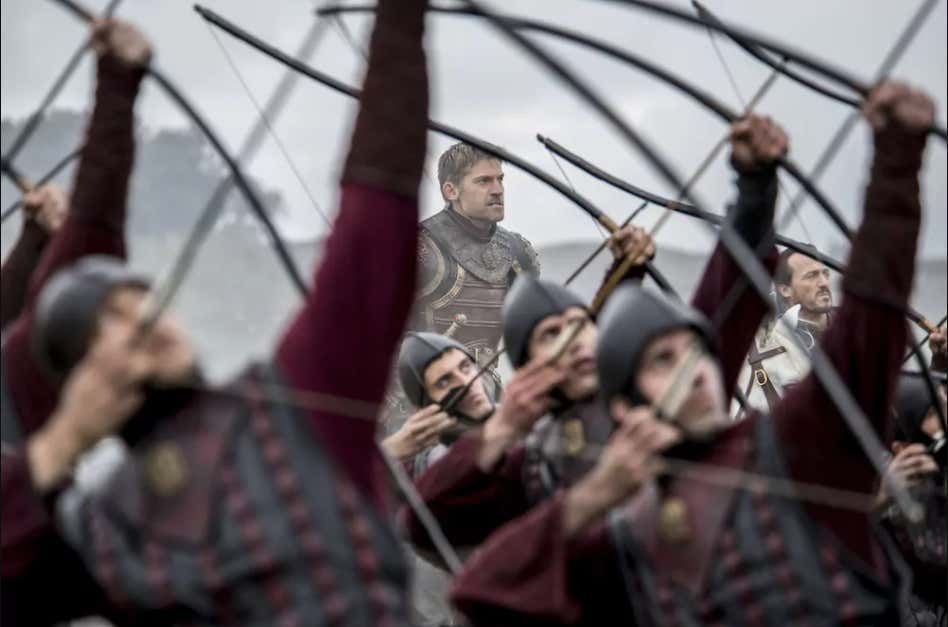 Last night won’t be the last epic battle we see. The stage is set for even more drama, and as the players advance we are closer to final culmination but still not even close to winding down. Jaime isn’t dead, he just isn’t, meaning he either is going to slip away (unlikely) or be taken prisoner yet again. This is going to be Tyrion’s first moral test of the personal civil war he’s engaged in. Is his loyalty with the Queen he is sworn to, the brother who helped him escape certain death and now he can return the favor for, or his thirst for revenge against Cersei? I don’t know the answer. I suspect that at the moment, neither does he. He clearly still loves his brother, rooting for him to abandon his horse instead of gallop to certain death. The question is now how much.

Jaime’s rescuer was, in my opinion, almost certainly Bronn. And by the way, Bronn is what tied the entire scene together. The knight of Blackwater is cut straight from the street tough/smart aleck cloth of character archetypes, always one stop ahead, always unflappable, never surprised by anything. He delights in reminding us of his scarred childhood and experience in the mud of battles because after all, how can you shock the man who’s seen everything? Last night as he watched the dragon unleash desolation, burning men alive and destroying entire battle lines with one breath, we saw something in his eyes we haven’t seen yet from him: fear. Fear of more than just dying, he’s accepted death a long time ago. Fear of something he has no concept of. That same fear that I believe is Dany’s true greatest weapon.

By the way, Dany isn’t the only one with a weapon in Westeros. Sansa, looking down at Arya dance and weave her way through Brienne of Tarth is just realizing what kind of lethal tool she now has on her hands. So does Baelish, although he might not like what he sees. For those who didn’t pick up on it, Bran’s remark to Littlefinger that “chaos is a ladder” comes directly from this soliloquy.

Bran basically is telling Petyr “I see and know everything”. To a guy like Littlefinger with a lot to hide, that makes him a threat. I wonder who that’s more dangerous to between them. However, Arya is clearly the baddest, most cold-blooded person in the North. That makes her a threat. Sansa is as successful and shrewd of a leader as anyone could have ever expected. That makes her a threat. Stark children vs. Littlefinger is going to be the undercurrent of the dramas of Winterfell in the next few episodes, the secret and subtle war as they jockey for position. Eventually this is going to boil over and burst. All it takes is the right piece of information to reveal itself for them to be at each other’s throats. As Arya told Sansa “Our stories aren’t over”, so you know that it’s going to come. But how, and when?

**Blog note: Arya having a valyrian steel dagger obviously means a ton. The way I am currently treating valyrian steel weapons is that they’re pretty much blinking, smoking Chekov’s Guns that signal THIS IS GOING TO BE USED TO KILL A WHITE WALKER. Again, I don’t know how. But I think it’s inevitable.**

And finally, the final Stark, or at least Stark-ish figure, Jon Snow, is still a semi-captive on Dragonstone. He didn’t murder Theon (too bad), which means Theon still has a part to play. I really hope it’s not some BS attempt at “redemption” when Theon has done too much to ever be fully redeemed, but somewhere down the line we can probably expect that. Obviously some tension is cooking between Jon and Dany and with the similarities of their backstories, personalities and compatible attractiveness levels…yeah it’s going to happen with all the inevitability of the two most attractive people on a freshman year dorm floor. But Jon is being forced in a tough corner by his-soon-to-be-beloved: Abandoning leadership of the North in a sacrifice to beat the White Walkers is an almost mirror scenario to the one he made with the Wildings as Lord Commander of the Night’s Watch. The same scenario that got him killed. He might have learned, but he almost might not have a choice. I genuinely don’t know what the right thing for him to do is. But it’s Jon and a tactical matter so, rest assured, whatever the right choice is, he’ll make the wrong one. It’s comforting really.

That’s it for this week. Last night we had Feitelberg on the Postgame of Thrones show with me and Clem and the reviews so far have been Dunkirk-level RAVING. Don’t take it from me, take it from the folks in my mentions and hit play. I’m on Twitter @CharlieWisco and will be writing the Sunday mailbag TOMORROW so if you want your question answered, get it in today or early tomorrow morning. My apologies to the 1500 of you who saw the spoilers in the live chat of last night’s live stream, we thought it’d be a cool feature to have and I guess will have to just shut it down now cause one asshole had to ruin it for everyone else. See everyone next week and Valar Morguhlis.