At one point this week it appeared the train was once again coming off the rails. The Tigers took two of three at the stadium which was just inexcusable and Cleveland took the first two, rather convincingly. Thankfully, things turned around on Saturday and Sunday to give us some life heading into a BIG week. A split against Cleveland on the road is no easy task, but the Bombers got the job done. There’s a lot to get into so let’s get started…

The Curious Case of Matt Holliday

Over the last month Matt Holliday was an automatic out. Prior to his illness mid-way through the season, Holliday had 12 homers with 47 RBIs hitting at a .262 clip. He was a strong bat inserted in the middle of the lineup and a huge locker room guy as he brought a strong veteran presence to a very young team. He returned in July to hit one homer and knock in four RBIs hitting an abysmal .130. In three games in August he was 2 for 12 and had made no progress in getting over the hump. I’ve been saying it for a week, but he doesn’t look healthy at all. Whenever he makes contact it seems like it’s a weak ground ball to the right side. I’m not sure if it’s still the illness taking its toll on the old vet, if he’s just finished, or if he actually tweaked his back. Whatever it is, making up a tweaked back injury is the right move to put him on the DL for now. He’s simply hurting this team being in the everyday lineup.

So who replaces him? Well, for this second Garrett Cooper, but there are a few other options.

Hicks is close to being ready. He’ll suit up for Trenton Thunder tomorrow and I’m guessing if all goes to plan he could rejoin the team in the Bronx for the weekend set against Boston. That’s just me speculating, but it makes sense. Hicks has looked great so far in his rehab at bats and we could really use his bat. The other option is our good friend Miguel Andujar. You may recall Andujar’s short-lived stint in pinstripes earlier this year. Actually you probably don’t because it was literally for one game, but he went three for four with 4 RBIs in a late-June game versus the White Sox. What has Andujar been up to since that appearance? Over the last month Andujar is hitting just over .370 in AAA Scranton. More importantly he’s becoming better in the field, as he’s only committed two errors at third since the end of June. That’s a huge improvement from earlier in the year when he was a gigantic liability at the position. So I personally would like to see Andujar promoted for a little bit, allowing Hicks to not rush back and possibly re-injure himself.

I want it to be known I need Matt Holliday back in the clubhouse as soon as possible. If he can come back and start hitting again that would awesome, but regardless he plays a big role mentoring these young guys and will certainly be of great value during the stretch run.

This sucked to see, but didn’t surprise me at all. With the addition of Jaime Garcia and Sonny Gray the Yankees were left with six starting pitchers for five spots. Girardi came out and said they would not be going to a six man rotation (something I preferred with their combination of aging pitchers and young guns with innings limits). Montgomery pitched one of the best games of his young career on Saturday, generating a ton of swings and misses from a very good Indians lineup. He gave up one hit in five innings, walking none, and striking out seven. Girardi pulled him early after just 65 pitches because of the innings limit that they appear set on sticking to. So now Jordan heads down to Scranton where he will continue to start (presumably on a strict innings cap). It’s gotta be tough for the kid to deal with this sort of thing, especially after having his best stuff all year in his final start, but he’s going to be back. When exactly that is I can’t be sure. Who knows, if Jaime Garcia struggles like did on Friday if they decide to keep rolling him out there? Who knows if they plan on bringing Montgomery back for September as a lefty out of the pen? If not, and they shut him down, he’ll be back as a consistent starter next year in the big leagues. What we saw out of the kid was very promising, and despite not having dominating stuff he still generates a TON of swings and misses. I’m excited to have him in the future rotation for quite some time.

That would be a resounding yes. God bless you Brian Cashman.

Judge is quietly on a four game hitting streak. This is the longest stretch he’s had since early July so yes I’m taking it as another baby step to getting him back on track. Seeing him take this laser to the opposite field yesterday was another good sign.

The strikeouts are always going to be there, but he’s not the hitter we’ve seen over the last month or so. He’s also not the hitter he was the first two months. He’s going to be a career .260-.275 hitter who hits 40 bombs a year who also plays great defense. Hopefully we’re getting closer to that type of player after this recent stretch. It’s four games I know, but I need something optimistic to look at with my guy. 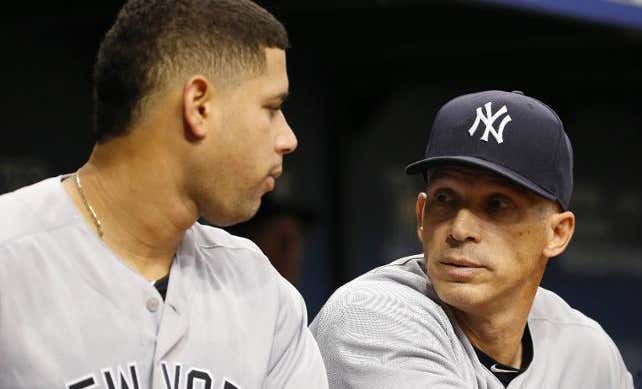 This is a weird situation for sure. On one hand we have Gary Sanchez who is clearly the better hitter and has the better arm, but has had a big issue with passed balls lately. Then we have backup catcher Austin Romine who is sound defensively and calls a very good game, but can’t throw out runners or hit the baseball. Problematic to say the least. Girardi, being a catcher, was pissed at Gary’s efforts of late in terms of getting his body in front of balls. He was benched Saturday and Sunday for Romine to hopefully send a message to the star catcher. With the day off today I’m confident we’re going to see a sharp, determined El Gary on Tuesday night. Romine might be the better signal caller, and possess the better glove, but Gary Sanchez needs to be in the New York Yankees everyday lineup PERIOD. He’s Gary fucking Sanchez and he’s awesome. Is he the answer at catcher for the long-term future? I’m not sure, but for this season he absolutely is. I need Girardi to put his vote of confidence in our young catcher RIGHT NOW.

BIG WEEK AHEAD. BIG. Big road series in Toronto to start the week, and then Boston comes to town for a weekend set. The Yankees sit three games back of first (two in the all important loss column) from Boston. They hold a two game lead over Kansas City for the first wild card spot. At the beginning of the year if you told me this would be the situation the Yankees would be in I’d go bananas. With a loaded bullpen, a very solid rotation, and a lineup ready to explode I’m very happy with two months to go. Buckle up everyone. 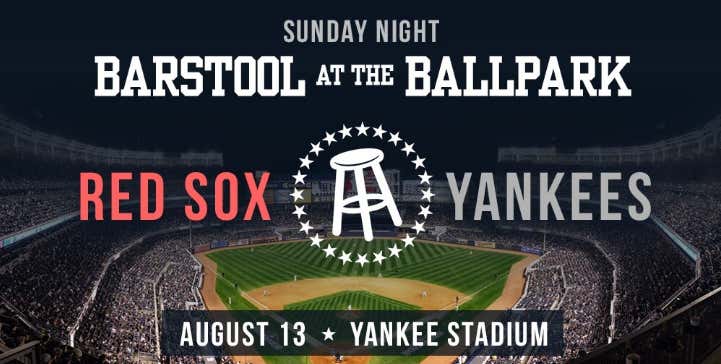 Make sure to buy your tickets for Barstool at the Ballpark Sunday Night Baseball for this Sunday August 13th. Use the link below to get your seat. Ticket gets you unlimited domestic beer from 6:00-7:30 along with hot dogs, burgers, and other food. From 6-630 we’re going to be the only people in the ballpark watching batting practice and drinking beers. Looks like CC vs. Doug Fister at the moment which smells like a whole ton of runs and even more fun. Hope to see all you guys there.