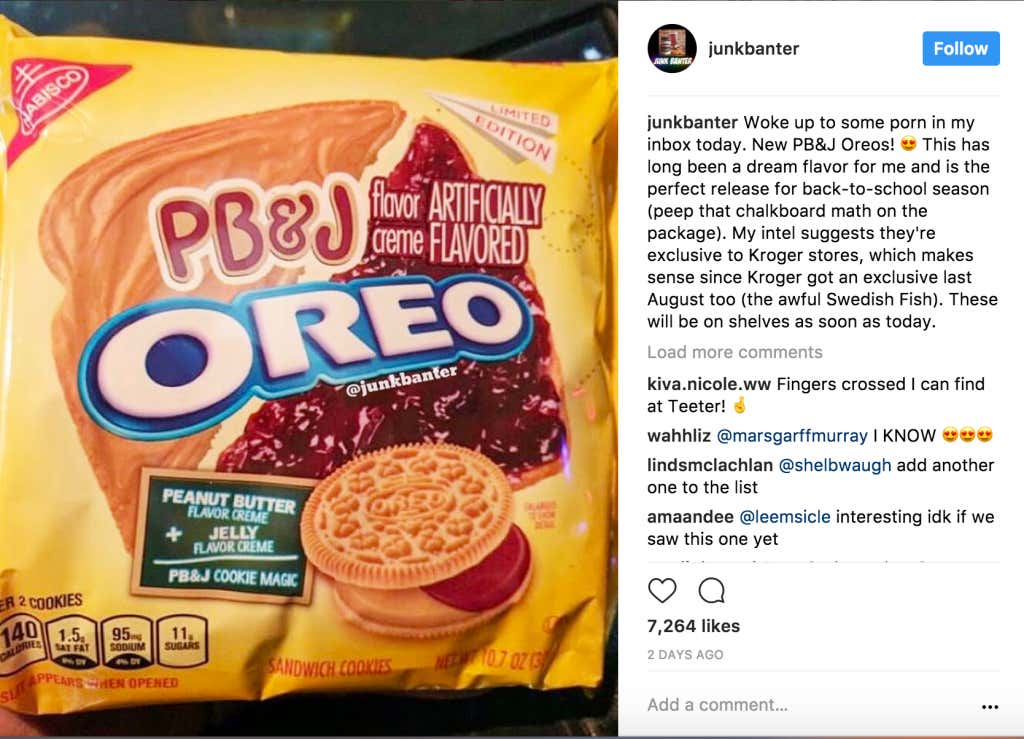 I’ve blogged and reviewed enough about Oreos on this here blog to know that they have gone all over the place looking for a great creme partner for their cookies no matter how much it made sense. It actually reminds me of when Kim Kardashian was seemingly hunting down athletes in an effort to get married in times for sweeps week. Finally she settled on Kris Humphries, shit hit the fan quickly, and everything ended in a divorce or annulment or some weird shit. That’s what combinations like the Swedish Fish Oreos or the Fireworks Oreos were like. Pairings that just made no sense at all other than a headline grab.

So to see Oreo going back to shit that should work was nice to see. Oreos are an American classic as is the peanut butter and jelly sandwich. Slap a bald eagle on that packaging and it would fit right in. The PB&J sandwich is one of those things that we just stop eating as we get older and don’t really know why, along with powdered iced tea and freeze pops. Oreo is flipping the script on all that age-discriminating nonsense and I for one applaud them.

My one issue/question is what jelly will be on these Oreos. I am a firm believer that it should be grape jelly on the PB&J. Get that strawberry shit the fuck out of my face. I’ve zoomed in on that Instagram post multiple times like its the Zapruder film and I’m like 55% sure it’s grape. But you never really know. And while we are at it, what the fuck is a Kroger’s grocery store? I can’t find them to save my life in my little corner of the New York suburbs. I’m still looking for those (likely) shitty Swedish Fish Oreos despite knowing that I will never find them. I’m just a fat blogger trying to give his reader’s a review of all snacks under the sun, good or bad. Hopefully we’ll get our mitts on these sooner rather than later for a future Snackin’ Off.

And since I mentioned grape jelly earlier, I might as well let my entire dream PB&J sandwich known. Smooth Skippy peanut butter, Welch’s grape jelly, and white bread with crust on (but sometimes the crust goes uneaten on a rough day).