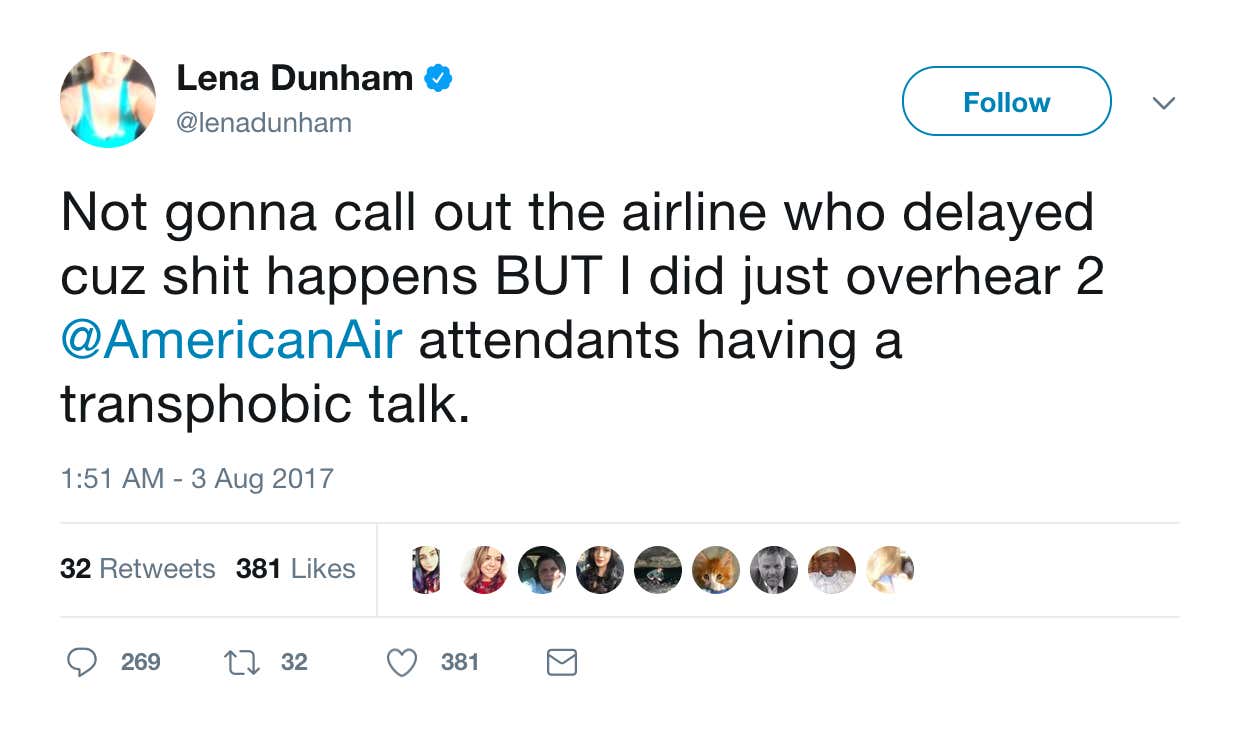 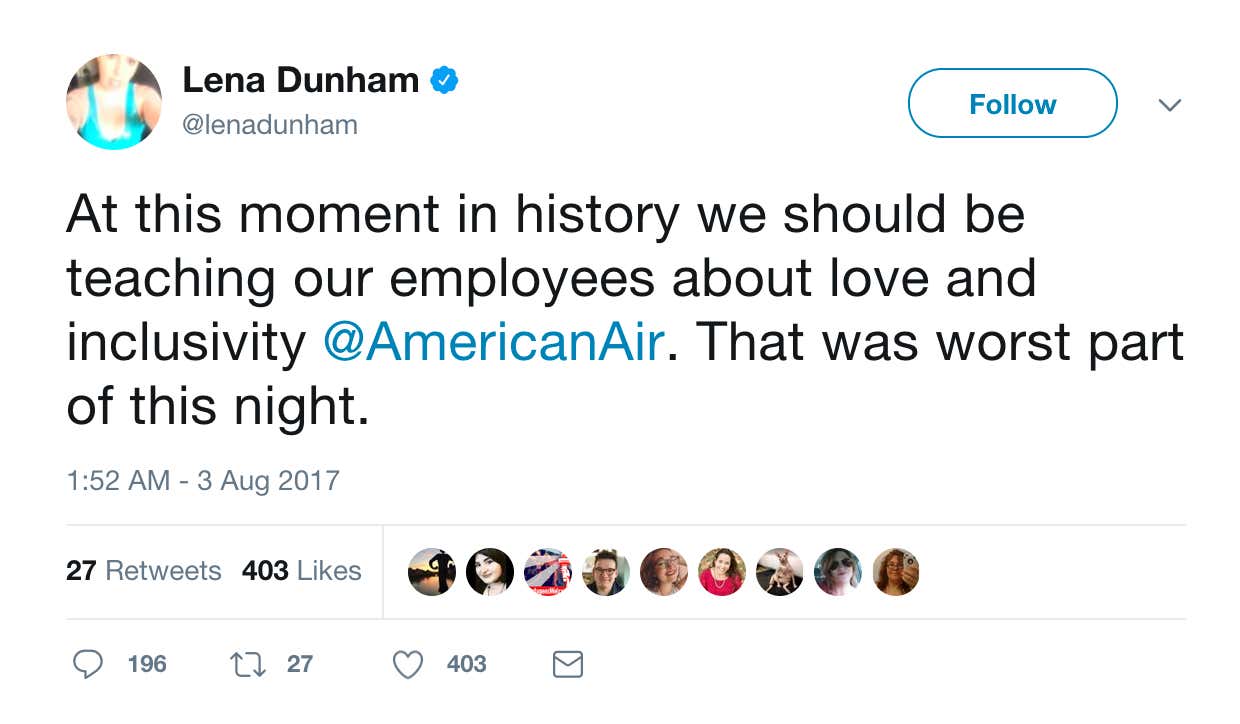 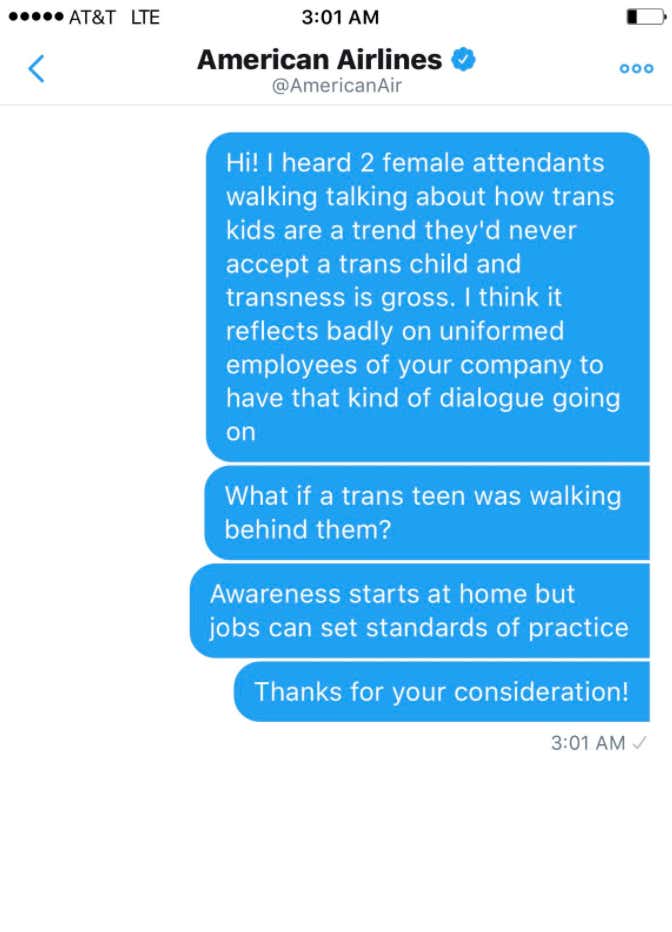 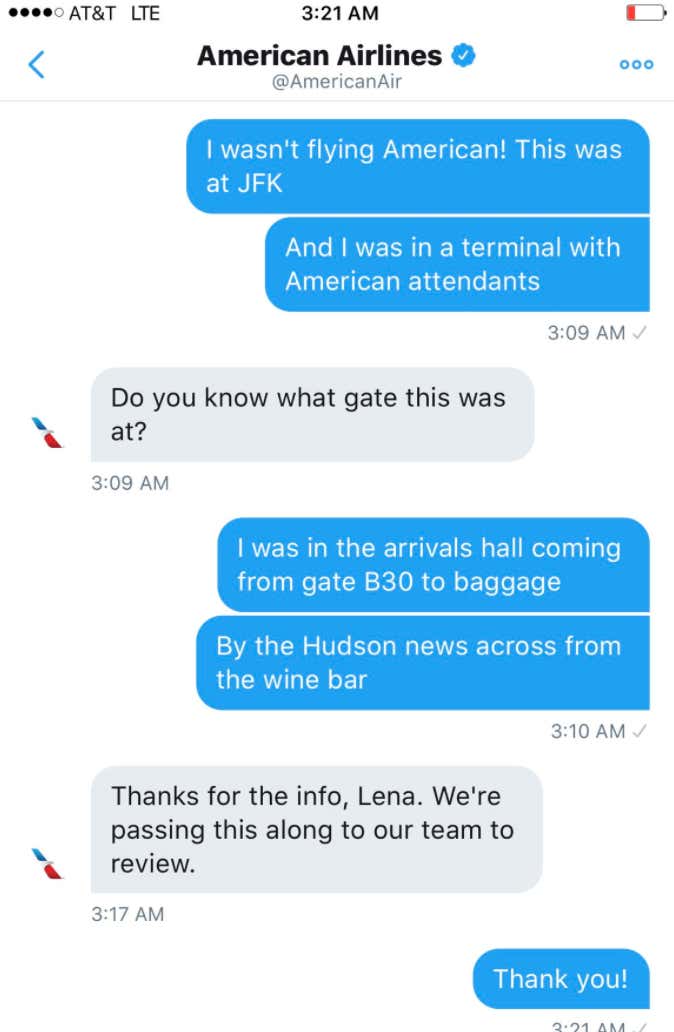 This is, beyond a shadow of a doubt, the most made up story I have ever seen in my entire life. Absolutely and completely concocted solely with the purpose of getting attention. This did not happen. There was no transphobic conversation. There may not have even been any flight attendants. Lena Dunham may not have even been at the goddam airport. That’s how much of a lie this whole story is.

And you know what? That might actually be better than the alternative. That might actually be better than if this story was true. Because if this story is true Lena Dunham is somehow an even BIGGER fraud. Two people representing a major company are being culturally insensitive and the best you can do is eavesdrop and tattle tale via DMs on twitter? No attempt to stop the hate. No attempt to educate. Just a very convenient pair of screenshots for the world to see. Some social media intern sitting at their computer like “you gotta be fucking KIDDING me,” realizing they need to come up with some bullshit response now that this leftover glob of toothpaste went public with her story. The best Lena Dunham could do – when the chips were down and trans people were being discriminated against and hated upon – is muster up some “thanks! We’ll look into it!” DMs after the fact? Wow, Lena. Just wow. Consider yourself a hero. Really fighting the good fight on the front lines. Fake ass wanna be social justice warrior. The only thing worse than an SJW is a FAWBSJW and that’s what this Swedish Meatballs lump of drama is.

For the sake of her whole cause, this shit better be a hoax. Better have been the plight of a lonely attention starved celebrity who realized it was time to get back in the public eye with some headlines. At least I can respect that hustle. Plenty of people out there grab headlines and chase fame. That’s easier to swallow than the champion of awareness and love and education doing absolutely nothing of substance when confronted with a disgusting display of hate and prejudice. Time for this dog abandoning, sister fingering, bag of milk to admit shes nothing more than a whiny complainer with a bit of a platform who actually doesnt accomplish any of her social justice goals and actually probably turns people against each other more than anything. 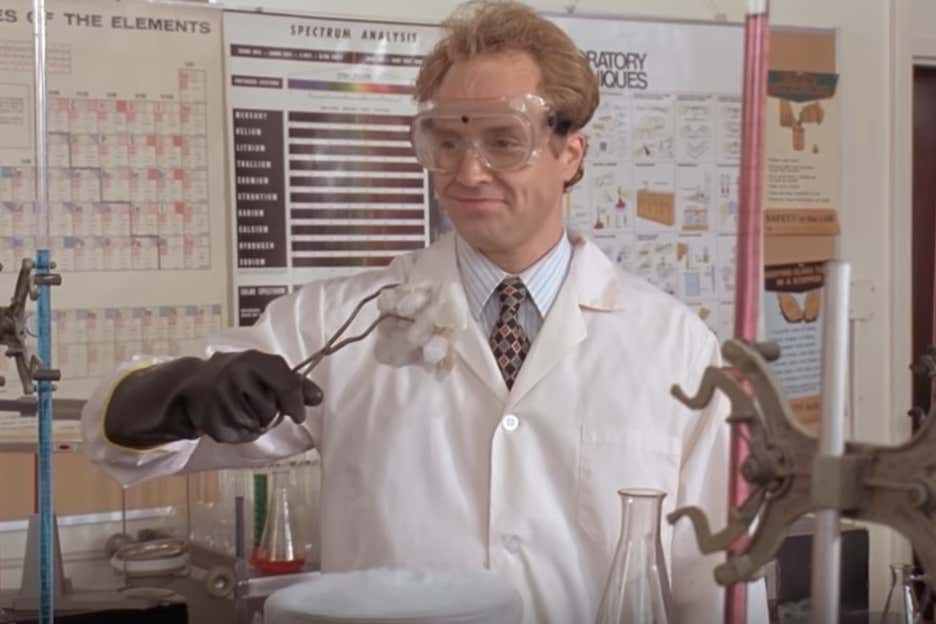 PPS – Not to go all Twitter nerd on you here, but Lena Dunham has 5 million followers and her tweets about this shit get like 30 RTs. 100 RTs. Thats borderline impossible. I’ll always flame her no matter what she does but its nice to see that in general, people dont give a fuck about her nonsense. The only traction she gets on the internet now is people hating her. I feel like we’ve officially won the war and now we’re just running up the score.