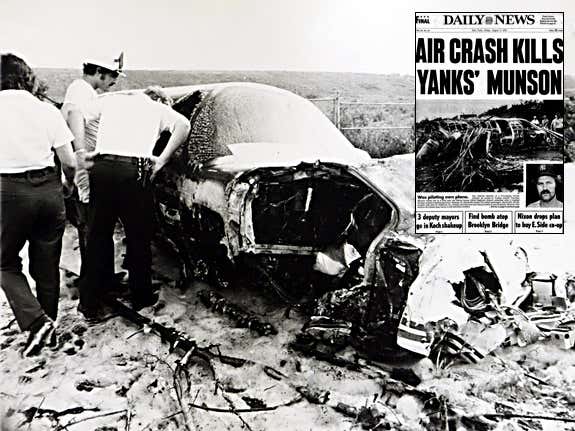 New York Yankees Captain Thurman Munson is killed while taking flying lessons during an off-day in Canton, Ohio. The 32-year-old catcher was often home sick and had been flying for over a year to visit his family which lived in Ohio on Yankee off days. Munson had spent the day practicing takeoffs and landings with his flight instructor Dave Hall and friend Jerry Anderson on board. On the fourth landing, Munson clipped a tree and crashed. Hall and Anderson survived but Munson who was pinned in the cockpit was unable to escape as the cabin caught fire.

Born in Akron, Ohio on June 7, 1947, Thurman Munson was the son of World War II veteran who worked as a truck driver. A three-sport star in high school, Munson played baseball at Kent State. He first caught scouts’ attention in 1967, when he batted over .420 in the Cape Cod Summer League. The following year, Thurman Munson was selected fourth overall in the MLB Draft by the New York Yankees. Munson quickly worked his way through New York’s farm system, making his debut on August 8, 1969. The following season Thurman Munson was named American League Rookie of the Year with a .302 average, six home runs, and 53 RBI.

In an era in which the Yankees were struggling after their dynasty years and the retirement of Mickey Mantle, Munson became the face of the franchise and the hope for the future. When George Steinbrenner purchased the Yankees in 1973, Thurman Munson became his personal favorite as they shared roots in Northern Ohio. Steinbrenner also liked Munson’s hard-nosed approach on the field and his leadership abilities. In 1976, Thurman Munson was named Yankees Captain, the first since Lou Gehrig in 1939. The position had previously been retired, but the Yankees boss proclaimed if Lou Gehrig met Munson he would be all for the decision. The 1976 season, was Thurman Munson’s best season as he hit .302, with 17 home runs and 105 RBI on the way to winning the American League MVP as the Yankees moving back into their renovated stadium returned to the World Series. Despite being swept by the Cincinnati Reds in the Fall Classic, Munson has a series to remember going 9-for-17 with a .529 average. The Yankees would come back to win the next two World Series, with their captain playing a key role. In postseason play, Munson had a life time average of .357 with three home runs and 22 RBI.

The 1979 season was a tough one for the New York Yankees, as they were in fourth place with a record of 58-48 as they trailed the Baltimore Orioles by 14 games. On August 1st Thurman Munson went hitless but scored a run after a first inning walk as the Yankees beat the Chicago White Sox 9-1 at Comiskey Park. While his teammates returned to New York, Munson went to visit his family in Ohio. At the time, Munson was dealing with a sore knee from the wear and tear of catching and started the game at first base. The Yankees captain often went home on off days, as he grew home sick during the season, he even had a desire to one-day play for the Cleveland Indians so he could be closer to his family.

After spending much of the day with his family, on August 2nd Thurman Munson went with a family friend Jerry Anderson and his flight instructor Dave Hall to look at his new jet, a twin engine Cessna Citation, with the tail number N15NY. Munson had been flying for 18 months and logged 33 hours of flight time when he began practicing take off and landings with his new plane. The first three cycles had gone without incident. However, on the fourth cycle, he was instructed by the tower at Akron-Canton Regional Airport to switch to runway 19 after using runway 23. At a little past 4:00 pm, Munson and his crew were going in for a final approach when things began to go wrong. The plane was sinking faster than anticipated. Used to flying propeller planes, Thurman Munson is new to flying a jet and fails to adjust to the drag created when he lowered the gear. The Cessna clips the tree tops and falls 870 feet short of Runway 19. The plane stops skidding against a tree outside of the airport. Both Anderson and Hall survived the crash but were unable to pull Thurman Munson out of the cockpit as he was pinned by the instruments. The two passengers attempted to remove the pilot from his seat, but as flames overtook the cabin they knew they had to get out before they suffered the same fate as Munson.

The news of Thurman Munson’s death punched the Yankees in the gut as they spent a key weekend four game series with the Orioles at Yankee Stadium, dealing with their grief. Playing on Monday Night Baseball just hours after burying their former teammate, Bobby Murcer who was Munson’s best friend on the team drove in all five runs in a 5-4 win. The Yankees would finish the 1979 season in fourth place, posting a record of 89-71. The Yankees would move quickly to retire Thurman Munson’s #15, while his locker remained unused until the old Yankee Stadium was closed for good following 2008 season. Thurman Munson’s locker is currently on display at the New York Yankees museum in the new stadium. There was a movement to put Thurman Munson into the Baseball Hall of Fame right after his death but those efforts failed, despite numbers that were more than Hall of Fame worthy. In ten full seasons, Munson was an All-Star seven times, won three Gold Gloves while his .292 average is tenth best among catchers all-time.