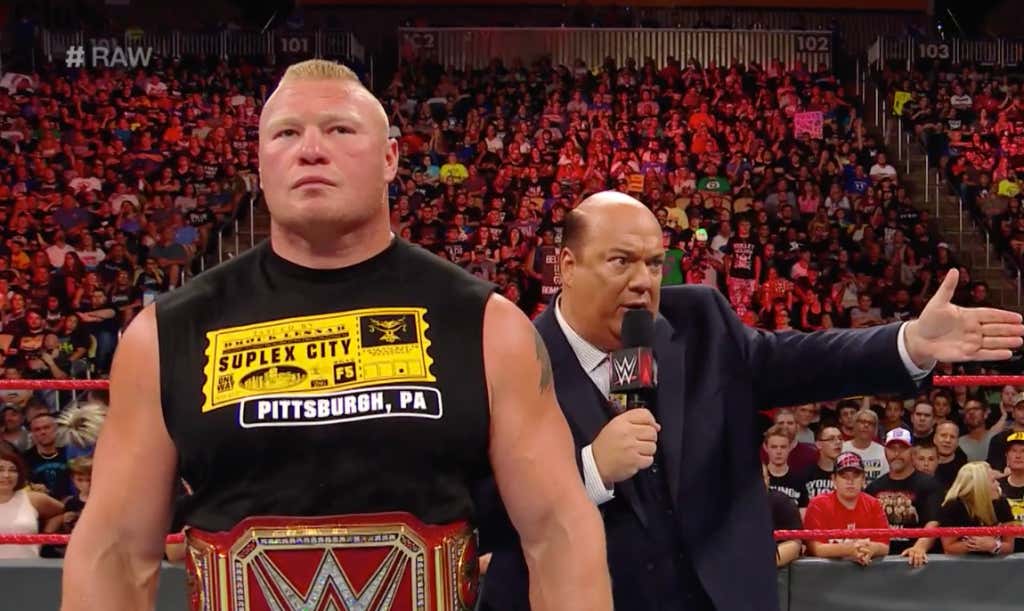 Welcome to the weekly RAW recap! I’m your special guest host – well – not so special, and not a guest, but I’m Robbie Fox, and you’re stuck with me. I missed RAW live last night for the first time in many months, because I was seeing All Time Low at the Central Park Summerstage (which is actually a very cool venue if you were hitting it up this Summer), but I caught up and I’m here now, so let’s talk about the fuckin’ graps.

The opening segment of the night was once again the most important and most talked about, where Paul Heyman announced that if Brock Lesnar loses his Universal Championship at Summerslam, he’ll be leaving the WWE. I got countless tweets asking me if this was legit or not, and I can’t answer that question at this time, but I can tell you what I know. Brock Lesnar wants to fight Jon Jones as soon as possible. I expect him to un-retire and enter the USADA testing pool in August. Brock Lesnar’s WWE contract doesn’t expire until this year’s WrestleMania, but he has the leverage and star power to opt out right now, CM Punk style. So this Summerslam stipulation is one of two things:

1. A way to get Brock out of the company so he can go fight Jon Jones
2. A very clever false flag

Personally, I think it’s the former and Braun Strowman will reign victorious. It really amps up the excitement for the match, though! One more thing on this segment: Heyman’s logic and reasoning for everything was flawless. I think his promos have gotten slightly stale in recent years, but this was nice and different.

Another good Hardy Boyz TV match, but the tag division is slightly being exposed in how shallow it is…and by slightly I mean entirely. There’s like 4 tag teams. You need at least 6 on this three hour program.

Gotta be honest here. I do not like this Jason Jorgle gimmick at all. I think part of it is knowing Chad Gable is the better talker and in ring worker, and having that in the back of my mind, but it’s just so hard to get behind Jordan when his character is that he is a little spoiled kid. Last week Angle got mad at a member of the Women’s roster for suggesting she’d fuck JJ, and now every heel is just like “YOU’RE GETTING EVERYTHING BECAUSE YOUR DAAAAAAAAD IS THE BOSS”. His comeback here was “DON’T TALK ABOUT MY DAD!” and attacking the Mizterouge. I hope it gets better for him.

I couldn’t pay attention to this match in the slightest because Seth Rollins has a new entrance remix that scared the ever living fuck out of me.

This was obviously a super simple attack/brawl type thing, but I wanted to mention if for the simple fact that when Finn’s first heartbeat hit, the arena lit red as opposed to white, signaling the Demon is coming. I thought that was really cool.

The highlight of the show for me was this triple threat match, but it also suffers from the 50/50 booking and same person feuding I’ve been complaining about for weeks. Let’s keep these three and Lesnar away from each other until Summerslam, no?

Another one I’m posting just for one note…Elias Sampson is not just Elias. No last name. Vince is really dumb sometimes.

Big CASS vs Big SHOW battled for the rights to be big, and Enzo was on the outside being a cheerleader for Show. Makes him kinda pathetic in my mind, having his big brother fight the bully for him, and then going for a cheapshot on the bully, and then getting his ass kicked anyway. I’m not sure who thought that one out.

RAW was decent this week, nothing special, nothing horrible. I’ll see ya tomorrow for our talk about SmackDown. Enjoy it!