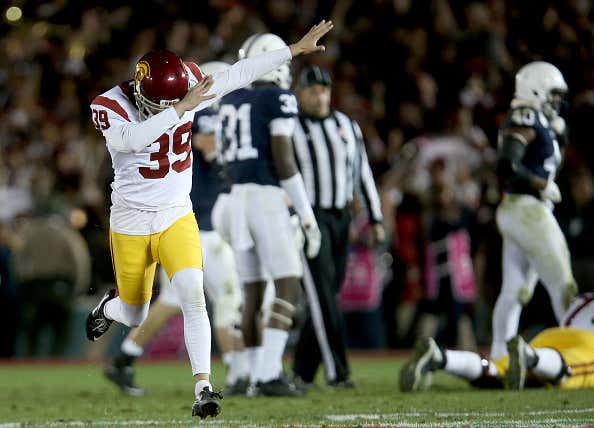 LA Times – The girlfriend of former USC kicker Matt Boermeester said Sunday that the Title IX investigation that led to his removal from the school’s football team was “horrible and unjust” to her and Boermeester.

Zoe Katz, 22, a senior, said in a two-page statement her attorney emailed to The Times that Boermeester “has been falsely accused of conduct involving me.” Katz confirmed that the statement was hers. Her attorney, Kerry L. Steigerwalt, said that USC alleged that Boermeester shoved Katz outside her home.

USC suspended Boermeester in February while the school investigated what it called a “student-conduct issue.”

Mark Schamel, an attorney representing Boermeester, said Boermeester was not permitted to return to USC following the school’s investigation, in which USC alleged that Boermeester assaulted Katz. Katz has denied this, as did Boermeester, through his attorney.

Couple of things that I don’t understand about this story that is coming out of USC.  Number one.  How rough was this “roughhousing” that a neighbor felt inclined to pick up the phone and call the police?  Assuming this wasn’t somebody who had it out for him and was actually concerned, I’d imagine it was a little more than cute pushing?  That’s the strange part.  I mean when the girlfriend is coming out THIS strongly and stating THIS vehemently that Boermeester did absolutely nothing wrong, that they were just joking around, that he is 100% innocent of the stuff they are saying about him – it’s hard not to believe her. She didn’t show up to a hospital with bruises all over her face bleeding from the lip saying she “walked into a door.”  She was messing around with her boyfriend at their apartment.  I obviously wasn’t there and haven’t seen video or anything but I’m inclined to side with a girl who is defending him so passionately.

In the statement, Katz said she and Boermeester have dated for more than a year. The Title IX investigation began, Steigerwalt said, after a neighbor witnessed Boermeester and Katz roughhousing. The neighbor told his roommate, who told a coach in USC’s athletic department that Boermeester was abusing Katz. The coach then reported the incident to the Title IX office.

Katz said she was summoned to a mandatory meeting with Title IX officials, where she told investigators that the two were playing around. Katz was subsequently told that she “must be afraid of Matt,” she said. She told officials she was not. Boermeester has not been arrested or charged with a crime.

“When I told the truth about Matt, in repeated interrogations, I was stereotyped and was told I must be a ‘battered’ woman, and that made me feel demeaned and absurdly profiled,” Katz said. “I understand that domestic violence is a terrible problem, but in no way does that apply to Matt and me.”

Katz said that she has “never been abused, assaulted or otherwise mistreated by Matt.”

Boermeester, who kicked the game-winning field goal for USC in the Rose Bowl, was suspended from USC, then barred from campus and from meeting with USC’s athletic trainers or members of the football team. The school also barred Boermeester from contacting Katz, she said.

Number 2.  How did a rule that was supposed to help women and had such good intentions go so off the rails to the point where kids have their entire lives ruined due to one single unconfirmed allegation from a nosy neighbor?  Key word allegation.  One person’s interpretation of an event they are seeing through their window with no context results in a student being banned from campus and having his name forever linked to this in Google searches after a ruling from people hearing the allegations second-hand.   And it’s not even a he-said she-said.  It’s a both-said as loud as they can, screaming from the rooftops that nobody did anything wrong.  Instead the USC administration is dictating to them how they should feel.  That doesn’t seem fair, to either person.

Katz said the Title IX office made her feel “misled, harassed, threatened and discriminated against,” and caused her to hire an attorney.  “The Title IX office’s response was dismissive and demeaning,” she said.

In the statement, Katz said she is coming forward now to clear Boermeester’s name and lobby for change in the Title IX office’s investigative procedures.

“Matt Boermeester did nothing improper against me, ever,” Katz said. “I would not stand for it. Nor will I stand for watching him be maligned and lied about.”