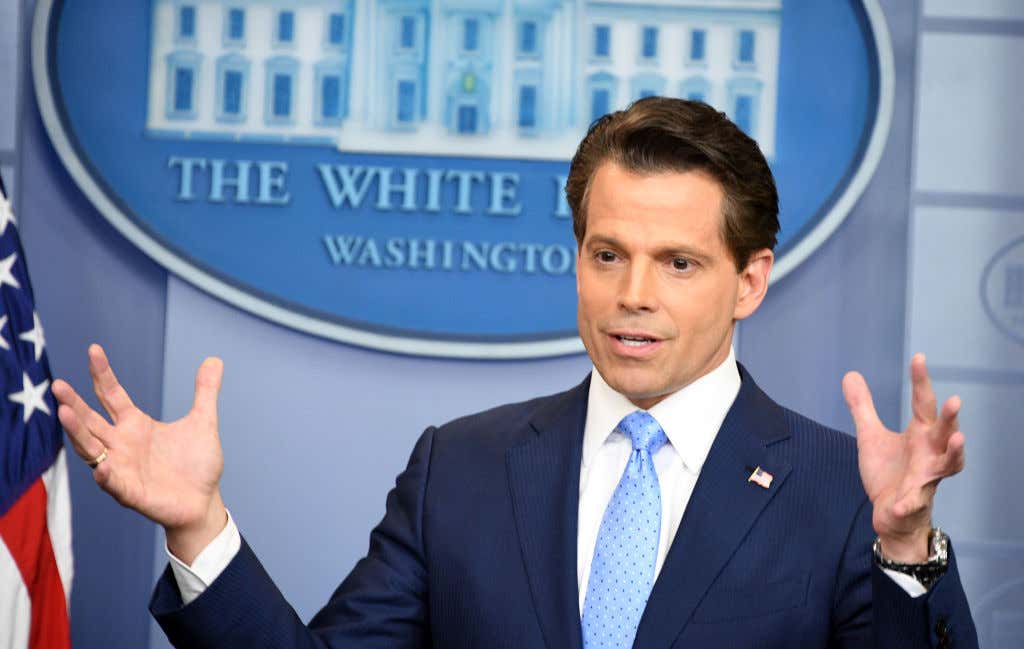 Yahoo — Anthony Scaramucci’s wife filed for divorce while she was nine months pregnant and, when their son arrived on Monday, he congratulated her by text message, according to reports in the United States.

The new White House communications director, who in the space of a week has gone from being a little-known financier to a household name – thanks largely to his expletive-laced rant about his new colleagues – is yet to confirm the divorce.

He tweeted a request for prayers for his family.

Married for three years, she gave birth to their first son, Nicholas, in early 2014.

Their second son, James, arrived on Monday in New York City, while Mr Scaramucci was at a Boy Scout jamboree with President Donald Trump in West Virginia.

“When James was born, he sent her a text saying: ‘Congratulations, I’ll pray for our child,’” a source told the paper.

“The pain runs deep. Anthony tells her she’s not that smart, that he’s out of her league.”

Alright I’ll admit it — this guy blows Spicer out of the water. It’s not even close. It’s a rout. He might not have the career longevity of Spicer — that impressive 6 months — but his best is FAR GREATER than Spicer’s best. He honestly makes The Spice Man look like the most average, mundane White House spokesman ever.

But this story? All of the pieces of the puzzle make this one my favorite. First, wife filed for divorce a couple weeks ago. Second, she gives birth to their second son a week after he takes over White House communications. Third, he’s not even close to there for the birth; instead he’s with Donnie at a boy scout speech. Fourth, he texts “I’ll pray for our child.”

That’s a raven Ghengis Khan would send to one of his wives while he’s off on conquest. “I’ll pray for our child.” And that’s how The Mooch reacts to the birth of his second son? Incredible.

I guess you gotta respect that he’s just married to the game. He’s the face of the most powerful building on planet earth. He doesn’t have time for lowly things like family or his wife or his new-born child. Fuck that. For those of you West Wing’ers out there, this is when Leo’s wife says about his job, “It’s not more important than your marriage,” to which he flat up responds, “Umm yes, it is more important than my marriage.”

The Mooch is loose baby. Who knows how long we’ll be blessed with this diabolical character — enjoy it while we’ve got it.