LAS VEGAS — The group that supplied officials for the Adidas Uprising Summer Championships, in which LaVar Ball successfully petitioned for a female referee to be replaced after she gave him a technical foul on Friday, will terminate its five-year relationship with the sneaker company due to the incident. “The events that led to the removal of a female official on Friday are something that shall not and will not be accepted within the officiating community,” Court Club Elite, an organization that trains and develops referees at amateur and professional levels, said in its statement to ESPN. “Adidas and their leadership acted in a manner that does not parallel our views on integrity or professionalism, and neither should be compromised as they were in this situation. It was clear that the actions of the official in enforcing and addressing unsporting behavior were defendable and fitting of the behavior displayed; however, the agenda and lack of courage to do the right thing by Adidas leadership sent a clear message that the game and those chosen to protect the integrity were not of priority.”

On Friday morning, LaVar Ball threatened to pull elite recruit LaMelo Ball, his son, and the rest of the Big Baller Brand AAU team from the floor after he was assigned a technical foul by a female official, the same official who gave him a technical foul in a game Wednesday. Ball yelled for Adidas officials to have her removed.

They obliged and replaced her midgame with a male official, though Adidas rep Chris Rivers said the shoe giant made the decision, not Ball. Later, the contest was stopped with five minutes to play after Ball received additional technical fouls. Earlier, ESPN reported that Adidas had pressured officials from Court Club Elite to “put three officials on the game who will keep [LaVar Ball] in the building” due to his drawing power and its interest in Los Angeles Lakers rookie Lonzo Ball, per a source.

“This appalling story about the female referee removed during an AAU game warrants serious discussion,” the National Basketball Referees Association, the union representing league officials, tweeted Sunday. “First, the misogynistic comments and intimidation by the coach have no place in basketball or anywhere. The actions by Adidas show what happens when an organization does not support those tasked with protecting the integrity of the game. We support the referee community. This offensive behavior cannot stand [and] hurts all those involved in basketball.”
“As we conclude the 2017 Court Club Elite referee experience, I’m incredibly proud of our members as they responded in a highly professional manner to the challenges of officiating many games in the Adidas Uprising Summer Championships,” Rush said in the statement to ESPN. “This group of officials reflected professionalism and integrity in their decision-making, both on and off the court.”

Rush said members of the officiating community had questioned his organization’s decision to work the Adidas tournament after Friday’s incident. The former NBA official said the tournament is a training experience for officials who travel from around the world to learn and grow, an opportunity he did not want to prematurely terminate. This week’s tournament featured multiple seminars for officials, led by officials who work in Division I college basketball and the NBA. Rush said that anyone who assumes his organization stayed only for the money should know he donates his personal proceeds to charity. He said he also didn’t want observers to assume his group had cowered to Ball. “[The officials’] days consisted of several hours of classroom and video breakdown sessions in addition to games worked,” the organization’s statement said. “Forfeiting those opportunities would have allowed one man’s unreasonable request, and the acceptance of that request by those who lack courage, to overshadow the greater purpose for our group in a highly effective learning environment.”

Live look at Adidas when the Referees said they were breaking their referee contract with them….

Umm we talking about referees? We talking about referees? Listen should a coach be able to demand that a referee is removed from a game? Of course not. But let’s not act like this is real fucking basketball. I don’t even know what this is. Adidas Uprising Championships? What the fuck is that? Like yeah I know there are good players and shit but the refs matter the same as they do in intramurals. They are just there to get shit on. I mean every clip I see of these games you got coaches running all over the court to begin with.  They all look like And 1 games.  This is more like the Kardashians than real basketball.  Sure Lavar acted like a baby, but the ref community needs to chill out. This is an Adidas league. Adidas isn’t there to protect the integrity of the brotherhood of referees. They want publicity and to sign Lonzo Ball to a shoe contract. So obviously they aren’t gonna piss off Lavar. The refs and their unions and meetings and film session for this league just sound like band camp geeks. Seriously imagine being in Vegas and sitting in a room studying film on how to call 3 seconds? Kill me please. 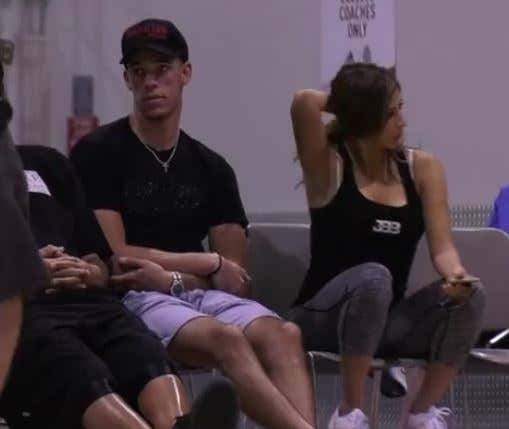