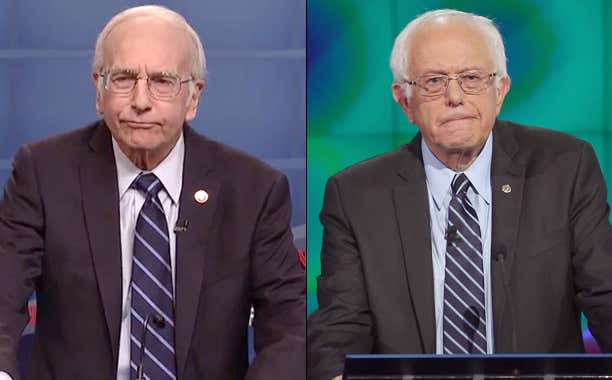 ABC 7- What is the key to Larry David’s pitch-perfect impression of Sen. Bernie Sanders? It turns out the two are related.

David, who imitated Sanders on Saturday Night Live during the campaign, said he discovered the link while making an upcoming episode on “Finding your Roots” on PBS.

Both men were born and raised in Brooklyn.

This story is almost too real to even have to blog about. If you take a good look at Bernie Sanders and Larry David, they are both the quintessential old, jewish men who like to complain about everything and anything. David and Sanders literally look like every guy I workout next to at the JCC or I see on the country club golf course.

Don’t believe me that these are two are definitely related? Remember SNL’s “Bern Your Enthusiasm?”

That clip is a flawless representation of how both their worlds collide, proving they are related. I could not imagine anything better than a family passover seder with Larry and Bernie at the helm.

I can only hope that one day, when I am a crippling, bald, jewish man in my 60s complaining about a lack of lox on my bagel from Goldbergs Deli, that I can cause a ruckus like Larry David and use my keen political style like Bernie Sanders to get more lox on my everything bagel.