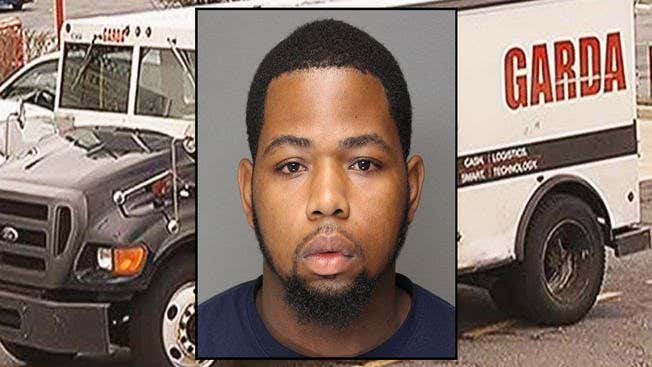 NBC4- A security guard employed by cash vault and transport company Garda stole $100,000 in cash in his first day on the job, police in New Jersey say. Fairfield police say 19-year-old Larry Brooks was caught on the company’s surveillance cameras stealing $100,000 while working. The company’s security officers were able to recover about $86,000 from a car parked in Elizabeth, where Brooks lives, before the company contacted police. Brooks was arrested on a charge of second-degree theft, then released on his own recognizance.

I’m sure many people will criticize Larry Brooks for getting fired his first day at a new job for multiple reasons. Job hunting sucks. Being broke sucks. Having your mugshot get plastered all over the internet sucks. But you will hear no such slander from my point of view. You know why? Because every time I see an armored car sitting in a parking lot, all I can think about is driving it to Mexico and creating my own Zihuatanejo like Andy Dufresne. And if that truck is running with no guard in sight, a little bit of blood may rush below the belt. If you don’t at least have the thought of robbing a Brinks truck run through your head when one drives by, you straight up hate capitalism.

So to then go to the next level and BE the security guard in charge of a bunch of unmarked currency, you have to feel like you are the a wolf in the henhouse. I don’t know what interviews are like for armored truck companies. But I imagine they go deeeeeep into your past searching for any priors and shit like that and the interview questions probably are all about how trustworthy you are. But if you don’t put someone in a room unattended with at least $100K just to see if they take it, anything that happens is on the security company. Yeah you have to fire the guy but you shouldn’t press charges. Would you ask for a shark to be arrested for biting you in chum infested waters? Of course not. Same thing with putting a free pile of money in front of humans. I am firmly on #TeamLarry until I die. Especially because he apparently found a way to spend $14,000 between the time he stole the money and the time he was caught. That’s a man that lives life one move at a time and lets the chips fall as they may. Larry can play for my team any day of the week.