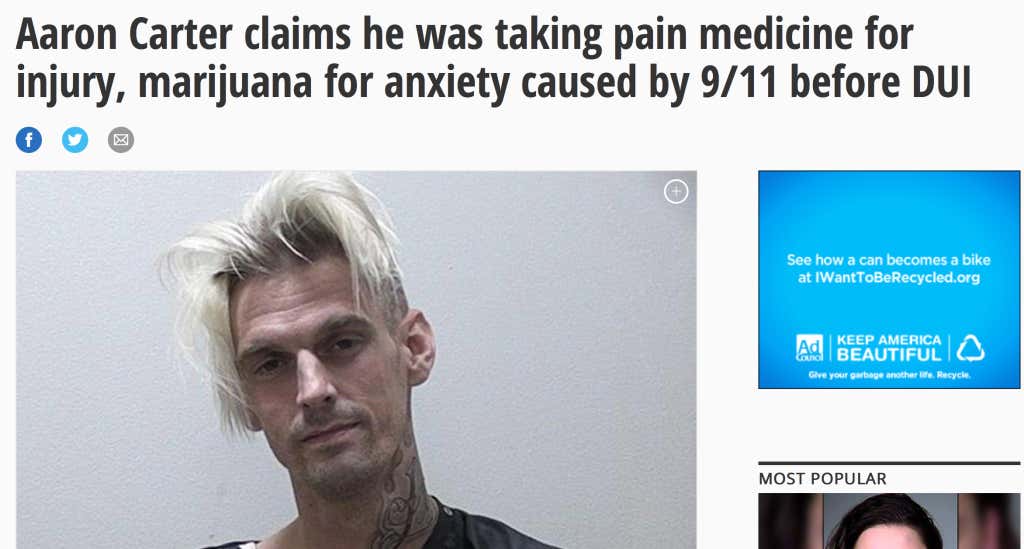 Is this the new wave, blaming all of life’s shortcomings on terrorist attacks? I’ll tell you what, I don’t hate it.  Aaron Carter isn’t a crackhead, he was a really smart 8th grader who understood the geopolitical effects of the Twin Towers falling, was terrified of more violence, and got addicted to weed to quell his fears. It’s been downhill since then.

Will Ford? She’s not a failure because she’s a cookie cutter blonde who didn’t catch on in the early 2000s because Christina/Britney weren’t leaving any room for anyone, not even the holy ghost, on the airwaves. She failed because her second single was set to release on 9/11 and people weren’t in the mood to go to middle school dances on that day. Pop stations weren’t playing her hit because it wasn’t exactly a joyous day. If it wasn’t for those pesky Saudis she would’ve been a superstar.

It’s not the worst plan ever. Yeah, it kinda lets the terrorists think they did more damage than they actually did and that sucks. It’s not great to know that Al Qaeda is over there celebrating tearing down symbols of our nation, throwing the economy into turmoil, dividing the country, and sending us into war but they’re ALSO celebrating killing Willa Ford’s career and giving Aaron Carter anxiety. I’m not big into giving terrorists things to celebrate.

Still, I could get behind the whole blaming 9/11 for everything movement. Why do I suck at English? Well, on 9/11 I was in English class then they pulled us all out and had us watch the news in Social Studies for the entire day. Never got that lesson back. Why was I speeding, officer? I was just thinking about the bravery those firefighters showed rushing toward the towers and got inspired. I’m not crying over you, recent ex-girlfriend, I’m remembering all the lives that were lost on that fateful day.

You sound like a real asshole but, if you’re in a tight spot, you can pretty much blame anything on 9/11. Something to think about.

PS – “I Wanna Be Bad” by Willa Ford fucking fucked. It probably wasn’t all bin Laden’s fault that she didn’t become a star but this song and video were hot as hell. Hot enough to land her Mike Modano as a husband (for a period of time) even though she never had much of a career.