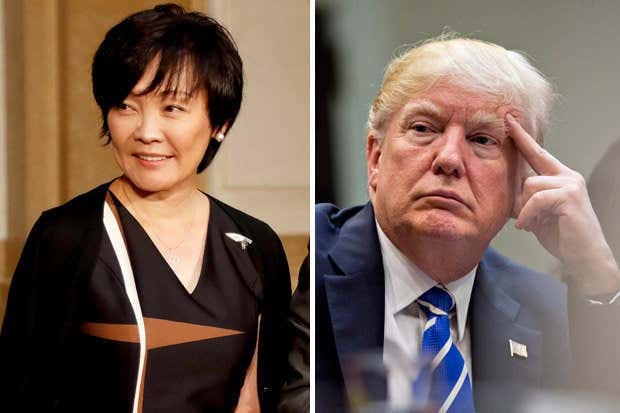 “So, I was seated next to the wife of Prime Minister Abe, who I think is a terrific guy, and she’s a terrific woman, but doesn’t speak English,” Trump told reporter Maggie Haberman.

Haberman said that must have been awkward, and Trump agreed, noting the dinner went well over an hour and a half.”

Akie Abe, first lady of Japan and wife of Prime Minister Shinzo Abe, has spoken English many times in public, fluently, with only the slightest accent.

She chatted, for example, about a shared admiration for star baseball pitcher Daisuke Matsuzaka (then of the Boston Red Sox), at the White House with President George W. Bush and his wife Laura in 2007. She has chatted with Laureen Harper, had cocktails with Sophie Grégoire Trudeau, spoken to business leaders in New York, and to a Virginia elementary school audience with Michelle Obama” – (National Post)

Power Play. That’s all I gotta say.  I can’t tell you how many times I’ve pretended not to speak Chinese to avoid awkward situations. I wouldn’t really say “pretend” as I actually can only speak Chinese at about a 4 year old level but it can be quite helpful to pretend you know absolutely zero words in some situations. “Sorry sir, I have no idea what you’re saying, I’m just going to walk backstage at this concert right now and would appreciate if you stopped waving your hands at me.” It’s also a great way to get out of small talk as “sorry I don’t speak Chinese” is a fast and polite way to end any conversation you don’t want to be involved in.

Unfortunately I’m back in the states now so this move is off the table for a bit. Learned this the hard way when the person next to me on my San Fran to Boston flight asked what I did for a living and I had to explain what Barstool Sports is and why they need a foreign correspondent. No easy task. Just gonna stick to saying “Journalist” and immediately putting on my headphones next time a stranger asks me that question.

Now to be completely fair and balanced, there could be another reason why she chose not to speak to Trump, to save face. The Japanese are obsessed with the concept of “saving face” or protecting one’s honor. In the First Lady’s eyes, speaking broken english to a foreign leader could bring great shame upon her family. If she ever hit publish on a PFTesque blog she would probably end up committing Hari-Kari once the commenters started pointing out all her grammatical and spelling mistakes.

You may think I’m being sarcastic but I’ve met tons of people in China and Japan who have studied english for 8-10 years and are still terrified to say even a word of it to me in fear of making a mistake. Just chill out man. I waltz around China spitting absolute nonsense Mandarin to anyone who will listen and I’ve still managed to save so much fucking face I could be Arya Stark up in this bitch.