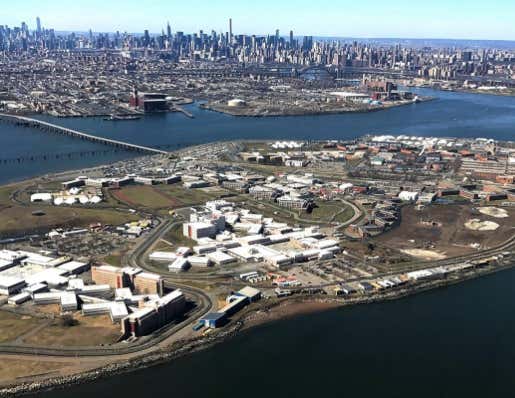 Source –  Bedlam ruled on Rikers Island Wednesday when an inmate hopped a fence and slipped into the night, sparking a lockdown and massive manhunt.

The runaway inmate didn’t get very far. He was captured just before 3 a.m. after two Department of Correction staffers found him still on the island, officials said early Thursday. The NYPD and Port Authority Police aided correction officers in the seven-hour search that encompassed parts of Queens, as well as the waters surrounding the city’s largest jail.

Rikers staff noticed the jail’s head count was off by one at about 7:30 p.m., sources said. The jailbird was identified as Naquan Hill, 24.

One law enforcement source said Hill was seen on video leaving the yard in the complex’s Anna M. Kross Center. The escape sent the island into controlled chaos.  Officers were seen traversing the nearly mile-long bridge to the island, their flashlights trained on the dark water below. Helicopters circled overhead, K-9 units were deployed and harbor units swept the choppy East River currents. Port Authority cops at nearby LaGuardia Airport were alerted.

Meanwhile, hundreds of visitors were stranded on the island for hours. They flooded out of five packed buses shortly after 10:45 p.m., several shouting “Freedom!” and complaining some were suffering asthma attacks and other medical problems.

#GoNaquanGo. If I go to prison it better be somewhere rural. I could handle being locked up in the country. It’d probably be relaxing; unplug for a while, focus on my health, work out. I’d come out rehabilitated and reinvigorated. But prison in the city? In New York City? Everyone enjoying their freedom mere feet away while I’m locked up like a goddamn farm animal? Nope. I’m Naquan-ing every chance I get. I assume our attempted escapee has never seen Alcatraz. All he had to do was paper mache a human head, tie together some raincoats and he’s home free. Hanging around the island getting used to the water temp will getcha’ caught, hombre.

I was rooting for our guy until the last paragraph.

“Meanwhile, hundreds of visitors were stranded on the island for hours. They flooded out of five packed buses shortly after 10:45 p.m., several shouting “Freedom!” and complaining some were suffering asthma attacks and other medical problems”

Visitors flooding out. People yelling freedom. Asthma attacks. May as well turn the bus right back around because if I was on that bus I’m killing someone. I complain when an F train stalls for fifteen seconds, I don’t know how I’d react to seven sweaty hours with the real housewives of Rikers Island.

Even though Naquan wasn’t successful in gaining his freedom he should be proud. He did go viral, and some would say that’s even better.