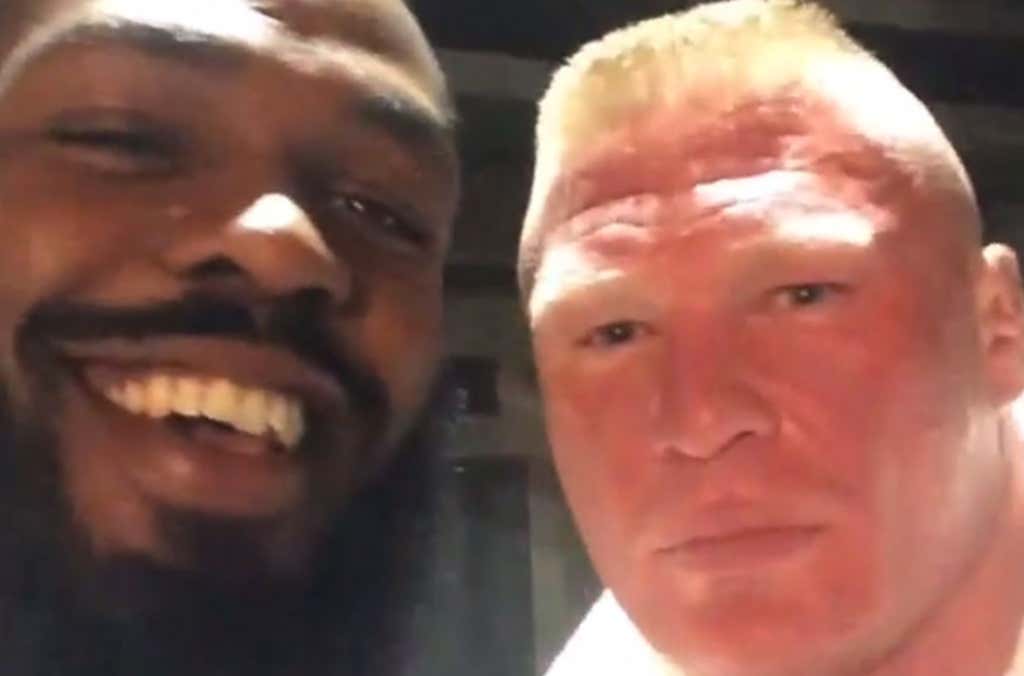 MMAFighting- In other words, Jones vs. Lesnar is one of the greatest matches in terms of revenue that the UFC would ever do. And it seems like they’re both down for it.

“I would love to fight Brock Lesnar,” Jones said in the Facebook chat when asked by a fan. “He’s a massive dude, it would be a massive draw. Really big for the sport. It would be a great challenge. That’s a big, old boy. I doubt Brock Lesnar would take that fight, though.”

Lesnar, 40, made no bones about it to the AP — he would, indeed, take the fight.

“Would I fight Jon Jones? Anytime, anywhere,” Lesnar said. “Right now he should be worried about D.C. on Saturday night.”

Let me preface my take on this with what I said the other day: This will not happen at Madison Square Garden in November no matter what. New Year’s Eve is very questionable, but I don’t think that will happen either. If Brock un-retires and enters the USADA testing pool today, his suspension won’t end until 2018, but they’ve pulled some strings for him in the past, and I think they’ll pull some strings for him in the future.

This is probably the biggest fight that can realistically happen in mixed martial arts over the next calendar year. Conor McGregor completing his trilogy with Nate Diaz for the 155lb title would be huge too, obviously, but you’re looking at one of the best draws the sport has ever seen going up against the greatest fighter to ever step foot in the cage. This would break through to the mainstream world as a serious superfight and pack bars/Buffalo Wild Wings across the country like you’ve seen very few times in the past. I really, really think it’s gonna happen, too. You all know I hate Jones, but he’s probably going to beat DC on Saturday, maybe run back the Gustafsson fight, and then there’s nothing left for him. The Light Heavyweight Division is meh at the very top, and there’s few Jones hasn’t already steamrolled. Brock WOULD provide an amazing storyline if they wanted to go the “we have to bring in a BEAST to stop the unstoppable” route, and it’s just one of those fights you WANT to see. What happens when the best 205er ever meets someone who has to cut to make 265? We’ll see…