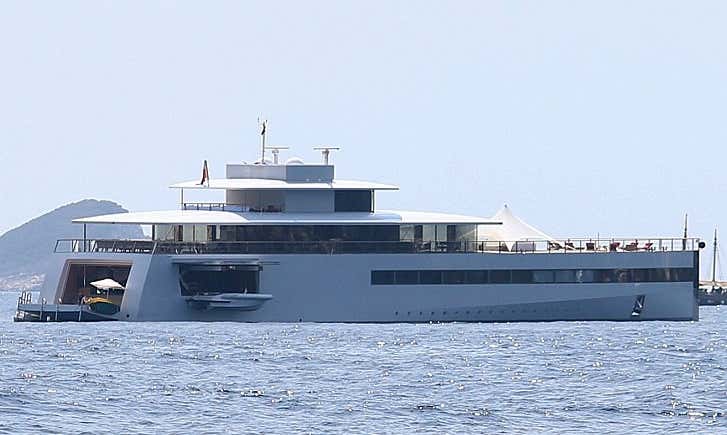 Source - The widow of Steve Jobs and her boyfriend have been pictured on holiday in Croatia with the $100million yacht the late Apple founder built but never got to use.

Laurene Powell Jobs was seen enjoying a day of sightseeing in Dubrovnik with Adrian Fenty, the ex-mayor of Washington D.C, and with her 19-year-old daughter Eve, who had an iPhone tucked into her waistband.

The 53-year-old’s 256ft-long luxury yacht Venus was moored off the coast as they spent time in the historic city. Steve Jobs commissioned the ship in 2008, a few years after his first cancer diagnosis, but he never got to walk on board, since the tech genius died a year before it was completed in 2012.

It has been reported that a row of 27-inch iMacs are used by the ship’s captain to navigate in the wheelhouse. Several summers spent relaxing on friend and fellow businessman Larry Ellison’s yacht convinced Jobs he wanted a boat of his own.

Powell had married Jobs two years after meeting him when he gave a talk to Stanford Business School while she was a student there. When Steve Jobs passed away in October 2011, most of his assets passed on to his wife, making her one of the 50 richest people in the world. She owns, among other things, two private jets, four real estate properties and shares of the Walt Disney Company and Apple, Business Insider reported last year.

First off, RIP in peace to Steve Jobs. Guy was a genius blah, blah, blah. Now that that’s out of the way…a hundred million dollar yacht…that he never even got to use. Mostly because he was dead but that’s beside the point. The point is his wife is peacocking around with her new boyfriend on the yacht Steve built. It’s sort of disrespectful to let another man christen your dead husband’s boat, but on the other hand, what are you going to do, not galavant on the high seas? It’s not her fault he died. The $100 million yacht isn’t going to sail itself around the world, that’s for sure.

The thing is though, I don’t want this to happen to me. When I die I’m taking everything with me, King Tut style. Sure I have nothing to take, but if I did, I would. Maybe it was different for Steve. Maybe he “wanted his wife to be happy” and “enjoy their wealth.” Whatever the case, I don’t like it. Mrs. Doubtfire had it right, “complete and utter celibacy dear.” If I were Adrian Fenty I’d tread lightly. We know Steve’s brain definitely exists in computer form somewhere. Maybe in that row of twenty-seven inch Macs. Wouldn’t shock me if Fenty is found face down in the Mediterranean some time soon.