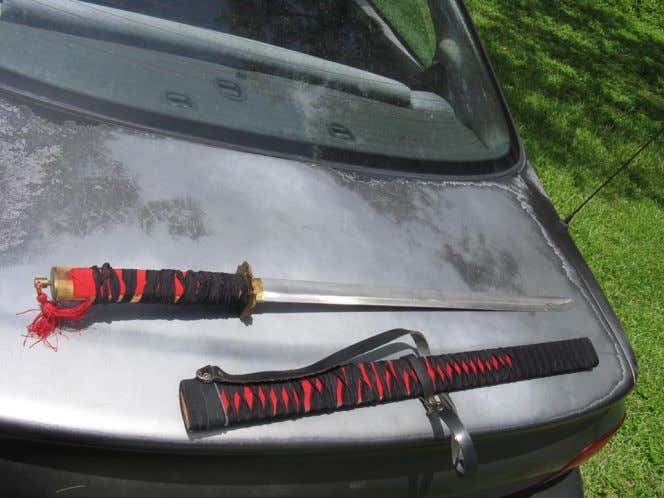 TampaBay.com- A Brooksville man is facing multiple charges after he threatened to kill a couple with a samurai sword during a road rage incident Tuesday afternoon, according to the Brooksville Police Department. Daniel Franklin Seymour, 43, was booked in Hernando County Jail around 2 p.m. and is being on held on $24,500 bail..

Adrian Rivera, 20, and Julian Rivera, 21, told police they were driving southbound on N Broad Street, passing Howell Avenue behind Seymour when — without provocation — Seymour began “brake checking” them and was using obscene hand gestures out of his window while slowing down and speeding up.

But as the Riveras drove past Seymour, they told police he sped up and deliberately struck the right rear fender of their vehicle with his left front fender.
As they tried to pull over, Seymour then rammed his vehicle into the back of theirs, police said. When both vehicles pulled over and the Riveras exited, police said Seymour jumped out of his vehicle and approached them in “an aggressive manner.” When he was told to back off, Seymour went back to his vehicle and pulled out a 25-inch samurai sword from the back seat and declared he was going to “kill them both,” police said.

Seymour was arrested and transported to the Hernando County Jail without incident.

Usually when a crazy motherfucker whips out a samurai sword in a road rage incident, he is the person at fault in my mind. However, myself and countless other scribes have used countless vats of digital ink discussing just how fucked up the people of Florida are. Your head should be on a swivel at all times in the Sunshine State. If you are in a road rage incident, you have to raise the danger warning to red and immediately expect your opponent to be ready to wield anything in a physical confrontation. It could be a gun, a samurai sword, or a rabid pet raccoon. Literally anything in the world is an option at that point like when Gozer put the Ghostbusters in a pickle and told them anything they thought of would appear and destroy Manhattan.

I don’t care if he shoots out your tires or runs you off the road like in the beginning of Christmas Vacation. You do not confront a crazy son of a bitch like Daniel Franklin Seymour when you are inside Florida’s state limits. A samurai sword is almost the best case scenario for a road rage incident involving a guy who goes by 3 names like an assassin. The samurai sword may be the king of Ninja Turtle weapons and weapons of the store where The Gimp got killed in Pull Fiction. But in Florida it’s basically a water gun. Adrian and Julian Rivera better clean it up before the next road rage incident they see, which will likely happen before the end of the week because Florida.