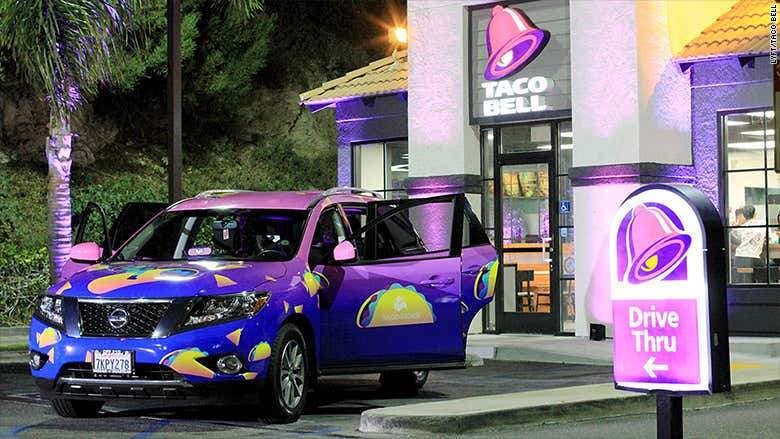 New York Times (fake news) – Taco Bell has, quite literally, found a new marketing vehicle, and its name is Lyft.

The fast-food chain is beginning a venture with the ride-sharing company this week that will allow Lyft passengers to request rides that incorporate a stop at a Taco Bell drive-through between 9 p.m. and 2 a.m. The companies will test the option, which will appear as “Taco Mode” in the Lyft app, during the next two weeks around a Newport Beach, Calif., location, with plans to expand the program nationally next year.

Ah yes. The ol’ “Let’s Do Anything To Appeal To Millennials” model.

Hey, kids! Do you like to get high and or get drunk? Do you sometimes get the munchy wunchies when you’re all sorts of whacked up from a night on the town? Well boy oh boy do we have the solution for you. Introducing…. TACO MODE from Lyft. The official way for you to act like an even drunker, more entitled asshole at 1:30am on a Saturday night. Because with Taco Mode from Lyft, you can force your Lyft driver to swing you through Taco Bell (I know how much you crazy kids love Taco Bell) and then continue to ruin the shit out of their car while you spill your Dorito’s Locos taco all over the inside!

I’m already going to start drafting the blog right now for when the first Lyft driver beats the shit out of some dipshit named Tanner for dumping an entire Crunchwrap Supreme in his back seat. My guess is that blog will probably get posted sometime around Easter of next year. Set your clocks.

And while we’re at it, just be an adult and order your body weight in pizza from whatever pizza shop is down the block from whatever bar you’re at when you leave. Taco Bell is way better as a next day food after drinking, not the night of. Obviously the stoner population would argue that but the last thing I want to do after smoking is get into a car with a stranger so count me out on Lyft’s Taco Mode entirely.