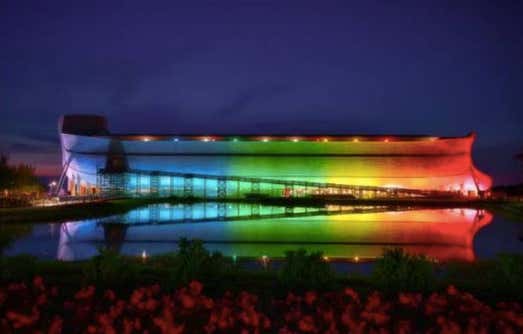 Source – A religious Williamstown, Kentucky, theme park created a stir this week in the gay and transgender community by announcing it will be illuminated in a rainbow light every night. While the colorful new lighting of the Ark Encounter, a large-scale Noah’s Ark replica filled with exhibits, spurred numerous responses from Ark supporters, some in the LGBTQ community made fun of the move.

Ken Ham, president, CEO and founder of the Ark Encounter, announced the new color scheme in a series of tweets on Tuesday, saying that the decision was made to “remind the world that God owns the rainbow.” Ham’s call to “take back” the rainbow dates to at least 2007. He wrote a post on his website, Answers in Genesis, that said the rainbow should be a reminder that God judges sin, but said he would never judge the world with a flood again.

“The rainbow has been used as a sign of a new era and a symbol of peace, love, and freedom,” Ham wrote in the 2007 post. “Sadly, the colors of the rainbow are even used on a flag for the gay and lesbian movement.” While Ham said Christians want to re-appropriate the rainbow, Twitter responses indicated the LGBTQ community and their supporters are enjoying the Ark’s new lighting.

The Ark Encounter is a 510-foot-long, 85-foot-wide structure meant to express the belief that the earth is 12,000 years old or younger and that dinosaurs and people lived at the same time.

Repeal and replace! Repeal and replace! Finally a gay re-brand. At the hands of the church no less. If Ken Ham wants the rainbow, give him the rainbow. It’s outdated anyways. For a group that prides itself on being trendy we can do better. I feel like the eggplant or peach emoji would be a better fit. Dicks and butts are more on brand than rainbows, #amiright?

I can’t believe that no one told him taking this: 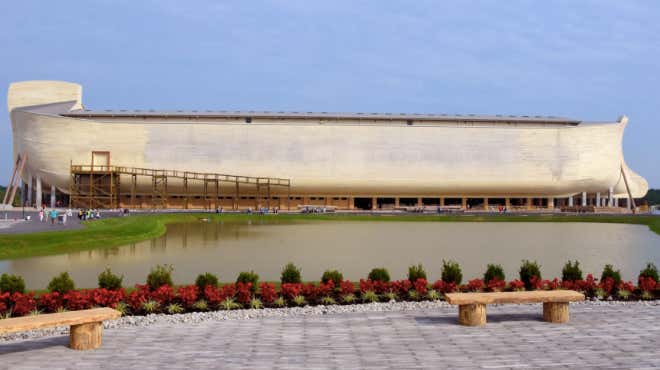 And turning it into this:

Is a bad way to distance yourself from gay people. The rainbow is like our bat-symbol. Flash the colors and we’ll come running. Like this:

Okay I’m done. It’s clear Kenny isn’t God’s brightest child, but this is next level stupidity. I’m sure all the backwoods-Kentucky-queens are on their way to the pride ark right now. Probably decked out in biblical costumes, showing off their Jesus Christ abs. I don’t blame them either. Kentucky has about as much nightlife as they do full sets of teeth. Kidding, kind of.

It’s funny to think that guys like Ken Ham actually exist. So powerful, yet so dumb. We get it, you’re into religion, stop being weird about it. Instead of wasting money on rainbow re-appropriation lights do some actual good. Build a school. Or start a scholarship program. Or feed the homeless. Or do literally anything else at all. It’s always these bible-thumping wack jobs that give the normal religious people a bad rap.