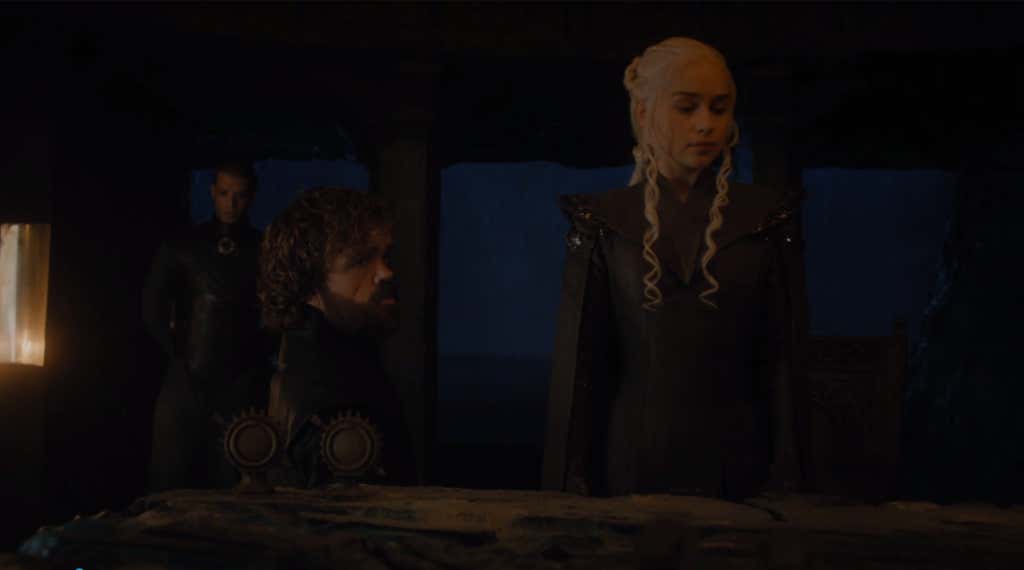 In a shortened season of Game of Thrones, every episode matters. With less time to fully unfold the saga of Westeros, there isn’t much room for excess fat or drawn-out meandering. Every moment has to be meaningful, every episode direct-to-the-point. Was last night the greatest episode of Thrones ever or the most dramatic? No. But it was still highly entertaining and more importantly, compact and dense with useful, highly relevant information. In other words, if you were someone frustrated by the seemingly pointless exercise of watching Arya sweep floors or tertiary characters wax poetic about their backstories of life philosophy to fill up airtime, this season is going to be for you.

This recap will start with how the show ended, Euron’s attack. I think seismic readings probably picked up on a slight shake of the Earth’s crust from the collective groan every Game of Thrones fans let out when we saw the Sand Snakes were back. Watching them scream “MAMA!!! MAMA!!! MAMAAAA!!” like a pack of braying imbeciles encapsulated every reason they suck. There’s nothing worse than an attempt at a badass character when it feels so FORCED. Oberyn, Arya, Bronn, Ygritte: They were all cool because it felt so natural every time they dropped a quote or gave a moment of dark comic relief. The Sand Snakes just give all the cringe-y awkwardness of a high school football coach trying to joke about how hot the 17 year-old cheerleaders are. Can’t say I’m upset two of them are dead.

But woooeeee, the rest of that sequence? Did not see it coming. Everyone was guessing Euron’s “gift” was going to be Tyrion, or the Dragon Horn from the books (a not yet introduced on the show magical instrument capable of controlling dragons). Instead, he’ll be gifting Cersei the woman who poisoned and killed her daughter. Cersei will do things to her that make her treatment of the Nun from last year’s finale look like a preschool timeout. The only thing that might equal her level of sick brutality will be Euron’s treatment of his own niece, remember the actor said he is going to make Joffrey and Ramsay look like little kids.

Unfortunately she’s in the spot because it would appear Theon’s lack of balls is metaphorical as well as literal. Theon has had more chances to redeem himself than Josh Gordon, but he proves himself a gutless coward almost invariably. His only somewhat attempt at being a good person again was when he tried to distract Ramsay’s men from Sansa, and he ran like 15 yards and was mostly useless. I’m #done with trying to find redemption for Theon. Dying isn’t enough. He’d have to die 100 deaths to fully pay for his transgessions and lack of moral character at this point. I’m giving up any hope for that bum.

On the opposite end of the bravery spectrum is Arya. Look, we all knew Arya wasn’t going to head to Kings Landing. It’d be the end for either her or Cersei, and an anticlimactic one. Both of them are sticking around for longer than that. But I hope Arya gets involved in things up North, and fast. Arya hasn’t been directly relevant to the larger plot for a few seasons now. Between her being a vehicle for cameos from Hot Pie, Nymeria, a Walder Frey kill and Ed Sheeran, right now Arya’s scenes all feel a little fan service-y. She deserves more than that. While I don’t know how assassination skills would help in a battle against the Night’s King, I hope she finds a place, and I’m happy she can have a larger purpose than just revenge. Maybe that place isn’t in King’s Landing at all however. I hear a certain Hound is heading up the same direction, and they might have some unfinished business with one another.

*A quick note on the Nymeria scene significance: The show creators say Arya was accepting that Nymeria has gone wild, just as Arya has gone wild. I think that’s part of the equation but not all of it. What I mostly took away from it was that Nymeria knowing who Arya was but not joining her shows that while there is some core of being “Arya Stark” left, who she is as a person is mostly destroyed. She’s a soulless killer now, completely transformed into something else. I hope whatever part of her is now gone, when she goes up North, she gets it back.*

Hot Pie isn’t the only fat man in Westeros, and our guy Sam Tarly is still kicking it in the Citadel and dragging us reluctantly along to watch him like having to go to your niece’s dance recital. It doesn’t help that it appears we will be forced to throw-up at least once per episode with Sam. His rescue of Jorah Mormont is nice, but I still question what use Jorah can still have to the show even if cured. I guess we’ll find out soon, but I don’t see how he’ll become anything besides superfluous. Sam’s constantly willingness to break the rules is going to get him in some SERIOUS trouble with the maesters, it’s a matter of when not if. It doesn’t help that his contributions seem to be mostly ignored and not taken seriously. Like many academics, the maesters seem unable or unwilling to accept that someone’s life experience outside of scholastic study could make a serious contribution to their worldview. It’ll be a problem once Sam realllly needs to load up on information about fighting the Walkers.

I guess as I’m finishing up recapping all the secondary storylines I should talk about Grey Worm here, but I watched the episode with my parents and it was truly, deeply uncomfortable for me so if you can all just let me block it out of my memory and pretend it never happened, I would appreciate it.

For the main action of the story, the meat and potatoes as it were, we have the conflict brewing between the three main power players of the continent: The Lannisters, the Targaryens and the Starks. Let’s look at the tale of the tape with a quick power ranking of how favorable of a position they’re each in.

However much trouble you think Cersei is in, double it. When House Tarly are the people you have to invest the bulk of your political capital in, that doesn’t exactly scream of being in a place where you have a lot of options. Cersei still has the confidence of her most trusted person in the world, Jaime, but everyone and their mother is predicting that that will be lost at some point and one will be forced to kill the other. They’re surrounded with Euron as their only ace in the hole, but he’s crazy and insanity is a blade that can cut both ways. Qyburn is clever and thinks outside the box, and maybe those bolts can take down a dragon, but will it be able to take down three? I have my doubts. From a military perspective, it’s hard to see a way out of being surrounded with a superior force, a dwindling support base at home and winter coming. Cersei has to convince the people around her to join her is like trying to convince someone to sign with the Knicks so they’ll have a shot at beating the Warriors next year. Of course, the last time Cersei was this desperate she slaughtered the entire nobility of Kings Landing in one fell swoop. Can she make lightning strike twice?

Like all the best dysfunctional relationships, Jon and Sansa are acutely aware to recognize the problem but are no closer to solving it. Jon still has little to no political instincts or any inclination to bend his ironclad morals for even a second. I guess the death of his father, his brother, his other brother, his Lord Commander mentor and oh yeah HIMSELF wasn’t enough to teach him about the importance of political flexibility. And Sansa hasn’t learned to never undermine Jon in front of people. They really could be the perfect team if it all just clicked, but there’s no sign of that currently. Of course this all gives the perfect opporitunity for that snake Baelish: He doesn’t care even a little bit about the White Walkers, he’d gladly watch the entire continent die and turned to Zombies if he could rule it for it’s final moments, he’s already shown the ability to rattle Jon and knock him off balance, and he knows he has real power over the North. You almost wonder if Jon is too stupid for Baelish’s manipulation to work on him, that he’s so apolitical he’ll almost be bulletproof to the politics game sorta like how Trump was weirdly the perfect person to run against Hillary Clinton. Jon is very, very, very brave. He is also very, very, very stupid and no one else understands the depth of the White Walker threat like he does. I have no idea if he is going to be willing to bend the knee to Dany but if he does, he could have a Northern uprising on his hands that could be the (second) death of him. Which he means he’s probably going to. That brings us to…

Very generous decision of Dany not to execute the man who had just gone there-and-back-again between two continents like five different times to advocate for her. Nice woman. It makes sense that there will be complications for Dany taking the Throne, because it seems almost SO obvious that she would steamroll her way there that there have to be a few thrown wrenches. Her alienating Varys is idiotic however, to be a foreigner who’s never spent a day of her adult life in Westeros to risk pissing off the one guy who knows everything that happens there. The shot of Grey Worm and Misandei during Varys’s speech about being baseborn also shows the common people are going to identify a lot more with people like him than they do her, and that’s the mandate of approval of the people she desperately craves. A Jon/Dany alliance has seemed inevitable for multiple seasons now and we’re about to find out just how it’s going to go down. Of course the Azor Ahai prophesy could refer to either one of them, but I’ll talk more in-depth about that at a later time in a full blog about the magic and religions of Westeros. For now what we know is that Dany seems unwilling to take Westeros with as much fire and blood as her predecessors would, but as the Yara/Ellaria disaster just proved, the best laid plans might not go as smoothly as she might hope it does. Especially in a Throne room with her, Tyrion, Olenna Tyrell and Varys. That’s a lot of egos in one room, with a lot of in-fighting already before anything had even gone wrong. Well now something has. Will they be able to deal with it or will they point fingers and tear each other apart? The Targaryen power structure seemed almost inevitable to steamroll it’s way to victory. Maybe the biggest threat to it is itself. The siege of Casterly Rock will be revealing in how it’s planned and executed.

That’s it from me. The Postgame of Thrones podcast is live on Youtube below. Please watch it, I think it’s a good show but I am biased. This week our guest was ESPN’s Mike Golic Jr. He’s a great dude, enjoyed having him on. Remember to DM me on Twitter (and follow me maybe!!?) @CharlieWisco your Game of Thrones questions and I will answer them in a Mailbag that will be posted every Sunday morning before the show. Have a great week everyone, see you next Sunday.