I hope everyone has been soaking up Shark week so far! Phelps vs. Shark ended with a big W for Sharks and the Virtual Sharks everywhere. There have been so many good shows and additional content online that it is easy to forget the details.  Well one thing you learn, while never studying for a single test earlier than the night before during your entire academic career, is that it is always easier to learn new things when they are related to something familiar.  So with the goal of Shark knowledge for the commmon man in mind, here are 10 species of Sharks and the Barstool personalities they resemble.

Sand Tiger Sharks are vicious looking but not exactly that dangerous.  They feed on fish and their long menacing teeth are actually perfectly suited for catching schooling fish rather than tearing flesh.  However these facts are not the reason for them being the complete soulmate to our friend PFT Commenter.   The reason for this comparison is due to their behavior before any water moves through their gills.  Sand Tiger Sharks engage in a reproductive strategy known as “intrauterine cannibalism”.  What this means for all the non-marine biologists out there, is the embryo that develops first eats the other embryo in order to be the one who gets to be born.  I’m trying to think of a grittier thing in history than a creature that literally has to kill its own sibling or be killed by its own sibling before it leaves the friendly confines of its mothers stomach.  Pad Level – 20,000 leagues under the sea.

Not a Shark but Shark Related Fish Category – Remora – Gaz 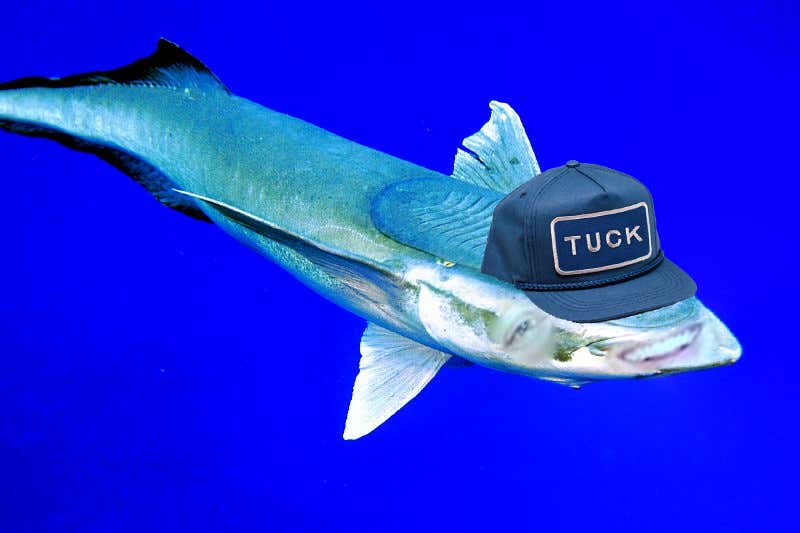 The Remora is an amazing fish.  They have the unique ability to latch onto the leathery surface of apex predators and feed off of the scraps that become available while the larger predator feeds.  They don’t hunt or swim very much themselves but rather hitch rides around while the larger host takes care of them.  I don’t know if I should say anything else. 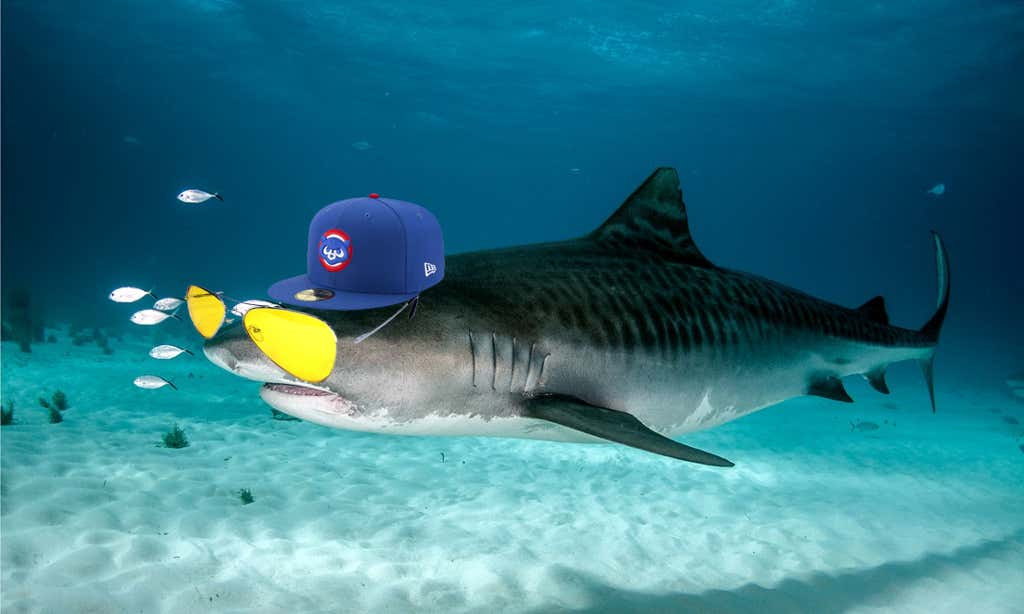 Sometimes the comparisons just write themselves.  Two giant cats and two entities that accept just about any edible object into their mouths without hesitation.  Before I worked here I thought the Big Cat eating a lot schtick was just an exaggerated joke.  However, after seeing the human embodiment of Galeocerdo Cuvier cruise around the office inhaling everything in sight from sour worms to beef jerky and pork rinds, I soon found out the reality of the situation.  Its not too much of a stretch to imagine cutting open the stomach of the AWL’s hero and finding a license plate or trash can lid. 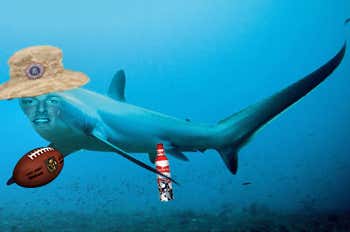 The Thresher Shark has a pretty standard shark body and teeth.  From the anal fin forward you might mistake it for your average shark.  But let’s talk Caudal fins for a second.  The Thresher Shark makes its money with its gigantic tail that it uses like a goddamn whip to instantly stun fish before circling back to eat them.  Besides the obvious comparison of doing activities that involve a shitload of CTE, its impossible to ignore the fact that without the body part that they use for locomotion, Pat Mcafee and the Thresher Shark would may have been shit out of luck.
(This was a very tough call to not match Pat up with the Bull Shark for their propensity to swim in fresh water) 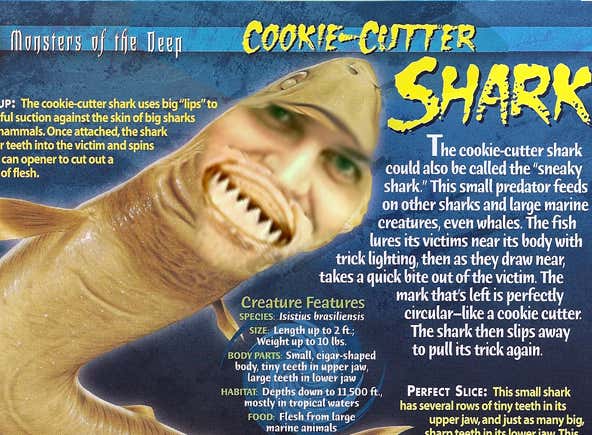 The Cookiecutter Shark is small and uses quick sneak attacks to take small circular bites out of larger prey. They have no fear and appear out of the depths at any moment.  The Cookiecutter doesn’t aim to kill their prey but rather take bites out of their flesh and then retreat back to safety.  These bites can be seen as scars on large deep water pelagic fish.  They are also fairly weird looking with giant lips. 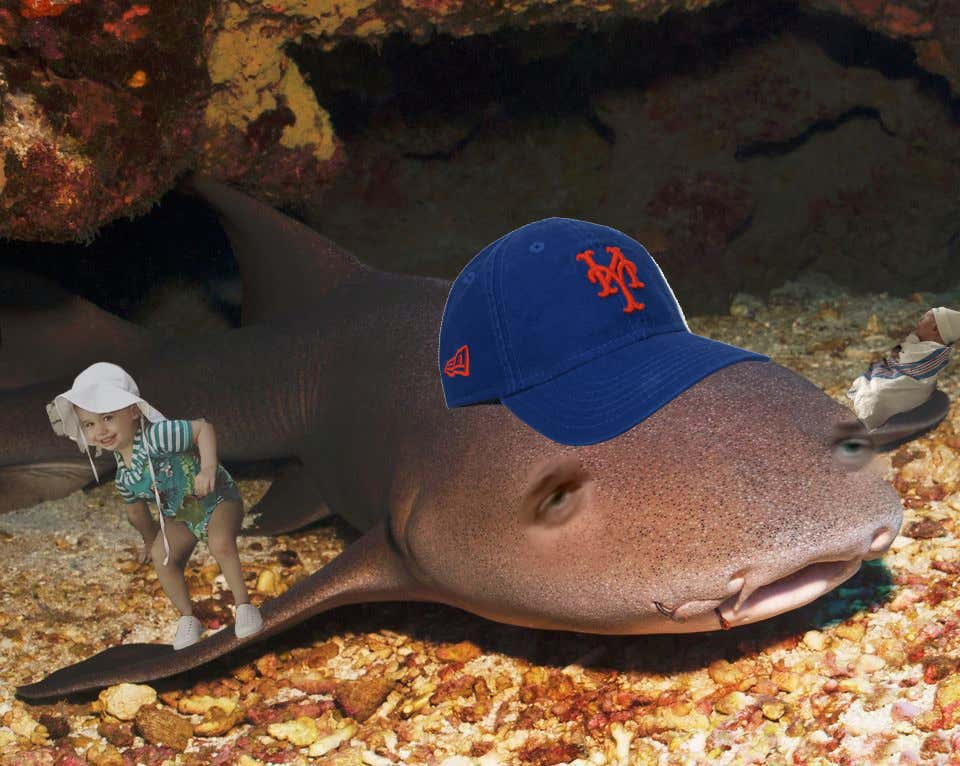 The mail time king!  The Nurse Shark, also known as a gummers or wet rags on certain docks in Florida, are the kings of not exerting much too much energy.  They can be found sleeping under ledges for most of the day and also are prolific scavengers picking off the easiest types of food.  Continuing with the mail time theme, these sleepy sharks are often found around docks living off of scraps fisherman throw into the water.  Minimum effort, fake it til you make it life.

They are also so aloof you can pick them up with your bare hands. 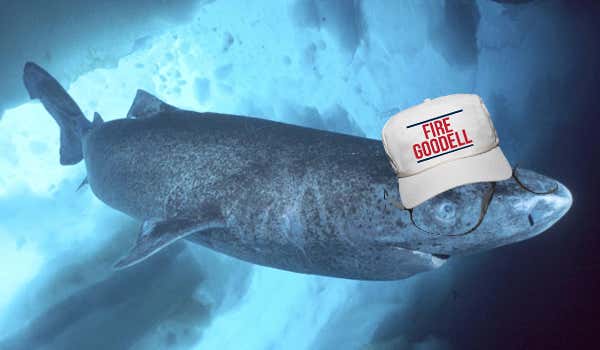 I mentioned them in my Shark Week preview Sunday Night but I have to extrapolate more.  The Greenland Sharks populations are still being affected by pre-WWII overfishing.  If that doesn’t make sense let me clear it up,  these sharks are old as SHIT.  They are believed to reach sexual maturity at 150 years old!  One hundred and fifty years old is a college freshman Greenland Shark.  Scientists used radiocarbon dating on the lens of a Greenland Shark last year to determine it was around 400 years old and potentially as old as 512.  That is absolutely absurd.  They also have been known to be very interested in Sex Scandal Teachers which is unusual in the animal kingdom but hey what can you say SST stories are fascinating. 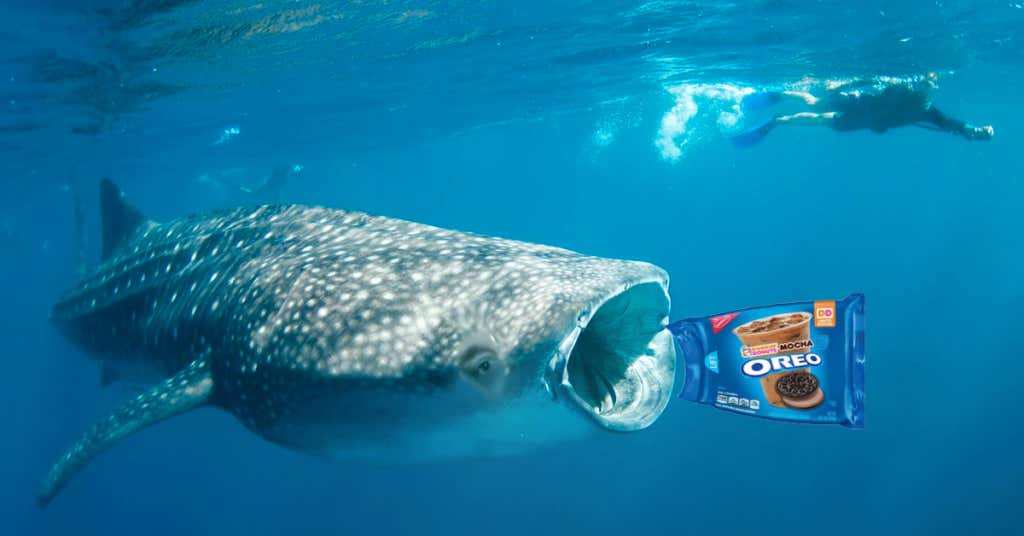 Whale Sharks are some of the largest animals on planet Earth. They are absolutely ENORMOUS.  They are also some of the kindest animals on the planet.  The same can be said for our James Dolan hating blogger.  Clem gives the best hugs in the company and is always genuinely kind when you see him. 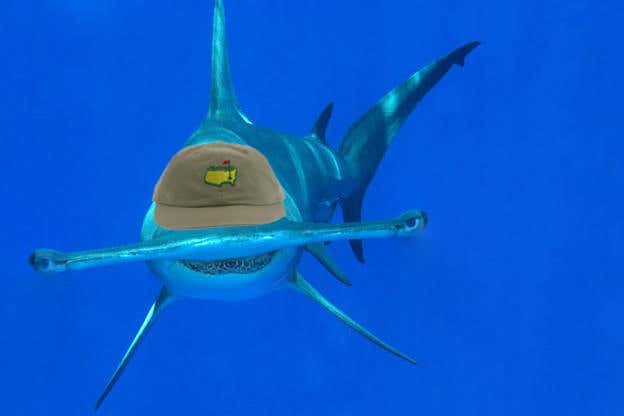 Hammerhead Sharks are known for their extreme sensory advantage due to their wide head.  Just as Riggs scours over political breadcrumbs searching for the easiest way to explain complicated geopolitical issues, the Hammerhead scours over the sandy ocean floor in order to find well hidden rays and bottom fish.  Yep, these are all of the reason why Bozo is comparable to a Hammerhead.  Can’t think of anything else.

Almost too obvious but you still have to put it in. 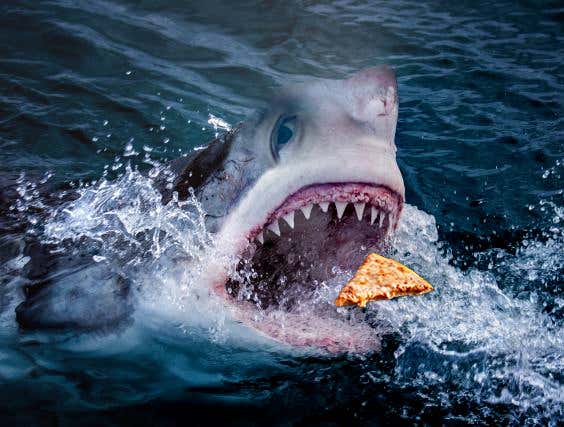 You had to see this one coming.  There’s only one place you turn when you need the job done, and thats the big dog.  Through decades of Shark Weeks and hundreds of thousands of blogs and videos, one man/species continues to put asses in the seats no matter what.

I was also lucky enough to sit down with two of the stars of Discovery’s Shark Week for a couple very interesting interviews.

Paul De Gelder
Barstool gets a TON of cool guests. People that won Stanley Cups, won NBA scoring titles, WWII veterans, you name it. So I say this with full awareness of the meaning. Paul De Gelder is one of the most badass, impressive, cool people I’ve ever read about or spoken to in my life. While an Australian Navy Clearance diver, he was attacked by a Bull Shark in Sydney Harbor and lost his right arm and leg in a matter of 10 seconds. This only makes it harder on us losers when you consider right now that he could steal your girlfriend in less time than it took that shark to change his whole life.

Here is footage of that attack

I also was lucky enough to interview a real shark scientist and star of Shark Week, Craig O’Connell.

Shark Week continues this weekend and I am excited to see what we have left in store.