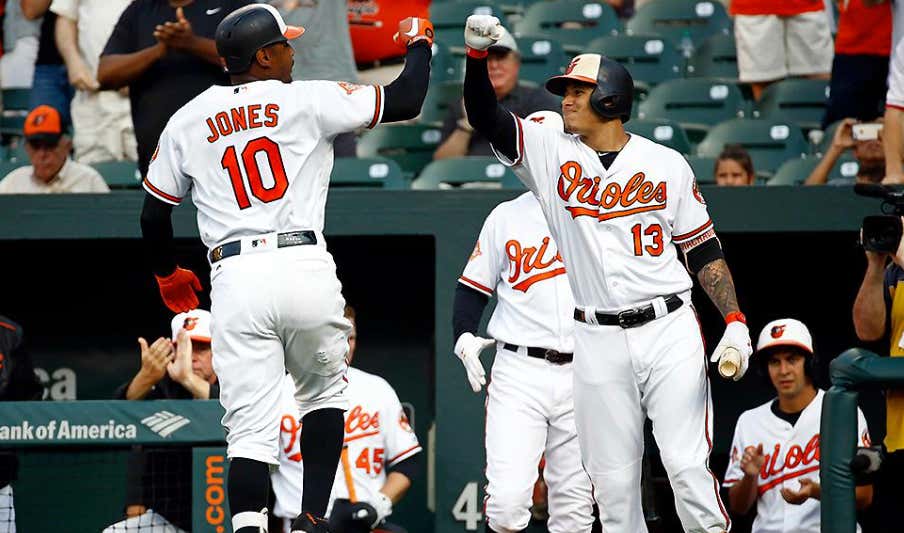 Are they back? Are the Baltimore Orioles back?!?!?! Not quite. They were absolutely EMBARRASSED by the Cubs coming out of the All Star break and everyone and their mother was ready for football season. Fast forward to the Rangers rolling into town, and the O’s look like the best team in the league. Like clockwork, right when they announce they plan to sell, they turn it around. Small sample size, I know, but it’s nice to see a spark lit under them, and string together a win streak. 46-49, 6-4 in their last 10, 3.5 out of the Wild Card spot and 7 back in the division, O’s are playing just well enough to make you think they can make some noise. Red Sox have played like crap the last few games, and the Yankees are in a serious relationship with our good friend “regression. I’ll tell ya what, you absolutely HATE to see that happening.

One of the reasons the Birds had a good week? Manny Machado is starting to act like Manny Machado again. He’s 17 for his last 44, good for a .386 over his last 11 games. 2 homers and 8 RBI in that same 11 games. He’s moved up the 2 hole, so he’s the guy protecting Jonathan Schoop, Mark Trumbo, Chris Davis, and Trey Mancini. Those guys have combined to hit 67 homers, so you’d think that Manny will start seeing better pitches to hit, and that seems to be happening. His numbers still aren’t what you want to see out of the MVP candidate, .237/18/49, but if you look at his month of July, .323/3/11, he’s starting to look much better and play like the Manny we know he can.

Another reason the offense clicked these last few games, well that is the Crusher. Chris Davis is back from his oblique injury, and he found his power swing against his former team. He came off the DL and fell right into a 1-14 slump, but during the Rangers series, we saw that Crush power. He had 3 homers in the 4 games against Texas, including 2 in Game 2 of the series. Even with him missing over a month, he’s still got 17 homers, and 34 driven in.

The usual names chipped in this series too, Trey Mancini had a huge game Wednesday when he had his 15th home run of the season, and drove in 3 to bring his RBI total on the year to 15. Not bad numbers at all for a guy who most people thought would be platooning the rest of the year. Adam Jones has found a new best friend, and that best friend is right field. Every time I looked up, he was poking one into right. He had a nice Texas series too, 7-17 (.411), with 2 homers, and 5 driven in. Again, he’s quietly having a good year with 17 homers and 45 driven in, while playing excellent in center.

Jonathan Schoop is turning into one of the best young players in the game, he’s showed it all year, he showed it in the All Star Game, and he he showed it in this series. Schoop had 7 hits in the Texas series and 9 driven in, bringing his season average to .302, and he added his 19th homer of the year to lead the club. Yes, Jonathan Schoop leads the power hitting Orioles in homers, not Manny Machado, not Mark Trumbo, not Chris Davis. The young second baseman. Happy to see the youngster play his ass off and finally get recognized for it. It was great to see the O’s tag Cole Hamels, he hadn’t given up a run in 24 innings, then the O’s tag him for 3 homers and 7 earned runs.

But let’s be real, the main reason the O’s swept the Rangers was the starting pitching. Don’t get me wrong, scoring 34 runs and having 49 hits in a 4 game series is great, but it always starts with pitching. Chris Tillman started Game 1 and gave up 2 hits, 1 run, 4 walks, and struck out 3 in 6 innings. Considering his ERA was 7.90 before the game, I’d say that start was a step in the right direction.

Tillman was followed by Dylan Bundy throwing another quality start (13 in 19 starts). Bundy gave up a homer to Shin-Soo Choo on the second pitch of the game, but he settled down, didn’t give up another run, and the O’s rewarded him with double digit runs. Bundy threw 6 innings, gave up 4 hits, struck out 4, and only walked 1 on his way to his 9th win of the year. Right behind Bundy was Kevin Gausman who got ripped apart by the Cubs last week. We saw a different Kevin this week. Gausman looked the best I have seen him this year as he locked down his 6th win of the season as he went 6 innings with 4 hits, 2 walks, 1 run, and 8 Ks. That’s right, you guys. 3 back-to-back-to-back quality starts for ORIOLES pitching, pretty crazy. Wade Miley was his normal Wade Miley self in the Orioles 9-7 win last night. 5 innings, 5 runs, 7 hits, 4 walks. Those kind of starts are doable when the offense is scoring like the Orioles scored last night.

And just as the O’s and Owner Peter Angelos announced that he was giving the “okay” to trade away the top bullpen pieces and Seth Smith, the O’s rip off 4 straight and now sit 3.5 games back of the second Wild Card spot. SO YOU’RE SAYING THERES A CHANCE!!!!!

The rumors are out about the Dodgers, and Astros being interested in Britton. Both teams mentioned have plenty of young talent to offer, it’s just up to the O’s to see IF they want to get rid of Britton, and how much the teams are willing to give up for a closer under team control for a few more years coming off an injury scare. The second Wild Card spot makes it much harder to just drop it all and sell. Unless your team is in a real free fall, they really aren’t out of the race for that last spot. I think this Britton rumor is something to keep your eyes on though. Rumor has it that there has been interest in trading him since the offseason (when I thought they should have traded him). Since the offseason, he’s been on the DL twice with injuries. I doubt the Orioles get a Aroldis Chapman or Andrew Miller type haul for Britton just because of the injuries. But hell, if the O’s keep playing like they are their last 4 games, they won’t be selling, THEY’LL BE BUYING!

Not ideal when you are trotting out 2 starters with ERAs over 7, also not ideal when Ubaldo Jimenez is still starting for your team. Part of me wants him to get shelled and have the Orioles finally cut the cord. But obviously I want him to win. Whatever, he sucks. They can drop the first game and still take the series, but it won’t be easy. Orioles caught a break with Carlos Correra out for a while with a thumb injury, which stinks because he’s an unreal great player, but I won’t miss him here. I’m not fully back on board yet, but if the O’s can take this series, they may reel me right back in.