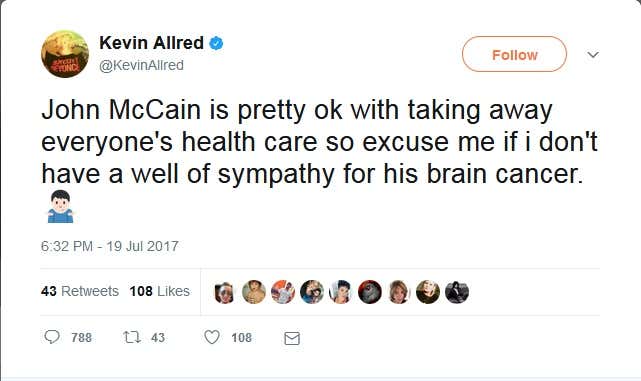 What in God’s name is a “Beyoncé Professor?” #lol pic.twitter.com/PQh8ige1Tj

Leave it to James Woods. Nobody, and I mean nobody, lives the life of a semi-retired show business icon like he does.  The man does some great movies like the criminally overlooked Salvador. He gets stalked by Sean Young at the height of her powers to the point courts ordered her to stay away. He got a plum gig voicing Hades in Disney’s Hercules. By all accounts he sports one of the biggest wangs ever to swing its way through Hollywood. He’s voiced himself in The Simpsons and Family Guy. The vast majority of actors would take that and ride out their golden years collecting royalty checks and banging barely legal escorts.

But that’s not how James Woods is wired. He spends his days searching Twitter for obscure, far-left crackpots to expose. It’s like hunting. Except he’s out to bring down ultra-liberal nutjobs. And today he bagged a real trophy animal for his wall.

This Kevin Allred is the first Beyonce’ Professor I’ve come across. So I’m not sure what exactly they do. Whether degrees are offered in Bey Studies or if it’s just an elective. Either way it’s news to me. And if there are others in this field besides Allred, I’m going to proceed cautiously and not just assume they’re all rooting for John McCain’s horrible death. As batshit as most of academia seems to be – and I’m sure there’s an unhealthy percentage of regular professors who are also cheering for cancer in its battle versus McCain – I’m not going to judge a whole profession on the basis of one piece of human shit.

For all we know, Beyonce’ education is a noble profession. And they appreciate an old man who served his country, was captured and tortured by the North Vietnamese. Who spent five years in that pit of hell. And who was offered a deal to be released but refused to leave his men behind and was tortured even worse because of it. Yeah, the Beyonce’ Professors I know (total: zero) would never take brain cancer’s side over a man of honor like that. Thankfully we’ve got a man like James Woods keeping an eye on the ones that do.